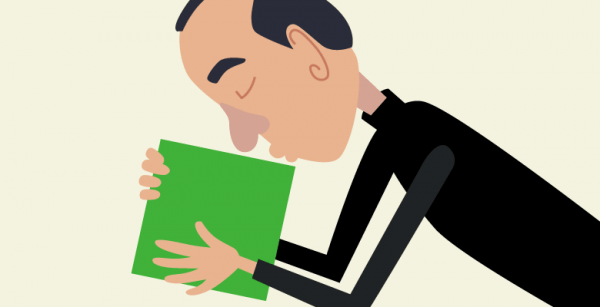 The games industry is home to many people who spout creativity, genius and insanity (the three of which are not mutually exclusive) from every pore. None are more (in)famous than Peter Molyneux, whose unbridled enthusiasm for the projects he works on has led gamers to take his promises with a grain of salt.

The parody Twitter account, Peter Molydeux, has taken this passionate, creative genius to the next level, spewing forth hundreds of game ideas that range from the ridiculous (“playing a character who is PRETENDING to be blind, so you have to keep bumping into things to not arouse suspicion“), to the intriguing (“I designed a point and click adventure many years ago where you had to gain the trust of the pointer so it didn’t lie to you“), to the genuinely moving (“Do you know what I’m fed up with? numbers in games. Don’t show me how I’m doing with a number, show me with a smile or a tear“), and every shade in between. Obscurity aside, most are plausible game mechanics.

On March 14, Double Fine’s Anna Kipnis Tweeted jokingly-but-open-to-it-being-taken-seriously that a game jam based on the ideas that pour out of the Molydeux Twitter feed would be awesome. Molydeux agreed. And two weeks later, it was a thing.

The “What Would Molydeux?” Game Jam was held in over 30 cities in 14 countries last weekend, with participants working to build a game prototype based on a Molydeux Tweet within 48 hours. The MolyJam became a kind of meta-game: its fast conception and execution (not to mention success) was somewhat indicative of the games it would spawn. 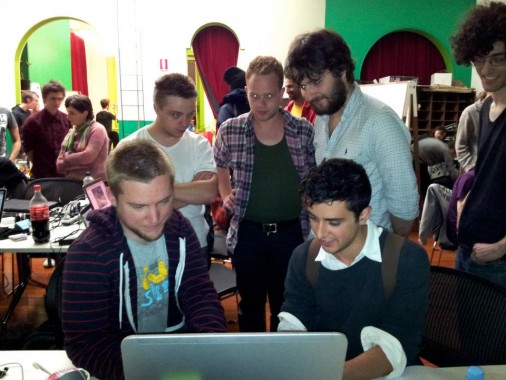 I wandered into the weird old building on Bourke Street, Melbourne, which was (according to word-of-mouth but not backed up by any visible signage) home to The Hub, where the Melbourne branch of the MolyJam was taking place.

I knew I’d found the right room when I was greeted with someone humming as he rubbed his face against his iPhone, a girl cutting green-dyed onions, and jammers playing a game wearing old-school coloured-cellophane 3D glasses – with red in front of both eyes. It was great to see the ridiculously creative/creatively ridiculous spirit of Molydeux was being upheld.

I had no idea what was going on, but I liked it. It wasn’t until the groups held presentations explaining their projects, that I learned exactly what the madness meant. 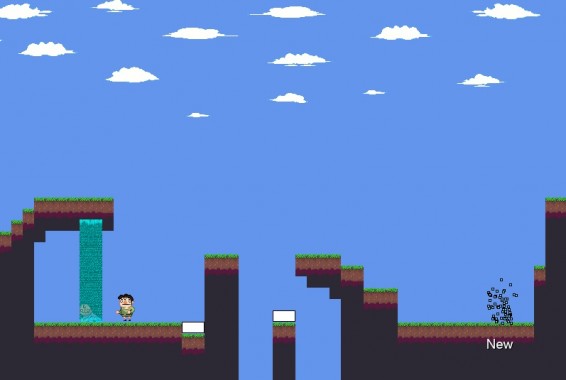 The Tweet, “You grow from baby to old man and back to baby and this keeps looping every 10 seconds. Small gap? Time it so you can go through as a baby“, inspired the game “Old Man Babby”. Created by Andrew Brophy, James Rhodes, Matt Parsons and Guy Noble, the game has you play a man who swaps between his baby, adult and elderly selves. Each form has advantages and disadvantages, and you have to use them all to solve platforming puzzles. 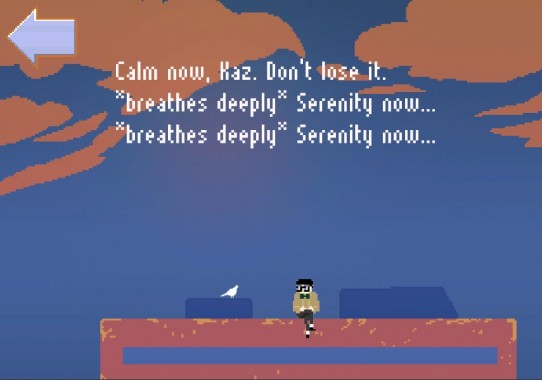 Molydeux Tweet: “You are a pigeon who must go around the city trying to persuade business men not to jump off buildings by retrieving items from their home.”

This Tweet was a popular basis for games, but the Melbourne entry wins for best title. From John Sietsma, Trent Kusters, Simon Boxer and Guy Noble, “Don’t Deux It!” casts players as the Dr Phil of pigeons, flying around to suicidal businessmen on rooftops, listening to their problems and trying to help out. They claim secondary influence from the Tweet mentioned earlier about less numbers, more emotion: as such, the problems are real(ish), the answers aren’t always obvious, and there’s no score for how many you save or let jump. 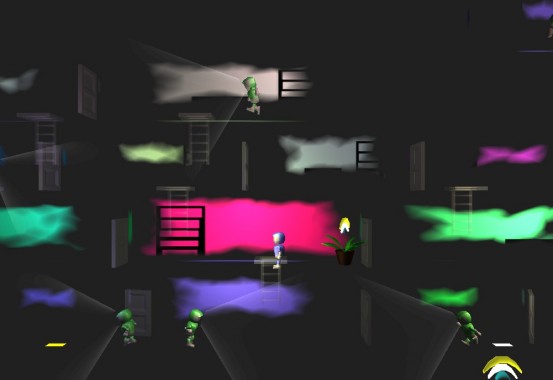 “Imagine being a spy in a game world where the entire environment is transparent and so you can’t hide.”

It sounds ridiculous, but this is one of those ideas that can be pulled off with some out-of-the-box thinking. Matthew Price and Chad Toprak’s self-explanatory “You Are a Spy and Everything is Transparent” takes an interesting approach to stealth. Rather than not letting enemies spot you – which they’ll do constantly, because you know, everything’s transparent – you have to avoid being seen performing dodgy acts: namely, planting listening devices hidden in pot plants. 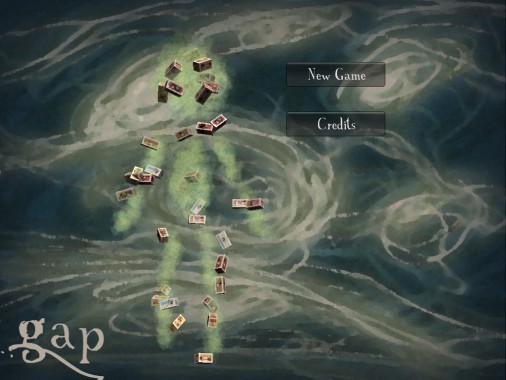 “Your child is made of Lego, you have to detach bricks to make bridges etc. You need to keep adding bricks to stop him getting depressed.”

The team adapting this one, including Justin Whitfort, Tim Mutton, Joshua Bradbury, Rebecca Knight, Matthew Parsons and Shelley Du, took this Tweet as a metaphor, and turned it into “Gap”, a game about using a child’s memories as building blocks. It essentially asks players to slowly destroy something they love in order to save it. A sense of loss follows, and the memories which flash up on screen also have a bittersweet feel to them. 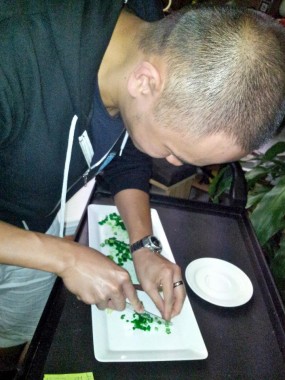 It wasn’t just video games, in the strict definition, being developed. Shelley Du took a Tweet about a single green pixel making players cry, added a comment on gamers’ tendencies towards violence, and produced the physical game “Severance”. Players are given a knife and must quickly cut green pixels into smaller green pixels. Interestingly, about 90% of participants actually cried during play. The fact that the “pixels” are bits of onion in green food colouring is irrelevant. Whether it’s a sting in the eyes or a sting in the heart, Severance invariably made players feel something.

The creative whirlwind that is Harry Lee, one of the Melbourne MolyJam organizers, wasn’t content with making one game-changing game in 48 hours. His fingerprints are all over several projects – including one that has strange cheek-prints on it.

Fazor (or Face-Razor) came about from a Tweet where Molydeux claimed to have used his tongue to sucessfully play a game on an iPad. Fazor inverts your usual shaving habits by having players use their face as a razor to shave their iPhone. Simple, but there’s a few ingenious additions that spice it up. With your face pressed up against it, you can’t really see how well you’re doing (unless you use your eyebrows maybe? I’m gonna have to try that next time). Nothing will happen unless you hum or buzz, and oh yeah – at ten-second intervals the camera will take photos of your nostrils, forehead, chin, and other faceparts unidentifiable so close up.

It’s this playful nature that makes Harry such a fountain of originality in the local games community. Playful not just in person (last time we were out for drinks, he had everyone get up and play slow-mo ninja games right there) but in how he tries to play with the well-worn conventions of game design.

Another little project of his was less a game and more a prototype for a mechanic. Players are given glasses with red cellophane lenses, and while playing you need to alternate between wearing and not wearing them. On or off, the glasses will alter your perception of the game world – essentially, they hide certain colours from your vision, meaning a path through obstacles may become clear with them on, but a useful pickup might be missed. Even enemies can change: a dog that normally looks vicious suddenly appears cute when viewed through the glasses. It wasn’t very gamey yet, but the basic idea is fascinating, and game possibilities can be extrapolated from there. 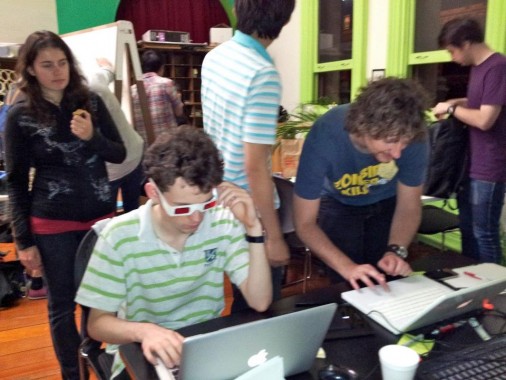 All the games from the Melbourne branch of the event (and beyond) exhibit similar creativity, and are not ideas you’ll find the big name publishers doing. It’s exciting that what began, presumably, as little more than a joke, has evolved into a serious attempt to reinvigorate the stagnating video games industry. Molydeux’s parodies of enthusiasm and creativity have sparked genuine creativity, from himself and his followers. Sure, the game ideas flowing out of him sound ludicrous, but that’s the point – they seem really out there because we’re so conditioned to shooting aliens from behind cover, experiencing “character development” as weapon upgrades, and overcoming physical obstacles more so than the emotional barriers we actually face in life.

The games created in Melbourne and around the world during the MolyJam are available for free download here.