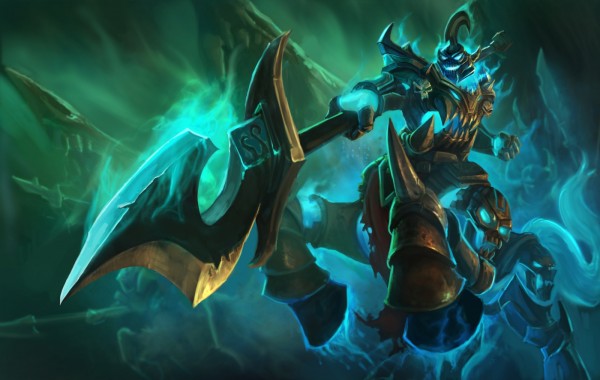 The Fields of Justice warmly welcomes new champions, and the latest addition is Hecarim, the Shadow of War. This quadruped is a massive centaur that wields a devastatingly long spear that can cleave minions to pieces. Boasting incredible speed, the champion can be used as a ganker to kill weakened or unaware opponents. Other summoners may think they can avoid this beast by weaving through minions. However, this ghostly visage can ignore such collisions and charge straight towards his victim.

The northwestern shores of Valoran have been hosts of many strange occurrences, but the arrival of Hecarim was terrifying. As the ghostly apparition strode through the plains of Valoran only a mark of destruction lied in its wake. People began fleeing their homes upon hearing the tales of a creature of death. As Demacia’s gate overflowed with these refugees, a commander took initiative to hunt down the beast.

With a handful of Demacia’s finest warriors, the commander soon found the line of Hecarim’s path. As the soldiers bravely intercepted the quadruped they soon realized their fate. Overwhelmed by fear, the soldiers could do little to avoid the the beast’s wild spear and trampling hooves. Hecarim bore down and massacred each foe until he came upon the leader of the brigand. The commander was crippled by the weight of the centaur and awaited his certain death. The ghostly figure uttered, “This is merely the beginning. No mortal army can withstand the might of the Shadow Isles.”

Hecarim reached his destination, the Institute of War. Demanding a place in the League of Legends, the quadruped found little resistance as the doors had already begun to open.

League of Legends offers $5 million as prize in Season Two