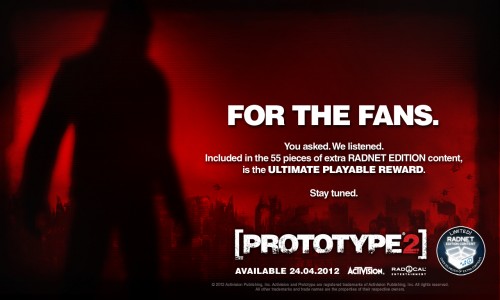 The Radnet Edition of Prototype 2 is only getting bigger if a cryptic message from Activision is led to be believed. With a human figure hidden in its own shadow, the above picture states that, included in the 55 pieces of the extra content included in the Radnet Edition of the game, the ultimate playable reward will be given to players. However, the reward in question is unknown. Whatever it is, there is a belief that it could be worth the wait.

Prototype 2 follows Sgt. James Heller’s desire for revenge against Prototype’s protagonist Alex Mercer after the death of his wife and daughter due to the second outbreak of the virus. After their first meeting, Mercer infects Heller with the virus, turning Heller into his own personal prototype. If you want to cause chaos all over the red zone of New York, you will have to wait until April 24 and own a Playstation 3, Xbox 360 or PC.