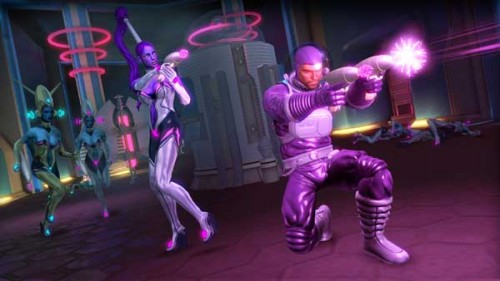 THQ have announced the release of the latest mission pack for Saints Row: The Third, this time taking the form of a sci-fi epic movie “Gangstas in Space”.

Critics in the game have raved about the movie, for example the official Steelport Magazine said: “Not suitable for children. Or adults.” Not to mention Stilwater Entertainmen’s comment: “I would rather do my taxes than watch this.” Why would you want to miss out?

In the latest pack, Hotshot director Andy Zhen has cast you as the star of the blockbuster movie as you are needed to defend your planet against scantily-clad aliens with laser beams and spaceships (which also have laserbeams). The pack will also include the usable alien spacecraft, the Aegian, as well as new alien gang customisation options, and new homies Kwilanna and Space Brutina.