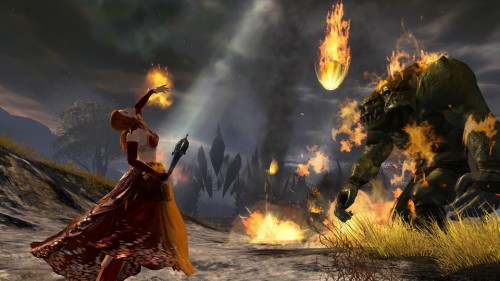 The latest Guild Wars 2 update comes from game designer Jon Peters. He provides some hefty knowledge about traits and attributes used in the game. Let’s dive into the juiciness of information.

Initially the developers where looking at a basic four attribute system which involved power, vitality, precision, and toughness. Seeing as this left players with only two offensive attributes – power and toughness, the design team sought out more offensive and supportive attributes to provide deeper gameplay. Here is what they came up with:

Additionally, individual profession attributes were created to provide yet another variable that could separate your character from the rest. For example, the ranger profession has the attribute empathy which enhances pet attributes. By finding equipment that has empathy or progressing through the appropriate “trait” line, your ranger’s pet attributes will increase.

Before discussing trait lines, the purpose of adding a trait system was to add more definition into building a character. As a player levels from 11-80, they will receive one trait point per level resulting with 70 points overall. Players will be able to invest points into five available trait lines for each profession. Check out the following trait line for the elementalist. 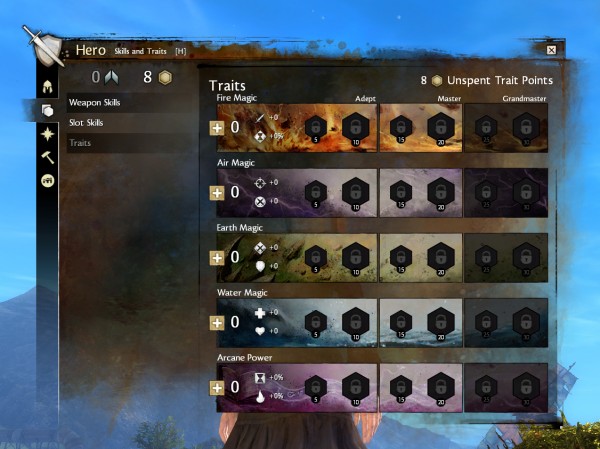 Players can spend a maximum of 30 trait points per line. As points are spent the associated attributes will increase. Therefore, spending points in the Arcane Power line would in turn increase the bonuses of concentration and intelligence. But here’s the catch! Spending points requires training manuals to increase the amount of points spent in a trait line. An adept training manual obtained at level 11 will only allow 10 points to be spent in a given trait line (at level 40: 20 points and at level 60: 30 points).

To obtain the rest of the information check out Jon’s post at the Guild Wars 2 Website. My mouth is salivating at the sight of all this player customization. The game’s pre-order slogan should be “Guild Wars 2 – It’s Acceptable to Drool”.