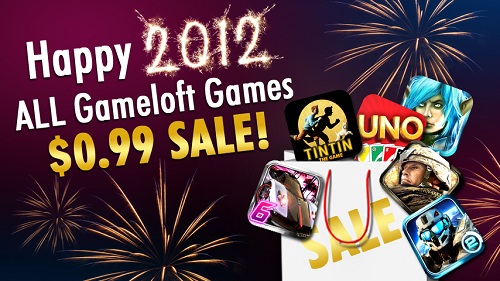 All around the world many people received new phones for Christmas or whichever holiday they celebrate and many of those phones may run using the Android service. Now what better way to get your new phone up and running than to pick up a few Apps from the app store, correct? Well what if you could do that, but for a whole lot cheaper than you ever thought possible? Well then we have some good news for you as Gameloft is holding a special 24 hour sale on their whole catalog of Android titles.

All the titles will be priced at $0.99 instead of their usual price. There are 22 games in total and the full list of them can be found on Gameloft’s website here. This includes “The Adventures of Tintin The Game” and “Modern Combat 3: Fallen Nation.” Now this sale isn’t just for people who just obtained their phones, it is available to everyone, even previous owners. Which of these apps are you willing to pick up during this sale?