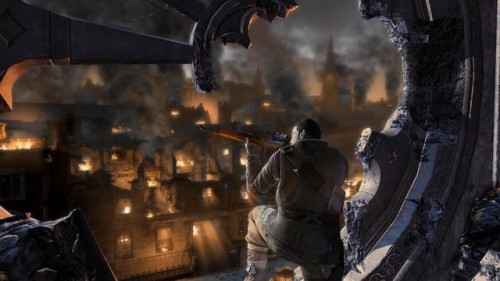 Over six years ago, Sniper Elite raised eyebrows by taking a war tactic and crafting an entire experience around it. We have seen a few decent clones since then, but fans of the classic can now rejoice as Rebellion and 505 Games have now announced a follow-up by the name of Sniper Elite V2, which will hit the Xbox 360 and PS3 in early 2012. Set in World War II, this pure sniping experience will place players in the middle of a war-torn Berlin amidst the frenzied final battle between German and Russian forces.

Got your attention yet? That’s only the start.

The revolutionary “bullet cam” introduced in Sniper Elite will also see a return, allowing your skilled shots to be rewarded with a slow-motion sequence of the bullet running its full trajectory from barrel to target as well as featuring graphic detail of the effects of the bullet entering and destroying a target.

• Sniping Simulation – Sniper Elite V2 features detailed sniping simulationwith advanced ballistics, taking into account gravity, wind, velocity, bullet penetration, aim stability and more. Guaranteed to provide players with the most realistic simulation of military sharpshooting yet available.
• X-Ray Kill Cam – Amazing “kill cam” technology showcaseswhat really happens when abullet entersan enemy’s body, allowing players to see hearts and lungs tear, livers burst, bones and teeth shatter and entrails fall out.
• Authenticity – The game features authentic World War II Berlin locations as well as vehicles, weapons such as the Springfield M1903, the Gewehr 43 and the Mosin-Nagant 1891/30and uniforms modeled after the original versions.
• Use The Environment – The slightest changes in the environment need to be taken into account to move into the perfect position, observe the quarry, take the shot and slip away unnoticed.
• Snipers Choice -Players will often find themselves facing a choice of the perfect shot that leaves them catastrophically exposed or a more difficult route that means they can continue their mission.

I recall my time spent with the original Sniper Elite quite well and as some of you might know, the raw skill needed to succeed is what lead the game to becoming an instant cult classic. At the moment, details on this sequel’s multiplayer are scarce, but based on the screenshots (which you can view below) as well as the little fact sheet above, Sniper Elite V2 is looking to start 2012 off with a bang.