Fantasy platformer-puzzler Trine first debuted back in 2009, and although the sequel has gone through a bit of a delay in it’s release, Frozenbyte have finally let fans get a hands on with the game. Pre ordering Trine 2 on Steam will give players instant access to two full levels to play in both solo and online multiplayer, and although it’s only a small taste of what’s to come, it’s a very satisfying one.

The three characters from the original Trine return, bringing a very well balanced game to life with Zoya the thief, Pontius the knight, and Amadeus the wizard. All have their own character quirks, with the rotund knight obsessed with his dinner, Zoya challenging the narrator when he calls her a thief, and Amadeus worrying about what his wife will say when she discovers he’s gone!The opening sequence has the heroes brought together once more by the mystical artifact that is the Trine, and although the story doesn’t have the time to develop, the characters are more than enough to draw you into the world. 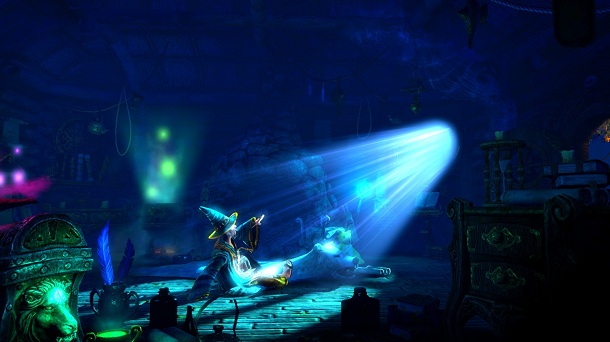 In a game like this usually one character is favoured over the others by personal preference and/or usefulness, but Frozenbyte have managed to balance the importance of all three with well thought out skill sets and levels.Whilst the characters do match up to their obvious roles (Pontius can smash anything to bits, Zoya is the most agile, Amadeus is the puzzle solver), developing their skills and making creative use of them opens up puzzles to multiple solutions. Whether its using Pontius shield to redirect the fire of an enemy or Amadeus’ boxes to provide cover, there are plenty of ways to utilise every character out with their stereotypical roles.

Collecting vials will eventually allow you to buy a new skill for any of the three, which can lead to an even greater variety in the gameplay. Where once Zoya would be overwhelmed by multiple enemies she can now freeze them solid after slipping into stealth mode, Amadeus can overcome his physical limitations by conjuring multiple boxes and levitating enemies, and Pontius just gets ever more destruction happy with some serious upgrades to his hammer!

Pontius is the obvious choice for combat situations, but the other characters are by no means useless. Amadeus can use his boxes to provide cover and block ranged attacks, or fling enemies onto spike traps. Zoya can quickly get herself up onto higher vantage points to rain down arrows or give Amadeus a safe spot to use his magic.

Whether you play alone or in the online multiplayer, it’s all about team work and co-operation (although there is room for some friendly shoving into spike traps). Whatever your usual play style all three characters are fun to play, and the level design and skill trees ensure that no character is favoured over the others . The online multiplayer can be jumped into from a single player game, and having all three characters on screen simultaneously makes for a faster, more chaotic experience. Where a single player has to change between characters (which is seamless anyway) to tackle a more complex situation, three can quickly combine their skills, and often in unexpected ways!I had a bit of trouble finding a game, but other than that the whole process was simple and trouble free – and there’s always the option for local play. 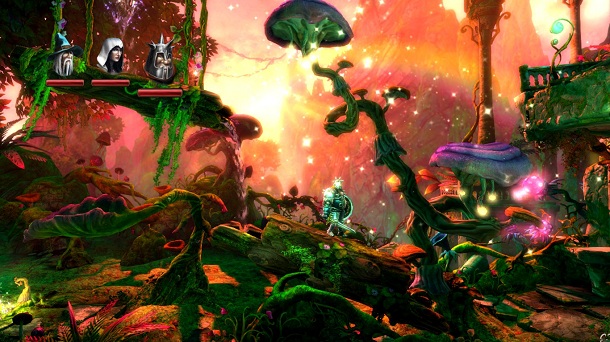 The game is absolutely gorgeous and the levels are packed with detail and vibrant colour – playing Trine 2 really is like playing through a fairytale. The lush forest areas are littered with plants, with vines creeping up trees and toadstools aplenty. In the background giant statues and mountains loom, and the dying sunlight is joined by a scattering of candlelight and the magical glow of some strange flora and fauna. It feels like a living fantasy world, and from the two levels on offer, it isn’t just pointless eye candy – the world is very dynamic.

How do you get rid of a giant snail blocking your path? Grow a giant lettuce for it to eat of course. A puzzle like this sees you tipping a log full of running water to flow in the right direction, and making creative use of Amadeus and his boxes to channel it over to the sparkling roots to bring the plant to life.

Elsewhere bouncy pumpkins can fling characters skyward to grab potions and health, vine tangled boulders swing back and forth and bubbles pop out the water to give you a lift upwards. In only two levels Frozenbyte show off an impressive amount of potential puzzle pieces that when combined in the full game should make for some tricky and imaginative puzzles. 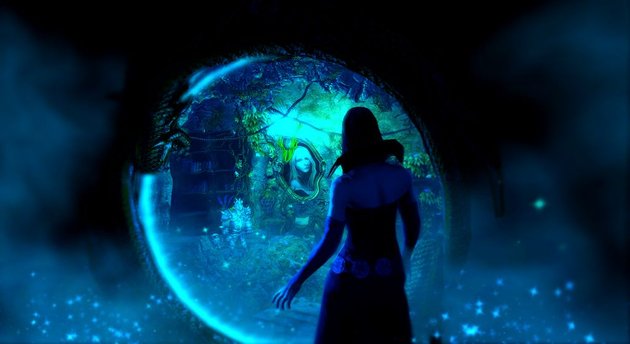 Frozenbyte have in a few hours of gameplay demonstrated a huge amount of potential in Trine 2. It looks incredible and the gameplay is a perfect balance between it’s three characters and the genres they represent. The fantasy feel is unashamedly fairytale, and Trine 2’s strong sense of style should hopefully develop even more when given a full game to play with. Although the story doesn’t get a chance to take off, there is an intriguing glimpse of a sorceress in the final moments that hints at some fantastic tale to come.

Trine 2 will be released in it’s entirety sometime this December on PC, Mac, PS3 and Xbox 360, so keep watching Capsule Computers for a full release date and review.