After recently acquiring an iPad I find myself the owner of an all Apple family consisting of an iPhone, iPad, iMac and Macbook. If Apple starts making appliances I’ll probably own those as well (though not until the reviews pan out, I’m not that insane). The only Microsoft product I own is an Xbox, I’m just waiting for Apple to team up with a console (I’m kidding, and also if they did it would probably be Nintendo).

With the iOS 5 and the iCloud integration system coming out, it looks like Apple is turning into a lifestyle instead of just some pieces of tech. And, in the perfect example, I have this Apple lifestyle. I wasn’t always like this though, I promise, in fact the Apple fever only started recently.

I was always a huge PC backer, I laughed at Apple people and their lack of games. I had experience with the big colourful boxes when I was a kid and I hated them and their whole way of doing things, I was firmly into my dislike of change at that point. Then Vista happened. A little while later (around four years ago now) I found myself needing a new computer because my old one had a virus (not from porn, at least I don’t think so) and to get XP on a new desktop meant I had to either settle for an old machine or pay more. As a Jewsian I not only want a cheaper product, but I want a fairly decent quality product, so both those options went against my life philosophies. Then the sales guy dragged my mother and I over to the pretty, pretty iMacs. They were relatively cheap, had far less processing power but they didn’t need as much so it kind of balanced out, inbuilt cam, no tower, and just so, so pretty.

I took my pretty iMac home and started playing with it. First off, I couldn’t find the internet browser and didn’t have the internet browser capable phone to Google what it was. But after overcoming that little hurdle I got to business. I hated the Mac version of MSN Messenger, but the rest of Microsoft Office was dealable, and then came the long love affair with Apple.

A year ago I signed up for an iPhone 3GS, then half a year ago I bought a Macbook (old but reliable and funnily enough more highly powered than my iMac), and so on.

But I don’t just like Apple cos it’s pretty. That wouldn’t be enough to make me stick around through the lack of decent games (although, thank God that is changing), it’s the integration and the way that it basically tries to make your life just that bit simpler.

For example, I wasn’t aware of this, but after buying my Macbook I saw that in Finder (file browser) I could connect to my iMac wirelessly. I didn’t need to install software, adjust network settings, or even go to effort to find it, my iMac was just calmly chilling out in the sidebar of Finder. 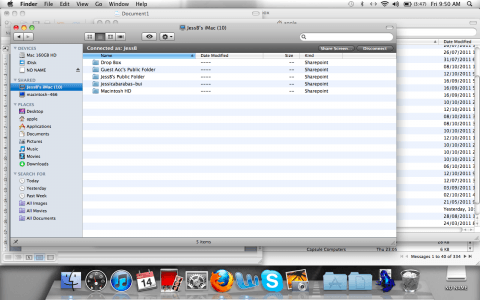 Not only can I transfer files back and forth over my network, but I can also share screens with it and control it remotely. Which has led to more than a few pranks on my part if anyone’s using the iMac at the same time. 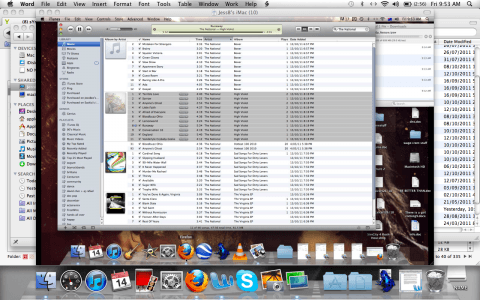 Then we come to the portable Apple products. These days there are apps that utilise two iPhones or iTouches as controllers and an iPad as the screen (off the top of my head, Fifa 12 and Scrabble). Basically this says to people that own an iPad without the smaller devices, ‘why?’.

There’s a reason Apple is going to take over the world if people let them, and it’s not because Apple is pretty or that they have superior tech (which I will be the very first to admit they don’t), but it’s because they push the boundaries and that the way they design their products is to fit with the rest of their products. So once you buy one, you tend to buy another and another, until pretty soon you’re like me.

Capcom iPhone Games on special for only .99c !!