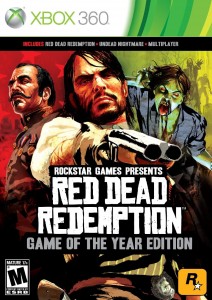 It’s time yet again to strap on the boots of John Marston as Rockstar have finally released the Game of the Year Edition of Red Dead Redemption. While some of the content such as Undead Nightmare should be obvious inclusions, Rockstar have actually took this release a step further by adding in all the pre-order bonuses as well as “Solomon’s Folly”, which was never put out on the XBLA.

“Red Dead Redemption allowed us to create a completely fresh and compelling take on the American West,” said Sam Houser, Founder of Rockstar Games. “We are excited for players to experience this vision in the definitive edition of the game.”

Here is a full list of what players can expect with this new edition of the 2010 favorite:

For just $49.99, this bundled package is definitely worth the dough and this is the only way to get all of the content offered without harming your wallet in the process. As of today you can now pick up this Game of the Year Edition for Red Dead wherever video games are sold.