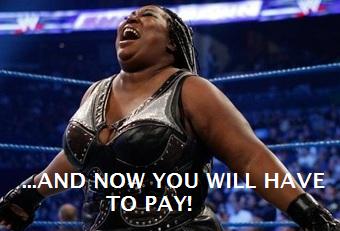 If you were planning on having Kharma or the Bella Twins rip apart the other WWE Diva’s in WWE ’12, you might have to grab some patience and a point card as THQ have now announced that certain current faces of the brand have been added in as DLC. Trish Stratus, Kharma, The Bella Twins, Vickie Guerrero and Alicia Fox will all be DLC only, and add to the already announced downloadables such as Mick Foley and Macho Man Randy Savage.

These downloadable personalities will be priced at $.99 (or 80 MS Points) for each, with players able to gain all the DLC by purchasing the Fax Axxess Pack for 11.99 (or 960 MS Points). Seeing Trish in a current WWE game is great and worth the extra buck, but I still wonder why such current faces such as the Bella Twins, Kharma, Alicia Fox wouldn’t be included by default. Nickel and diming aside though, WWE ’12 will finally lay the Smackdown on November 22nd and the “Diva Pack” will hit each online marketplace the coming month.