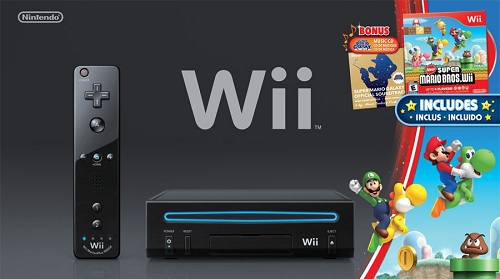 While Europe may be receiving a new color of the Wii which is a light blue version to go along with Mario & Sonic 2012 Olympic Games, North America is getting the same ol’ bundles we’ve always gotten. Except for one change, as Nintendo of America announced today that they will be releasing a new holiday bundle that includes a black Wii, black Wii Remote Plus and black Nunchuck as well as a copy of New Super Mario Bros. Wii as well as a special Super Mario Galaxy soundtrack CD.

This bundle which goes on sale on October 23rd will cost $150 and will not have any support for the Gamecube as you can see in the picture above, the Wii is a smaller horizontal unit. While this bundle is nice for those who need last minute gift ideas, the lack of any additional color option is quite detrimental.