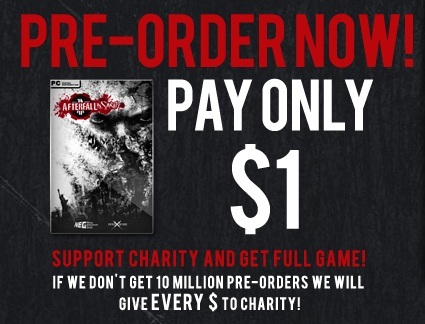 Remember that $1 deal for Afterfall: Insanity? Well anyone who chips in their buck to the preorder is now going to be supporting a good cause – all of those dollars will go to Amnesty International.

The original deal from Nicolas Games was that if ten million pre orders were reached for Afterfall: Insanity then $1 would be all that was due for the full game:

“Last week we started taking pre-orders for Afterfall: InSanity and have received absolutely amazing feedback on the campaign. We wanted to do something special with this game. By donating the proceeds from the Afterfall: InSanity $1 pre-order campaign to Amnesty International we can contribute to the defense of human rights and thus be part of something extraordinary.” said Tomasz Majka, the CEO of Nicolas Games.

If the ten million preorders are reached then 10% of the preorder proceeds will go to Amnesty International. Gamers need not fear for their dollar either, as if the pre-order target is not reached, that Amnesty donation will come off the full price, leaving the game at $33.90 for gamers who joined the preorder effort.

It’s a good deal folks, $1 for a game/off the full price,  $1 for Amnesty International. If you know you’re going to buy then head over to the game’s official site to support the campaign. Kudos to Nicolas Games – there are already 17,000 preorders.  If you need a little convincing then be sure to try out the demo, which will be released on November 15. Check out the video below for the indie developers rundown of the deal, and just think about how much good this could do.

Take a look at the entrancing environments of Afterfall: InSanity… then run away in terror