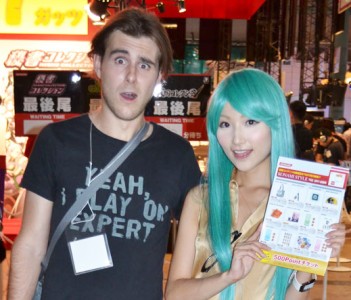 There were many high quality booth babes at Tokyo Game Show 2011, it’s been said that TGS was a little dead this year and last year was better. Booth babes make you forget about that, yes it’s been a hard year for Japan, but hopefully it’ll pick up again next year. I didn’t exactly take photos of all the girls, just the majority we liked, more specifically the ones that Benny liked! Ben makes a cameo appearance in all the photos, mainly because he’s mind was blown and you can see it by the look on he’s face. I think it sums up what being there is like, it’s ridiculous, and you get the feeling a lot of people go for just the booth babes.

Ben came to help us out for TGS on the business days and works as a graphic designer, thanks benny!

Hunted: The Demon’s Forge shows off its gameplay in latest trailer