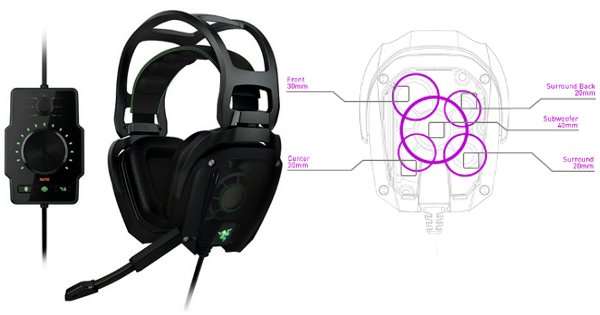 At Gamescom 2011, Razer announced the first true 7.1 surround sound headset. Featuring 10 —count ’em— drivers, this headset is sure to pack a wallop when it releases late this year for $180.

“The Razer Tiamat headset range is the pride of our audio engineering, the world’s first 10 driver headset, built to deliver the most powerful, clear and accurately produced positional audio gamers will ever need for the competitive edge,” said Robert “RazerGuy” Krakoff, President, Razer USA. “Surprise the enemy trying to creep up for a stealth kill, when you can hear their footsteps loud and clear behind you.”

Check out www.razerzone.com/tiamat-7-1 for details on the product. You can also check out the slightly cheaper Tiamat 2.2 headset —with 4 drivers— here.

Now if we could only get them wireless….

Steel Battalion: Heavy Armor trailer released; will use Kinect and Controller together next year