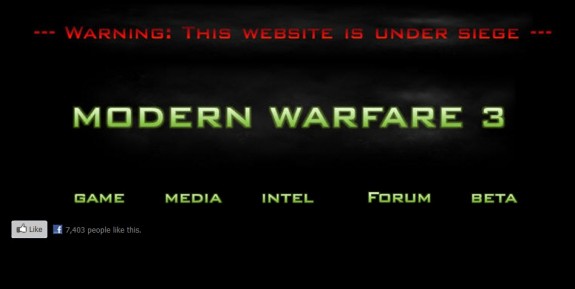 Seemingly had enough with the fools who registered the domain name ModernWarfare3.com, Activision have finally taken action and filed its first domain name dispute with the National Arbitration Forum. Why Activision didnt think ahead and secure every domain name under the sun that even relates to modern warfare is beyond me but anyway thats not the issue. ModernWarfare3.com emerged a while ago and before going offline had massed a large following and had nothing negative to say about the warfare franchise. But things changed and the tone of the site has turned derogatory and offensive with videos titled Modern Warfare sucks for all to see. The rest is just a whole lot of simple tongue in cheek jibes at the game and how Electronic Arts competititor franchise Battlefield 3 is the “new kid on the block”. EA have protected their IP from the get go registering the domain names Battlefield.com and.net as well as Battlefield3.com.

When the site came back online it was quickly noticed that the site owner was now redirecting traffic to EA’s official Battlefield.com site, and obviously Activision have decided that enough is enough. On July 15th they filed the complaint sparking ModerWarfare3.com to stop the redirection but boldly display the complaint letter on the homepage. The complaint cost Activision $2600 which i hope they get back should they be successful in obtaining the relevant domain names. Activision claim that the owner has no affiliation with the game and as such has no legitimate or legal reason to retain it. The company states ” It appears the respondent supports the game Battlefield……….EA is one of complainants principal competitors in the video game industry.

EA have denied any involvement whatsoever and have no connection with the person(s) who own the domain name or any of those redirecting traffic to their Battlefield site. Personally id say its some fanboys idea of a joke, nonetheless its pretty petty and childish and just goes to show some people really have nothing better to do with their time then put down others for a few minutes of fame. Heres to hoping common sense prevails and Activision are successful in retaining the domain names it should have procured in the games initial stages, otherwise im off to register ps4.com, xbox720.com and WiiU.com just for kicks.