During our tour of Capcom’s booth I was given the chance to play Resident Evil: Operation Raccoon City on a PlayStation 3 console. Resident Evil: Operation Raccoon City is an entirely different beast than what most Resident Evil fans may know. The title is being developed by Slant Six which has worked with the SOCOM series in the past, meaning that this title focuses heavily on squad based combat and also allows players to join up with team of up to four players to make their way through the campaign.

Unfortunately when we were given hands on time with the game, every other console was working individually, meaning we weren’t able to test out the co-op experience. Instead the better thing we were able to test, was the computer AI which replaces the human players and helps create a four man squad regardless of whether or not you have co-op partners. The allied AI seems to work rather well but they did not really seem to use their own special skills at all, instead they mostly were just handling the many zombies and B.O.W.s that would appear from time to time. Against the human opponents they held their own rather well, though I never received any notification if one of them was dropped in battle, they would just reappear instantly.

But before you can enter the fight, you have the chance to select a character of your own. Revealed at E3 were two new characters, Lupo and Four Eyes, two new female characters. This means that the game will have three female and three male characters, the three female being Lupo, Bertha and Four Eyes while the mail characters will be Vector, Spectre and Beltway. Each class has their own special abilities such as stealth or assault or explosives. For the sake of trying out the newest character I chose to play as Four Eyes, who is a scientist. One of her special abilities involves shooting a Bio Organic Weapon, such as a Hunter, and being able to control it and give it orders, making one of the enemies you used to shoot an ally. 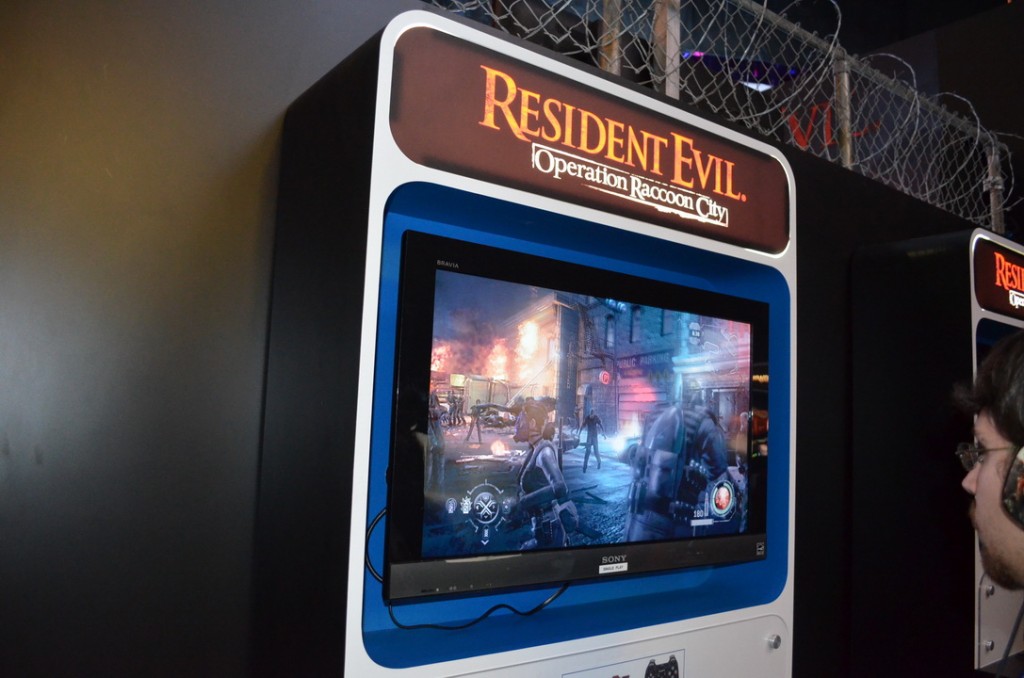 Besides selecting the character’s special abilities, I was able to customize which gun I wanted to use between assault rifles, SMGs, rifles and heavy machine guns. Of course you should put a good amount of thought into the firepower you will need because zombies are literally everywhere in the game and will constantly respawn and keep swarming the player until they advance where they need to go. When a zombie gets to close, I was able to use Four Eyes’ knife to quickly dispatch any of the lower zombies, even performing a “Brutal Kill” which involves a quick execution-like sequence with her knife. When a zombie did manage to get a hold of me, I was able to easily shake it off.

Of course if you don’t manage to shake them off in time, you can end up becoming infected which will eventually turn you into a zombie. I didn’t have this experience myself but the Capcom representative at the game station told me that your teammates will then have to kill you before you are able to respawn. Dying is something I did quite often through my demo time simply due to the fact that the game is extremely fast paced and there are zombies literally everywhere. When I was shot by another human survivor I was tasked to kill, it made my character begin to bleed which made all the zombies in the area focus solely on my character.

The fast paced experience may put off some hardcore Resident Evil fans but before you decide to put your money elsewhere, you should know that the fast paced combat, coupled with countless zombies and the high difficulty level means that the game will provide a true survival experience. Sure at the time of playing, death held no real consequence. But I am sure further down the line when the game is released early next year there will be some punishment for dying.