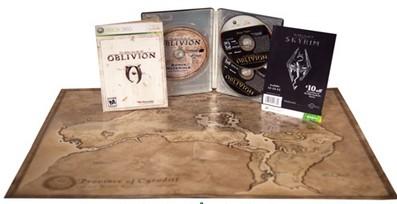 After a bit of a retailer leak revealed this news a couple of weeks ago, Bethesda officially stepped in to confirm the release of The Elder Scrolls IV: Oblivion 5th Anniversary Edition which will hit shelves July 12th for the PS3, Xbox 360, & PC. As expected, this edition will include everything a fan of Oblivion could want and will be encased in a stunning steelbook case.

Details of the 5th Anniversary Edition can be found below:

More details will soon be released of what the versions outside North America will contain. Looks fantastic at the moment though and for those who have yet to experience Oblivion, this is your chance as the 5th Anniversary Edition will be $29.99 when it is released next month.