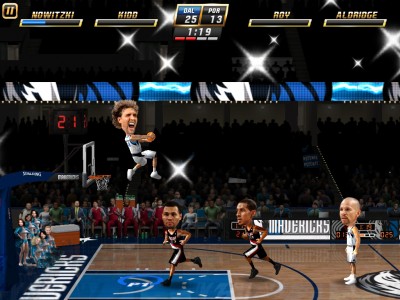 iOS and Android have proved to be valuable platforms for replaying classic games you can’t play without owning the original consoles.

The game has received a graphical facelift from the pixely look of the ’90s, but still maintains the playful visual style. The original voiceover announcer, Tim Kitzrow, returns with his classic lines, plus a few new ones.

Long-retired players of the actual NBA also return, including Scottie Pippin, Dennis Rodman, Dr. J, Scott Skiles, Karl Malone, Detlef Schrempf, and Danny Manning. None of these names ring any bells for me, but if they get you all nostalgically excited, then you’d probably want to snap this one up. In addition, the iOS version has some new players to unlock as well.

There are two control schemes, and three play modes to try out. The meat of the game will be the classic Campaign, where you play through a season, defeating all the other teams, and unlock players and cheats. As the game is on a portable system, there’s also a Play Now mode, where you simply select a team and jump straight into a match – perfect for smaller, bus-ride-length sessions. Or you can play against a friend, in local multiplayer via Wifi or Bluetooth.

Whether you remember the original in the arcades and home console ports of the mid-nineties, or are just looking for a solid basketball game for your iOS device, EA’s handling of an old Midway IP should satisfy. 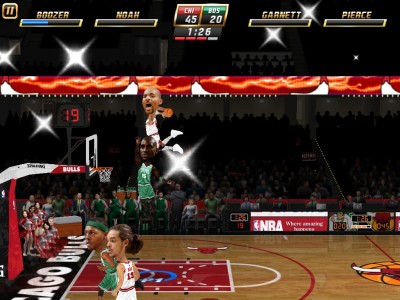