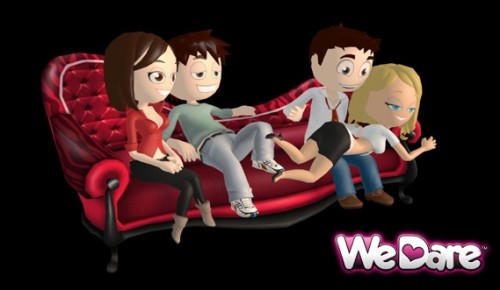 For all those who are missing out, Ubisoft recently announced an interesting game called ‘We Dare‘, for the Nintendo Wii that is spawning quite some controversy! Some are calling it the greatest idea for a game ever, while others see it as potentially one of the most awkward games of all time. It’s a game similar to wii sports, but is advertised as ‘quirky’ and ‘sexy’. While the many mini game’s content that play are basic standards for a wii motion party game such as flying through hoops and eating apples, the gameplay itself involves spanking, kissing wii remotes and of coarse, stripping! But here’s the catch: for some reason it has been banned in America! Europe and Australia will get the game though, as it has only been given a PG 12+ rating! Whatever side your opinions are on it however, there is no denying that the uproar, outrage and hilarious jokes on the internet arn’t a joy to read and watch, so here is a collection of some of my favorite quotes on the game that I’ve seen so far! If you have anything else to say, feel free to add it below in the comments section!

“The game where you shove wii motes in your pants. GAME OF THE YEAR PEOPLE. HANDS DOWN”– iProjectPixel, Youtube User

“For a 12 year old to play something like this, you’re taking away their innocence..When everyone starts joining in, then you’ll get the perverts playing.”– Caller on the daily UK talk show The Wright Stuff

“I’m really excited about it Jeff, It was really hard to convince girls to f**k me during wii bowling..”–Brian “Murph” Murphy from dorkly.com

“I think if this game existed when I was a kid, I think my dad would’ve bought me a copy to encourage me to find a girlfriend! It would not have worked, I would’ve found a cheat code of something.”-Jeff Rubin from collagehumor.com

“It is encouraging under-age sex. The video pretty much shows them swapping partners, girl-on-girl kissing. That kind of thing is not something that young teenagers should be exposed to.”–Concerned parent, Laura Pearson, from Birmingham (quoted from thedailymail.co.uk)

“It’s only like a modern day spin the bottle. It’s just a bit of harmless fun.”–Sandra Betts, who has a 15-year-old son (quoted from thedailymail.co.uk)

“Now weirdly it’s banned in America, Europe might be going the same way, but in Australia, they rate it a PG. Either their sex over there is crazy, yet they ban MK so I guess it’s the gore they don’t like, but they like seeing a bit of bum…”–JASONMOORE87, Youtube Blogger

“This is weird right, cause when I was a little kid, me and my uncle used to play this game all the time!”– Greg Miller, from IGN Entertainment

Oh yeah and there’s also countless parodies on youtube, and of coarse this awesome comic from games.on.net: 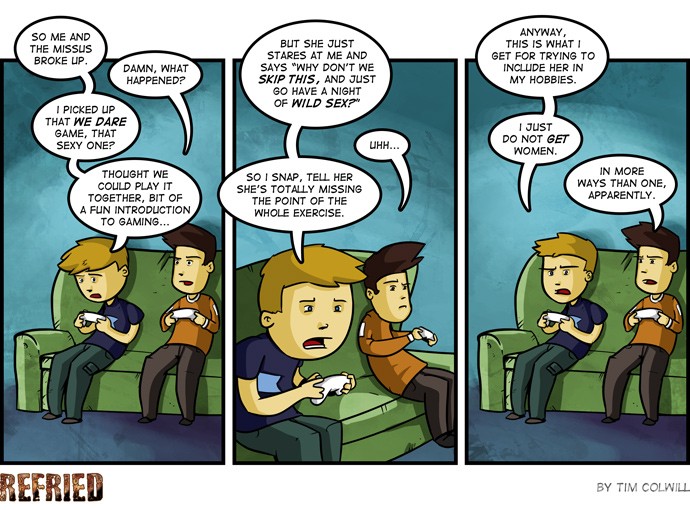 My personal favourite however was a simple pun on Ubisoft-“Ubihard’, as told on The Daily Mail. It should be noted that the majority of the controversy is not aimed at the games content, but rather at it’s rating: 12+. The game only implies sexual references at the most, so nothing sexual actually occurs within the game. While the game is banned in America, the game is still just PG here in Australia, while we have banned Mortal Kombat a few weeks ago. You can sign the Capsule Computers petition to include an R18+ rating for Australian gamers here. This has spawned a lot of controversy, and the future of the game will be interesting to say the least.

Personally, Im interested to see how it works out. This can either be the most awkward video game of all time, or a revolutionary title. Either way, kudos to Ubisoft on such an original concept for a video game. It really brings a new meaning to the term ‘co operative gameplay’, that’s for sure! 😛