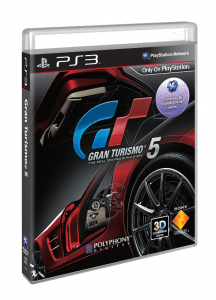 The PS3 has been around for four years now, and so far the only Gran Turismo game we’ve had was Gran Turismo 5 Prologue. Soon enough all your fears and anxieties will be put to rest, as now we have confirmation of three editions of the latest numbered game in the Gran Turismo series!

Check out the Press Release:

The world’s slickest driving game for PlayStation 3 to hit stores this November as a Standard Edition, a fully-loaded Collector’s Edition and a luxury, accessory-packed Signature Edition

SYDNEY, 5th August 2010 – Sony Computer Entertainment and Polyphony Digital have announced three different editions of the forthcoming Gran Turismo®5 for PlayStation®3 (PS3), offering racing fans more options than ever for immersing themselves in the drive of a lifetime. The eagerly-awaited game is scheduled to arrive this November – and here’s what to look out for on the starting grid.

More than a thousand cars, a global community of racers, the world’s most iconic racetracks and the drive of a lifetime – that’s Gran Turismo 5. Experience astounding realism, pulse-raising physics, high-speed thrills and a full tank of international motoring glamour as you race against friends at home or online against champions from around the world, and build yourself a stable of the finest cars ever to have graced the tarmac anywhere. One of the world’s best-selling driving games is back, packed with new features, new rides and new experiences that’ll take your life into the fast lane like never before.

A highly-desirable upgrade for serious racers and motoring fans, this eye-catching edition comes with plenty of added horsepower inside its high-end collector’s box. As well as the game itself, you’ll get:

Reminiscent of a no-expense-spared supercar launch, this luxury edition puts the pedal to the metal as soon as you open its contoured steel case – which is finished in Mercedes-Benz SLS AMG ‘Obsidian Black’. As well as the game, the ‘Apex’ driver’s magazine and the ChromeLine car pack, you’ll get:

Are you ready for the drive of your life?  The Gran Turismo 5 Standard Edition, Collectors Edition and Signature Edition for PS3 arrive this November:  visit www.gran-turismo.com or www.au.playstation.com for more information.

Excited? You better be. Only problem with this is WHICH version are you gonna go for come November? At least you got some time to think it over!