Who’s picked up the Apple IPAD yet ?  Seems like it sold over 300,000 units on its first day.  Not a bad little feat.  Well now if you’re one of those 300,000 people you’re gonna need games and EA have come to the PARTY !!  Check out the 5 super titles they’ve released for your gaming pleasure. 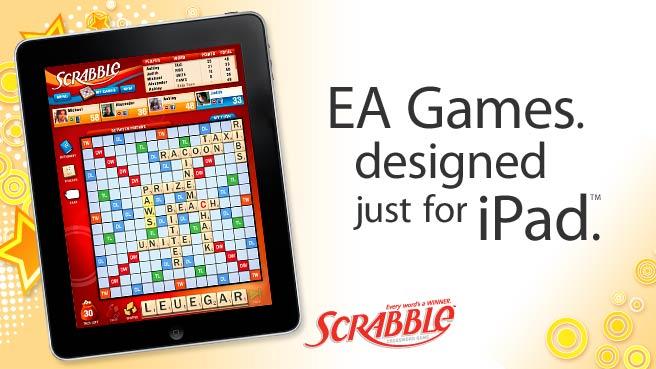 EA Mobile, a division of EA, today announced five best-selling titles available immediately for Apple’s iPad. These include SCRABBLE, under license from Hasbro in the U.S. and Canada only, Tetris, Need for Speed SHIFT, Mirror’s Edge, and Command & Conquer Red Alert.

“As one of the leading publishers on the App Store, EA is delivering five games today that take advantage of the unique capabilities of iPad for a broad range of gamers, from the casual to the hardcore, and today’s product slate is just the beginning,” said Travis Boatman, Vice President of Worldwide Studios, EA Mobile. “For example, with SCRABBLE, we have modernized this family favorite game by developing a fun, interactive ‘Party Play’ mode. For our more hardcore fans, Need for Speed SHIFT becomes the ultimate immersive driving experience. We are thrilled to offer EA games with the launch of iPad — a device that is like no other.”

SCRABBLE for iPad spells F-U-N! EA Mobile has created fans’ favorite crossword game, with a fresh interface uniquely designed for iPad that lets players pass ‘n’ play or go solo, in portrait or landscape mode. Social and multiplayer capabilities also enable players to challenge friends on Facebook, or through a local Wi-Fi network. In the all new “Party Play” mode, up to four iPhone or iPod touch players can connect their devices to be used as private tile racks and seamlessly play their words onto the iPad “game board” with a simple flick. And for newcomers, the exclusive “Teacher Feature” shows players the best word choice for the previous play.

Tetris, the Most Popular Mobile Game of All-time Now Available on iPad

Celebrating 25 years and more than 100 million paid downloads, the world famous Tetris game launches on iPad with all-new, high resolution graphics and exclusive features including highly anticipated D-Pad controls which give players the option to play the way they want and stay in control of the game. The iPad version also introduces an all-new “Endless” mode for the ultimate extension in game play. Tetris is a must have for any iPad user.

The award-winning leader in the racing genre, Need for Speed SHIFT races to the App Store with exclusive features, multiplayer capability, 18 unique tracks and a variety of race modes. Players can feel the adrenaline rush of an immersive experience when they choose from 28 of the fastest, hottest cars and enjoy physics-based 3D graphics optimized for iPad. New driving controls include the addition of visual accelerator and brake pedals, manual shifting, and a rearview mirror to see who’s coming from behind. The most visceral, aggressive simulation racing game on iPad will make hearts pound!

EA’s award-winning action adventure game, Mirror’s Edge, debuts on iPad with a graphically rich, addictive experience, and 14 nail-biting levels of unrivalled 3D action. Unique to iPad is a multiplayer feature which utilizes a split-screen interface, letting players battle against each other face to face in two thrilling modes. Exciting gameplay has players running on walls, sliding down ramps and leaping between rooftops as they out-maneuver enemies in pursuit of their mission.

In addition to these five titles designed specifically for iPad, gamers can access more than 40 EA titles already available on the App Store for iPhone and iPod touch. Any previously purchased iPhone or iPod touch game can run on iPad in its original size or can be expanded to fill the iPad screen. All games will be available in Europe with the worldwide launch of iPad later this month.