The Sinclair ZX Spectrum was released almost exactly thirty years ago as a home computer. Since then it has had thousands upon thousands of pieces of software created for use on the device, many of them games whose names bring back fond memories to those who had the good fortune of playing them at the time.

Well, they’re back! 100 Greatest Hits bundles one hundred games created for the ZX Spectrum and puts them all on iOS. Is this collection of games a bargain you should dive right into, or should the past have stayed in the past? 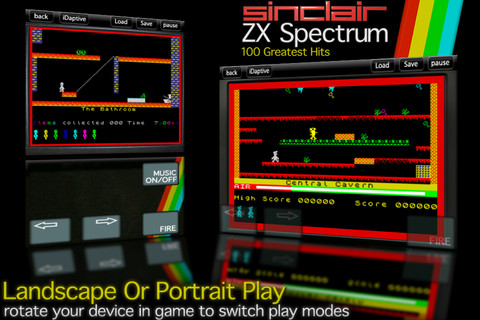 100 Greatest Hits has a hundred greatest hits… and so no, I did not get the chance to play through all of them for this review. I did, however, get into some of the classics, such as Barbarian, Jet Set Willy, and Manic Miner.  But here is a list of what you get when you download/purchase the 100 Greatest Hits :

Thankfully, there were quite a few attributes that were universal across the games. To begin with, we’re turning back the clock thirty years here, so the level design isn’t streamlined or console-ified. This is gameplay at its purest and most difficult. If you’re used to playing any game made in the last ten years, other than the rare exceptions like Dark Sous and The Witcher series, then be forewarned – you’ll not find the creature comforts of Call of Duty or Assassin’s Creed here.

However, if you were an avid gamer back in the day, or are one of those hipster-types who was born twenty years ago but plays retro games because it’s not mainstream, then prepare to enjoy a magnificent blast from the past. 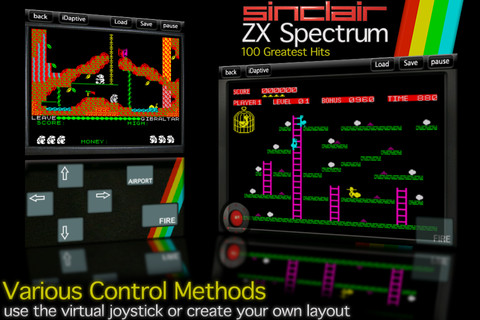 My one gripe is the controls, particularly on the iPhone, can be quite clunky. While you generally have the option of choosing between onscreen buttons or an onscreen joystick, both take up a rather large portion of the screen. Add in buttons for attacking and what-not, and you’ve got yourself a screen half covered by fingers while you try to manoeuevre through games that aren’t as forgiving as most. The controls on the  iPad version are a little more acceptable due to the larger screen resolution. (see image above)

So, essentially, if you’re play this on your iPhone you’re stuck either obscuring your vision and moving about quickly, or pulling your fingers away so you can see what’s going on, but your reaction time will be much slower. This is, of course, alleviated on the bigger iPad screen, but it is an issue on the iPhone that it does severely dampen the experience.

The sounds and graphics have not received any updates beyond being displayed on the HD screens of iOS devices. 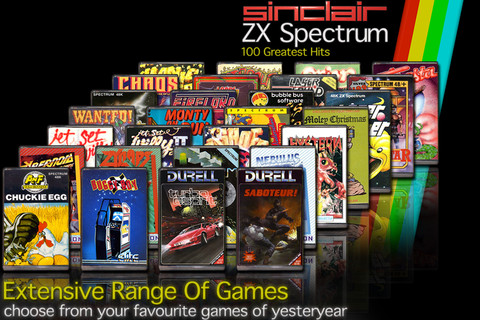 Much like the gameplay, what you get is pure, retro goodness. Eight-bit visuals greet you as you boot up a game and midi tunes blare in that obnoxious fashion that makes you glad that games have orchestral scores nowadays. The presentation will pull at every nostalgic heartstring in your body, and if retro games are your thing, you’ll be in a state of bliss.

The Sinclair ZX Spectrum 100 Greatest Hits is a blast from the past – quite literally. With the insane amount of classic titles available, anyone who was a fan of the system back in the day should definitely look into purchasing the app. And if you’re a new-generation gamer who just happens to love the old-school, there’s plenty of charm to be found amongst the hundred titles made available on the app.

The game is held back by its controls on the iPhone’s smaller screen, however, so if you have the option, go for the iPad version. And if you think retro means “too complicated”, you should probably look elsewhere.