Overview:
The iOS is still relatively new ground in the gaming industry, when compared to the industries history as a whole. There is a lot of developers creating some truly brilliant games for the platform and utilising the iOS to it’s upmost potential. However, on the other side of the coin, there are those who are doing the polar opposite. Zorro: Shadow of Vengeance is a game that blurs that line. It tip-toes to the line that is for sure, however the final product is something that unfortunately only barely qualifies as a video game. 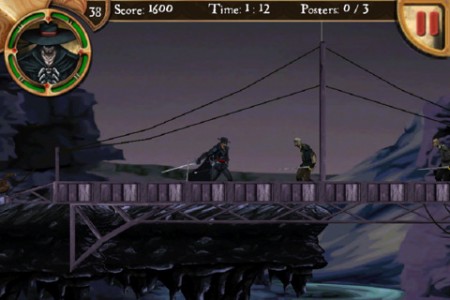 Gameplay:
There are game types that lend themselves to the iOS and yes Side-scrollers are often classified as one of those game types. Zorro: Shadow of Vengeance is a side-scrolling adventure game, atleast that’s what the package says. Though, take one look inside and what you find is something that’s existence is questionable. Why was this game made? What purpose does it serve? Before I answer those questions, I’ll explain the predicament Zorro: Shadow of Vengeance finds itself in.

The game utilises what is put simply a rather perculiar control system. It’s control concept is something not yet seen on the iOS. Atleast not in this grand a scale. However, this control concept is also Zorro’s greatest undoing. You shouldn’t aim for the stars when you can not reach the moon.

The developers aimed for a control system that would make Zorro: Shadow of Vengeance  a single touch side-scroller instead of utilising the standard on screen analog stick. They failed. What they instead ended up creating was a control scheme that is simultaneously unresponsive and impossible to master. There is no chance of understanding the glitches and managing to play this game through hard training. It simply is unplayable by nearly all standards. It is mostly a random foray of movements as you attempt to move throughout the game. Sometimes you try to run, instead you jump. Sometimes you try to jump, instead you dodge roll off a cliff into a field of cacti. It is simply a complete mess. 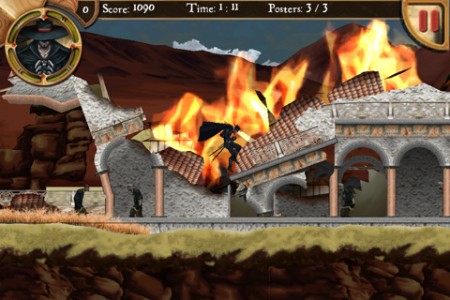 Whether you can believe it or not after reading that previous paragraph there was some potential here. The idea was interesting; a single touch side-scroller. However they swung and hit a foul of epic of proportions. Not only are the controls completely broken, if you so happen to manage to make it through a few levels of sheer luck (which I did after random swipings of my screen), there is a device crashing glitch to further rain on this game’s parade. I encountered this glitch 3 times over. Each time exactly the same, Zorro flips into a cactus, my iPhone crashes.

It is all really a shame, there were some interesting concepts here and the Zorro franchise was an inspired choice for a side-scroller. It’s just so very sad that this game can barely be classified as such. So sad that it barely functions. It’s just, such a waste of an idea and franchise that when combined had at first shown such promise. 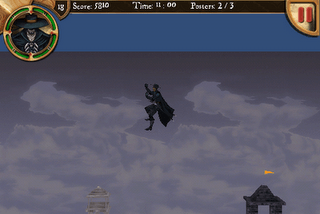 Graphically speaking, Zorro: Shadow of Vengenace is mediocre. There is much left to be desired from these visuals. I wish I could say that they atleast function, but there is often graphical glitches and tearing. Not only this but the model animation is poorly done and often glitches, sometimes crashing the game.

I had hoped the game would have atleast somewhat redeemed itself visually. That was far from the case as like it’s gameplay, it is a glitchy mess. It’s not at all eye-catching or visually pleasing and is sadly below the standard of the average iOS title. Overall the graphics are simply disappointing.

Audio:
Like the rest of the game, the audio is also glitchy. Tracks sound as though they are not properly overlayed onto the gameplay and at times mid-track completely cut off. Also poor was the games sound effects, which sounded simply attrocious and did not match the actions on screen which is a shame really.

I am just confused as to how so many things went wrong with this game. It’s one thing for the gameplay to be bad, but for both the visuals and audio to also be is just another disappointment added to the pile.

Conclusion:
To conclude, I must say that Zorro: Shadow of Vengeance could’ve been a decent game. Earlier on I posed some questions. Why was this game made? What purpose does it serve? I believe this game was an attempt from a small developer to create something fresh. Something different to the massive sea of iOS titles that are all similar in some way or another. They didn’t succeed, by any meaning of the word. This was an experiment, which not unlike that of a mad scientist in an 80’s cartoon, blew up in Pixofactor’s face.

More time was indeed needed during the debugging phase of this game. But in a grave mistep it seems that phase was almost entirely forgotten. The game fell apart and it’s glitching remains were scooped up placed onto the iTunes store and sold for $1.99 a pop. This game should stand in the iOS market as a guidepost for developers of what not to do when developing for the platform. Zorro: Shadow of Vengeance will never lurk in the shadows it will remain infamous as the game that both was yet never was.

I give Zorro: Shadow of Vengeance: