Welcome to Zombie Highway, the road to hell. Ride down the highway, maneuvering your vehicle to avoid zombies or knock them off your car. That’s not working? Shoot them with your upgraded weapons. Sounds too easy? Try avoiding the piles of abandoned cars in your path. Drive to the end without getting flipped over by zombies that fly to your car like magnets. Remember those safari monkeys attaching themselves to your car? Well, these are zombies and they’re nowhere near cute and furry. Drive safe! 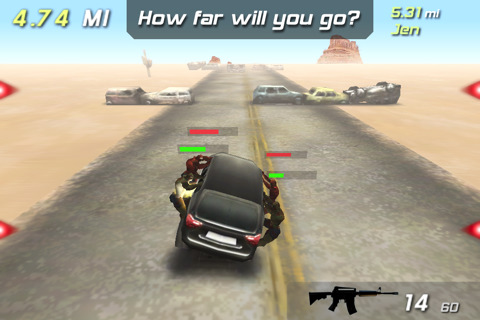 To start off, the sounds are ok, but they’re nothing special. You hear the car when it makes sharp turns and you hear the zombie jump on your car (kind of a thump) or fall of (splat), but it’s not one of those zombie games with the sound that chills you from the inside. If you’re looking for a not-so-scary zombie game, then this may be for you. Now, for the graphics. This game has very old graphic styling. The car and entire environment look like one of the 1990s games on PC. The weapon icon is the only object in the game that looks like it was designed in the 21st century. The graphics aren’t bad, but comparing to other games that are available in the App Store right now, especially zombie games, this one could use a lot of improvement. The health bars look pretty good and they flash when the zombies are more vulnerable after a hit and that’s really all you need to look good in the game. Although the graphics aren’t that great, it’s still a great game worth playing. 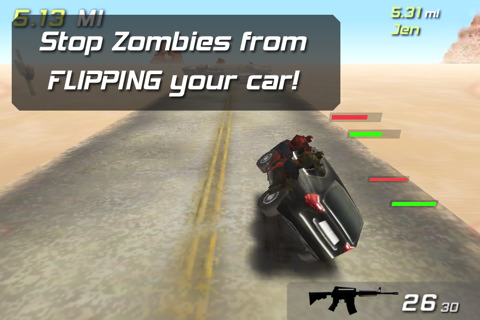 This is a fun game, no matter what it looks like. You’re riding down the highway when all of the sudden zombies start propelling themselves onto your car. You have to knock them or shoot them off before they flip you over. Different zombies have different amounts of stamina holding onto your vehicle. The better you do in the game, the more weapons you gain and by touching the weapons icon, you can choose which one you want to use to destroy the zombies. The only thing not so great about this game is there is no real replay value unless you try to beat the high score and it can get boring after doing the same thing over and over throughout the game. You’re driving on a highway, trying to avoid overturned and abandoned vehicles, as well as zombies. Make sure you don’t smash your car head-on or get flipped over by zombies or the game is over! This can get hard, but it’s a lot of fun. One cool feature of this game is that you and your friends can try to beat each other’s high score! The controls are simple, but can be a little unnoticeable. To drive, just tilt your iPhone or iPod Touch, but to shoot, you must tap the little firing buttons on the side that are parallel to the zombie. If the zombie is on the top right of your car, then you hit the top right firing button on the screen to shoot. This can get annoying when you have 4 zombies on your car, activating all the firing buttons and they’re too small to see them at times.  This really is only a problem if your iDevice is in a case. Once you master this, the game becomes a lot of fun. Just touch the weapons icon to choose your weapon and you’re ready to go. You can always switch weapons during the game. Choose whatever helps you from being flipped over! As an added tip for staying upright, the zombies are more vulnerable after they’ve been smashed. Shoot a zombie right after you smash them, while their health bar is still flashing, and you get more points and finish them off faster. There are zombies out there, so beware! 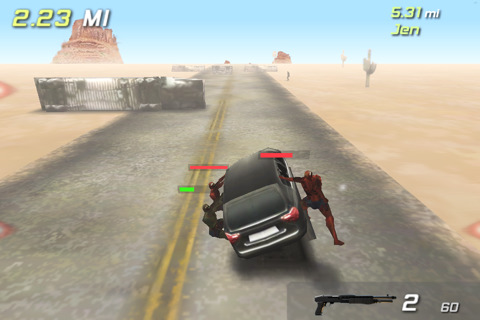 Zombie Highway has a great concept, but the graphics are lacking and the sound effects could be improved. The game is also just driving on and on with no changes to the game, besides new weapons and zombies. Otherwise, this is a great addition to the zombie game collection in the App Store. If you enjoy smashing zombies and racing games with obstacles, then this just may be the perfect game for you. This game deserves a GOOD rating of 7.5 capsules. If the graphics had more detail, the sound effects were improved and there were more surprises in the game, then this game would have received a much better rating, but for now it only gets a 7.5 until it gets these updates.