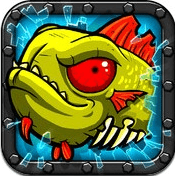 In the illustrious career of the zombie disease, zombie-ism has affected humans, dogs, crows, and now fish. Zombie Fish Tank stars a fish looking to predate his way up to the top of the food chain and seek revenge on the people that turned him undead.

Zombie Fish Tank’s basic premise is that our hero has been subject to many cruel experiments that eventually resulted in his zombification. Now, our yellow scaled friend is off to grow larger and larger while he seeks revenge on the humans. First, he must survive the insane creatures the lab has produced. The plot is a little light, but serves as a good enough reason why we should sate our zombie fish’s insatiable appetite. The game does have many witty little pieces of writing scattered through the game, which is a pleasure to read. Some of it is genuinely laugh out loud to read. 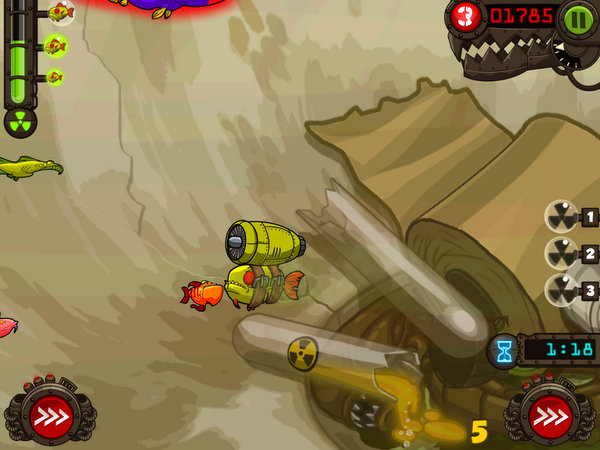 The core mechanic in Zombie Fish Tank is to eat smaller fish while avoiding larger fish. Getting eaten will result in game over. Once a certain amount of prey is devoured, the zombie fish grows in size and the hunter now becomes the hunted. After devouring a fish, there is a random chance that a can drops that contains power ups, debuffs, or radioactive material called Zomboil. Zomboil serves as in game currency. The game is composed of forty levels split into ten zones. Each zone composes of three normal levels and a boss fight. Each normal level has three optional tasks that need to be completed that add an extra level of difficulty to the game.

With in-game currency, players are able to buy a variety of limited use power ups, new in-game power ups, and a variety of fish that can be placed into a fish tank to provide a stat boost for the player.  Eight fish can be placed in the tank at any time, but there are 81 different fish to purchase. Many of these are either more potent versions of previous fish or have the same stats as other fish, allowing players some leeway to pick the best looking fish while still able to stack certain stats. 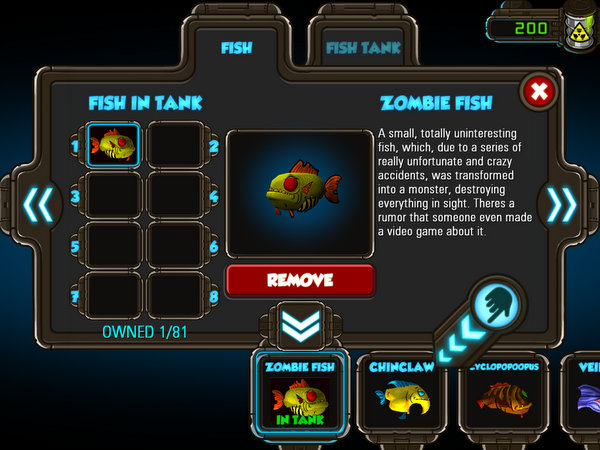 I thoroughly enjoyed the gameplay of Zombie Fish Tank. The boss fights were an interesting change of pace, and some were downright difficult. The prey/predator mechanic is a lot of fun. However, Zombie Fish Tank is one of the few games where the motion controls are by far superior to the touch controls. The gyro controls can be re-centred at any time with a quick double tap of the screen. The motion controls were very responsive and accurate. On the other hand, the touch controls were extremely clumsy. Using the touch controls required very fine movements to control the zombie fish. Even then, half the time I felt I wasn’t really controlling the zombie fish so much as I was encouraging him in a certain direction and eventually he would eventually fling himself that way. 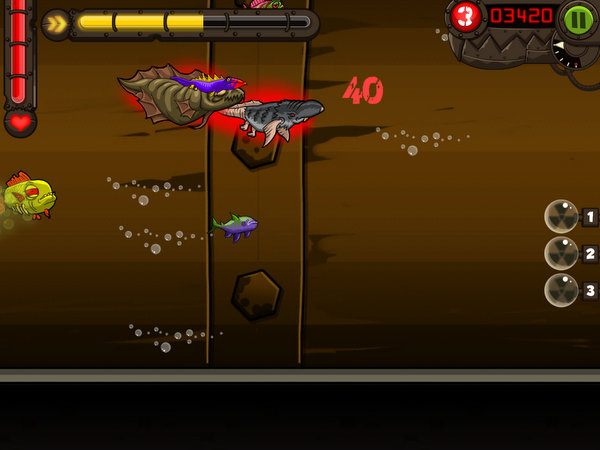 Zombie Fish Tank is a done in a slick 2d animated style. There is a large assortment of mutated fish, ranging from monstrously cute to completely strange looking, that help provide a nice visual variety to the game. The backgrounds manage to be full of life without being distracting to the gameplay. The in game UI is well designed, but I found the menus to be visually busy. This gave a cluttered feel to the menu that I do not like.

The audio in Zombie Fish Tank is rather average. The music is a little on the generic side, but is pleasant enough to listen to. The sound effects are a little lacking; there is only a small handful of chomping sound effects. I would have preferred to see more variety in the chomping noise as it is such an important mechanic of the game. Players won’t be missing much by playing with the sound off. 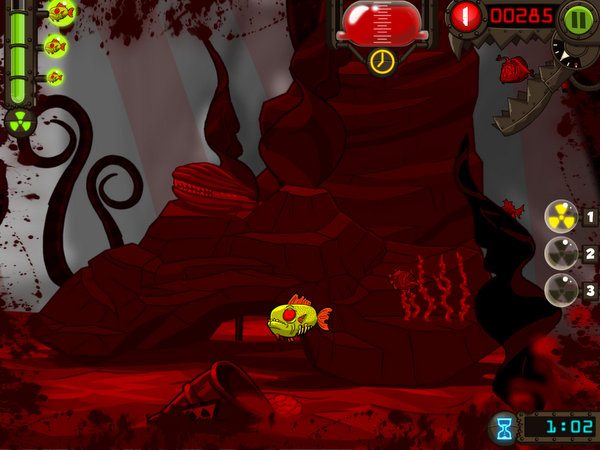 Zombie Fish Tank is a good game. It combines snappy writing with a fun predator/prey mechanic. The visuals are excellent, but the audio side is a little lacking. The touch controls could be improved, but it is thankfully eclipsed by the fantastic gyroscope controls. For $0.99, you really can’t go wrong with Zombie Fish Tank.