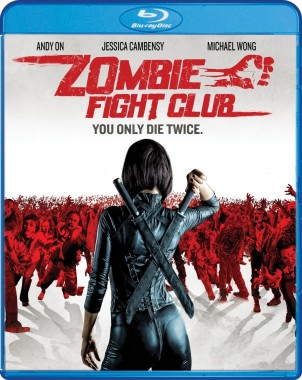 Overview
Eastern cinema is a lot different than what we have in the west. For one, the movies are more honest with the audience. Instead of having a politically correct product that reeks of product placement and advertising, filmmakers can deliver an untouched vision in locations such as China and Japan, which has lead to many fans importing their entertainment. Don’t get me wrong, there are still crappy movies in every locale, but there is something a bit more “raw” when you watch an import/foreign film compared to one of today’s terrible remakes that Hollywood keeps throwing at us. Zombie Fight Club is Scream Factory‘s latest Blu-ray and is trying to be a fun, action-packed, popcorn flick that all fans of the genre can enjoy. Does it hit its marks, or fall flat on its face? Let’s find out. 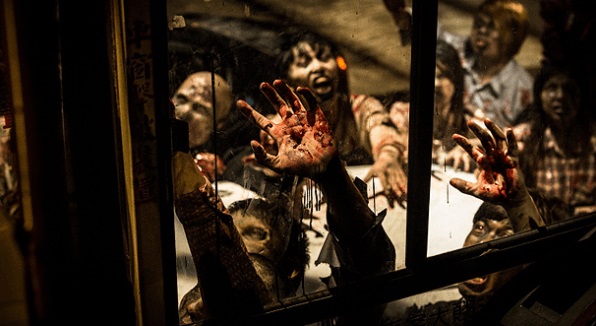 Story
I remember looking at the press release for Zombie Fight Club a couple of months back when Scream Factory first made the announcement. That press release and nearly every synopsis online details a film about two characters who are forced to fight zombies to the death (a male and a female). Well, you get that, but only for about ten minutes. Its hard to explain how off route the film actually is from that description, as while the ride is fun, this vehicle likes to go in circles and smash into plot holes for no reason.

Let’s start from the top. Zombie Fight Club for the most part takes place in a filthy, run-down apartment building where a lot seems to be going on behind each door. In one room, you have a drug lord who is celebrating a special occasion with a room full of women. A few pills are popped by the ladies while a nice little sex scene takes place, and then transformations occur – turning the once lovely females into flesh-eating zombies. Yes, these are normal zombies that can be killed by shooting in the head and can spread the virus with a bite – but they are a little more aware of what (or who) is in front of them, making them slightly smarter. Anyway, in another room, a criminal and his girlfriend have a hostage tied up. You would think this would be a subplot of sorts, but the movie really doesn’t go into detail about that situation and instead uses that set-up to really tell us that these two are corrupt, but still have hearts due to their loving nature to each other. Yet another room sees a college professor, his daughter, and several of her friends together – while a big party occurs just a short distance away.

Confused yet? Well, that is kind of how Zombie Fight Club sets itself up. Think of Smokin’ Aces or Crash even, where several groups of characters are brought together by one plot device. That device here are the zombies taking over the building, and the police (who were already on the scene due to a drug bust) kind of end up in the middle of it all. The first hour of this movie is actually fun, despite going at a rapid pace and being littered with characters who are easy to hate. There are cheesey explosions, decent gore, and a lot of cheeky humor that most people looking for a zombie flick are going to love. That said, its time to talk about what isn’t good in Zombie Fight Club, and that is the characters. Jenny (one of the random girls who later takes center stage) and Andy (the only police officer who is actually a good guy) are our main protagonists through the outbreak of terror happen to meet up, but are so paper thin that by the time it matters for us to care about them, you will probably be checked out entirely from the whole film. 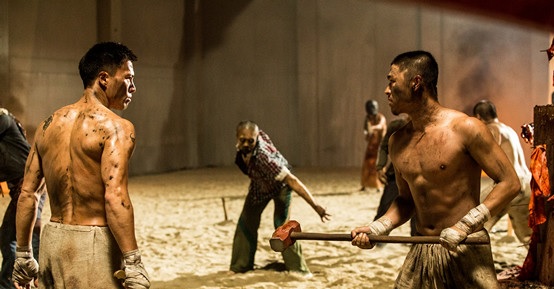 This movie spends more time trying to get us to know two cops who rape young women, a secret pedophile, and the criminals who are all obvious fodder over the two genuine cast members of the experience that are supposed to be the good guys. I get it, when people do bad things in a horror film, watching them die is fun as it is “divine retribution”. That trope works wonders and still works here to a degree, but without leads that you can root for, there is no balance and we as the audience are left with a bunch of scenes of zombies killing bad people up until the third act of the film. Oh, and that third act. Remember the whole “fight club” element? That is where it takes place, and as I mentioned you will only see about ten minutes of a Andy and Jenny fighting zombies to the death. The other twenty minutes are dedicated to a savage character who is now evil due to the events that took place in the apartment building, and spends his time raping his prisoners, surrounded by sex slaves. I do not mind grit in movies. Zombie Fight Club however is so poorly written that it uses rape scenes to instantly gain disdain for the villains within the film, which unfortunately just makes scenes seem cheap and uncomfortable. This could have been a good “escape from the zombies” movie as it has the right ingredients, but it just uses too much of the wrong elements to make them all blend together into a mess.

Visuals
Visually, Zombie Fight Club looks great. The lighting for both settings in the movie are effective at bringing out the grit that one would expect from the genre. The characters also look the part, with the main cast slowly transforming throughout the flick into hardened and torn individuals. There are also a couple of small explosions that look very cheap, but to be honest, that fits right in during any zombie romp, and slightly releases some of the darker tones that the film inadvertently casts on itself. The zombies themselves look decent enough too, with make-up and contacts being all that really define a human from an undead, yet again bringing out a bit of cheese to lighten the mood.

Audio
The soundtrack for Zombie Fight Club isn’t very memorable, to be honest. Sure, there are the usual rock beats to kind of give viewers an urgent atmosphere, but other than that – this wasn’t really full of tunes that stuck or even clicked well for the film’s entirety. The dubbing was something I worried about greatly. A lot of times when you bring a live action movie to the west and dub it, it turns out terrible. I honestly thought the dubbing cast did fantastic here as they sounded invested in the localization and came off as believable for this set of characters.

Overall
Zombie Fight Club is a bit of a hit and miss, and will be that way with anybody depending their own perception. I personally thought the first hour was a lot of fun to watch, as the scenes are well shot and there definitely is a throwback to some cinema classics laced within the apartment building. That being said, the scenes that are the most memorable are so for the wrong reasons and drag down a lot of the film’s efforts by taking something fun and turning it dark without substance or a general reason why. With offbeat pacing, unnecessary smut, and a bit of entertainment on the surface – Zombie Fight Club is a watchable and well made production that takes itself down a wrong road that kills it’s own momentum before coming to a climax.