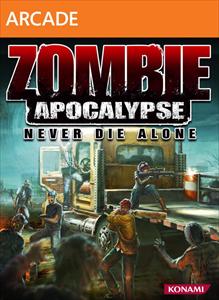 Overview
Whether gamers like it or not, zombie games are always going to bombard them. Since there are a vast majority of games that include zombies, developers want their game to stand out amongst the crowd. Zombie Apocalypse: Never Die Alone has its shining moments but suffocates the triumphs with crude humor and mediocre gameplay.

Story
On a secluded Canadian island, a rag-tag group of mismatched personalities join forces to gun down a zombie epidemic. The group consists of Jeremy – the obnoxious gamer, Alma – gun specialist, Father Bill – shotgun preacher, and Def Money – cricket playing rapper. With survival and “pwnage” on the mind, the four adventurers must find a way to escape the island.

Gameplay
I am off to the see the wizard – the wonderful wizard of Oz. Enough with the horseplay. Zombie Apocalypse: Never Die Alone states the basic truth directly within its title’s name. “Never Die Alone” should refer to never playing alone. This sequel was meant to be played online or locally in multiplayer. Playing the game alone will result in you dying very much alone.

The single player campaign requires the user to actively switch between four characters. Being difficult in its own right, this feat can be accomplished. Only by switching between characters can you raise their stats and create a well balanced group of zombie decapitation. Failure to switch will ensure a chapter repeat due to the mass hordes of zombies gnawing at your dead body. 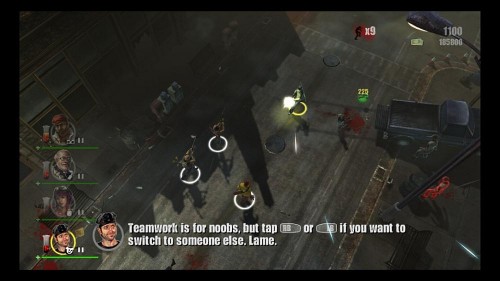 Utilizing the duel-stick format, gamers have the basic controls already figured out. Move with the left analog, and directional shoot with the right. Avoiding enemies is key to maintain health, and your finger should never be taken off the right analog. Since you do not run out of ammunition, fire at will.

With the basic controls out of the way, each player has special abilities they can muster. Each character is given a melee weapon to bludgeon a zombie to death. This method of killing is not recommended, but the continual thrashing could prove useful for character advancement. Chainsaw anyone? Additional to the melee character may perform a distraction technique. For example, Def Money’s distraction is a boombox that plays classic music from the 80’s. The soothing music stops most zombies in their tracks leaving them sitting ducks. Finally, all characters have an ultimate that can only be used once their ability meter is maxed. Father Bill’s ultimate heals teammates around him while destroying any minor undead that walks in his path. 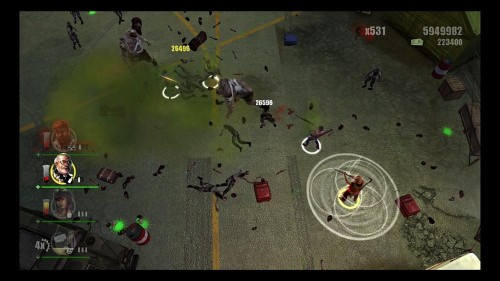 I find it particularly important to discuss the respawn after dying in a level. Oh wait, there is none. You must restart the entire level over in order to try to succeed. Sometimes I feel the game was saying to me, “better luck next time.” This always brings up the point of the reviving dying teammates. Similar to Castle Crashers, the amount of life regained is based upon accurate timing of heartbeats. Rapidly pressing the (A) button will bring teammates to life but with minimal health. 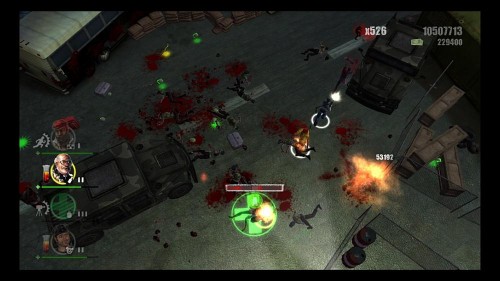 With dying being an issue, health packs are available during gameplay to replenish lost life. Upon investigation I noticed that multiplayer games dropped more health packs than the single player campaign. Disheartened after finding out this truth, I knew that Zombie Apocalypse: Never Die Alone was never intended to be played alone. The main menu screen lists the multiplayer option first!

Graphics/Audio
One major fault of the visuals is not being able to see complete characters. The game is set up strictly for multiplayer, and there is an enormous amount of traffic on screen. With all of this action going on, you can easily lose sight of your character and confuse yourself with another player. If you are playing with multiple players, a colored ring may help distinguish differences.

Explosions normally add to the intensity of the imminent environment. While the explosives may be intense, the effects have a wide range and blur the vision of the battlefield. With all of the action and special effects, the player may become lost in the gameplay and found drowning in a lake of fire. This also leads me to believe that Canadians are not practicing environmental safety regulations with highly explosive fuels scattered through their streets. 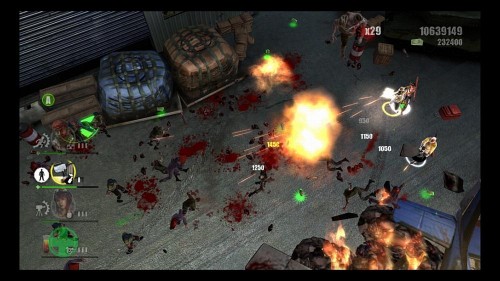 Settings and game objects mesh well with the governing story. One positive that can be discussed about the title is the consistent setting progression. With action shooters there seems to be a repetitive nature with the backgrounds, but Zombie Apocalypse: Never Die Alone takes the adventure to several places such as the streets, playground, airport, and even power plant. Some of the most interesting effects come from objects in the levels like the street sweeper and airplane propeller. 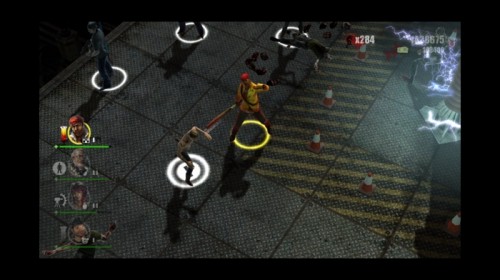 Keeping on the positive, sound effects are done exceptionally well. I could be trotting around bashing away hearing the sweet crack of the cricket bat to each zombie head. Additionally, players can swap their melee weapon during the level for a chainsaw. The appearance of the weapon is deadly, but the audio enhances the tearing of decayed flesh.

If I could explain the voice casting in one word, it would be ghastly. While developer’s try to encourage the crude humor and mature content, the end result provides a distasteful experience better left muted. The more chaotic characters – Jeremy and Def Money – appear to have British/Australian accents in which they swear constantly. Jeremy takes the voice acting abuse further by using “pwnage” and “trolling” in his sentences. Is it annoying? Yes, yes it is.

Overall
The “fun” factor truly relies on the developing community. If there is a community in which players can openly join another’s game quickly, Zombie Apocalypse: Never Die Alone will see plenty more action. However, the annoying antics provided by the main characters will drive you insane.

If you can ignore the snowballed effects of this top down shooter, you may find the storyline entertaining as well as amusing. Simply, this is one crude zombie game that will offer excitement as long as there are people to play with you. Can’t find anyone to play with you – enjoying dying.