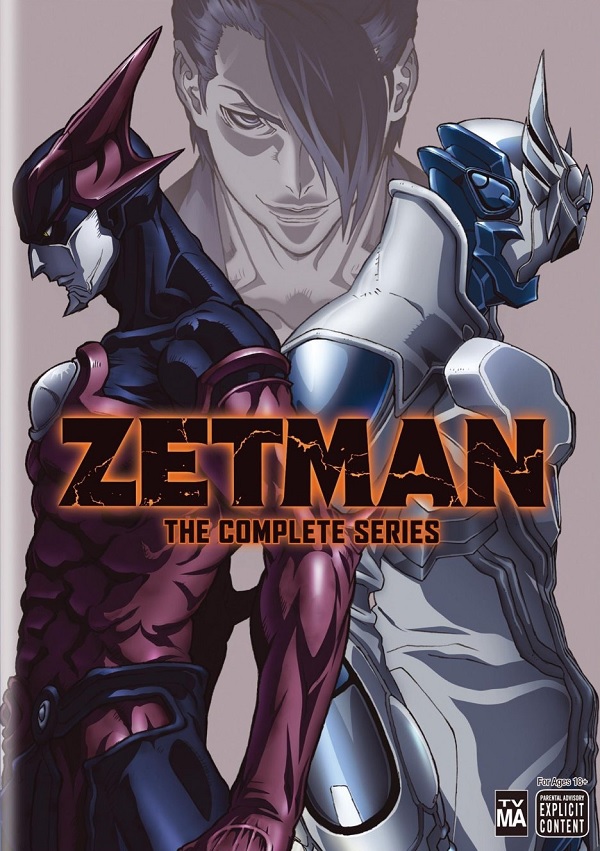 Overview
A number of the most popular anime series have been adaptations of manga series and while many of them are the result of the immense popularity of Weekly Shōnen Jump. There is a problem with adapting a manga to an anime however, the pacing. The Zetman manga has been running weekly since 2002 and featured 17 volumes by the time its anime adaptation was created. With such massive amount of material to try and cover and only thirteen episodes to work with, does Zetman manage to tell an impressive story with its limited length?

Story
Almost everyone has wanted to be a superhero at one time in their life. Whether it is to protect people close to them, save the innocent, defeat criminals, or simply have a superpower of some kind, superheroes are often shown as being true and just, with no faults. However the real world is far from simple and the minds of men with too much money and no moral compass can create nightmares. 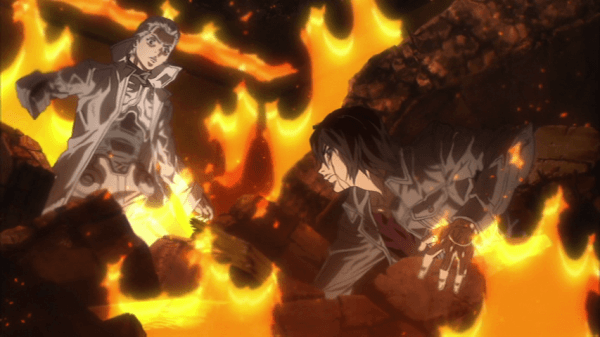 In a modern-day version of Japan with enhanced technology, an organization once manufactured human/animal hybrids called ‘Players’ to fight against one another in an underground arena where people of power could gamble away their money while the creatures tore each other apart. One day however, the Players manage to escape from their restraints and brutally slaughter every member in attendance and nearly the entirety of the staff that manufactured them.

Only a few people lived through this disaster, one of which happened to be the head scientist that manages to steal a child away from the organization. In an effort to give this child a normal life, the boy is raised as Jin Kanzaki, a normal human child except for raised circle on his left hand. Except for living the life of a homeless person, Jin protects those around him and helps those in trouble while also being friends with a rich brother and sister named Kouga and Konaha. 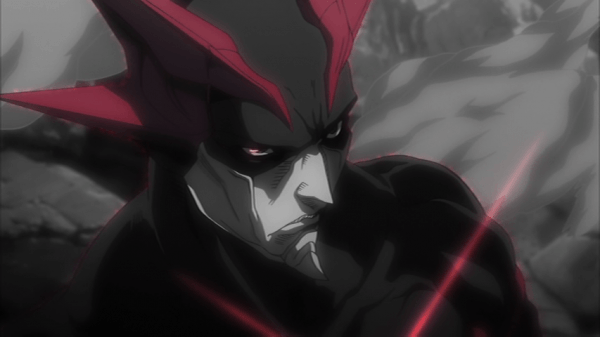 After disaster strikes and tears away the only person in Jin’s life, it is revealed that he possesses a great power that makes him the perfect weapon to defeat the Players, even if it means that he must leave the normal life of being a human behind. After numerous time skips, we find that although many Players are content with living amongst the humans, a rogue element has begun to organize, leaving Jin and Kouga, now gifted with a suit that grants him the power needed to fight the Players, to put an end to their plans.

Now, it is very obvious from the beginning that Zetman is rushing things as numerous developments come at the viewer at full-speed with little time to recover. Surprisingly though, despite the blistering pace that the story moves at and the numerous time-skips, the main story comes together in a hap-hazard way that  requires the viewer to pay full attention to the series or a crucial detail could easily slip past, since a number of small but important pieces of information are dropped so quickly that you can blink and miss them. 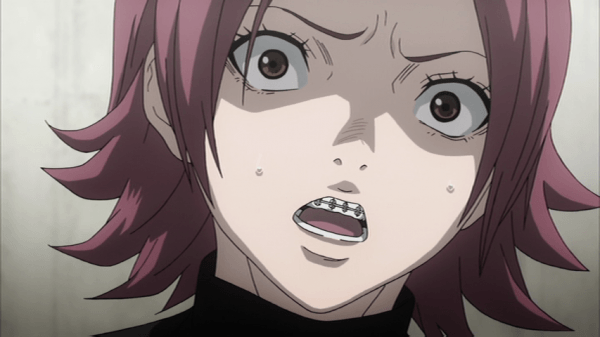 There is an issue as far as character development goes. While Jin and Kouga are given proper time to develop, as they are the key players in this story, all of the side-characters in the series are given little explanation or even fleshed out. There are numerous times that a character, often Hanako or Konaha, will act in a certain manner towards Jin that is simply out of place considering there has been no build up as to why they should act that way until later in the series.

Where the story really shines in Zetman is the contrast between Jin and Kouga and watching them learn what their own sense of justice is. Jin has always lived a hard life with everyone taken away from him and with his powers he may vow that no one close to him will ever be hurt again and he will go to any method to put a stop to those trying to harm people. On the other hand, we have Kouga, a rich boy who has idolized superheroes since a young age and wants to believe in justice above everything else. Where Jin’s hard life and connection to the Players drives his development, Kouga is tested and tried throughout the series as his sense of justice is called into question numerous times as he must make life and death decisions, where other lives are hanging in the balance. 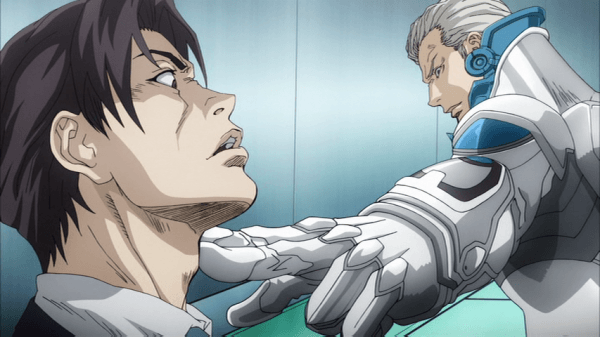 Thanks to some intense fights there is plenty of action to be had, but as mentioned before thanks to the rushed storyline, while it might come together partially, each development that occurs in Zetman feels like it has been cut and shortened simply to accommodate the short run time. That being said, Zetman: The Complete Series does manage to offer a solid ending, though viewers may feel like the ending is a bit too familiar to a certain western film that was released a few years ago at this point.

Visuals
While there are some issues with consistency during a few fight scenes, Zetman feature some rather incredible looking character designs and even better looking fight sequences. A lot of attention to detail has been given to the way that each character’s facial expressions and the monstrous Players that have to be defeated are quite a sight. 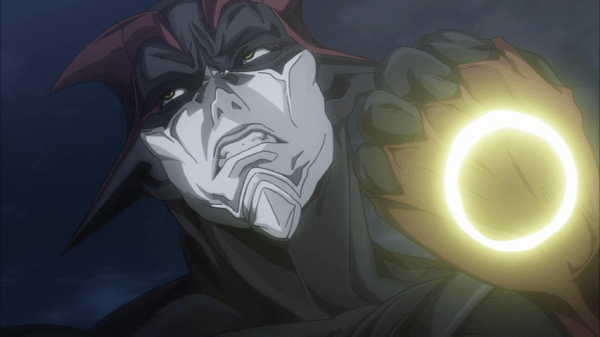 It is worth noting that Zetman is a rather bloody series and although the first episode does feature a minor bit of censorship, the series is uncensored meaning that there is plenty of blood being spilt here but nothing that really pushes the bar. There is also mild nudity but it mostly circumstantial and isn’t played off as a standard stereotype.

Audio
With Zetman, Viz has provided both the original Japanese voice track as well as their own English dub of the series. The original cast does a great job handling the characters but the English voice actors also pull the series together well enough that viewers could easily go either way on this series depending on the viewer’s preference. 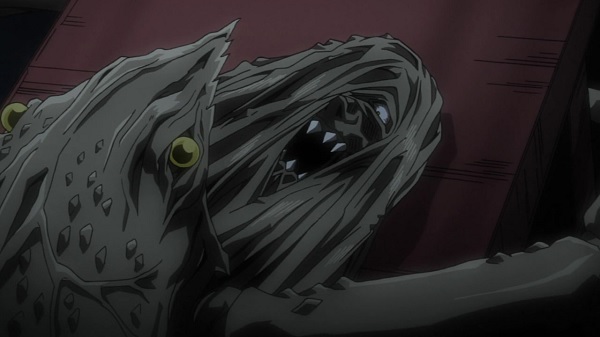 As far as the series’ soundtrack goes, the fight scenes feature some decent background music but most of the dramatic or dark moments are only given weight thanks to the animation techniques as the music is largely forgettable here. The opening theme for the series is “Dots and Lines” by You Hitoto featuring Mummy-D which works well with the series and is a great opener while “Tomeru,” also by You Hitoto, is a generic ending theme.

Extras
The bonus features for Zetman: The Complete Series are a bit sparse, with a clean opening and ending theme being the standard inclusions and a four and a half minute interview with the series creator Masakazu Katsura at New York Comic-Con padding out the bonus content. The interview is worth checking out as Masakazu mentions a few differences between the manga and the anime.

Overall
Zetman: The Complete Series is something that in the end, only feels like a complete series thanks to a decent enough ending on the final episode. It is clear throughout the series that there are pieces of the story cut away to fit into the episode limit and while Jin and Kouga are developed well enough to accompany the story, it doesn’t make up for the rushed pacing. There are still plenty of twists and turns to be had though and plenty of action in this dark super-hero series that takes a closer look at what it means to be a hero.