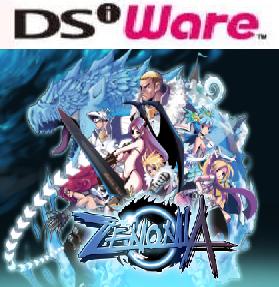 Developer Gamevil bring Zenonia to the DSiWare after the title’s huge success on the mobile market. Zenonia is a top-down action RPG with nearly 40 hours of gameplay and attempts to recreate the classic RPG as we know it. How did Zenonia fare? Here is my review.

Story
Zenonia starts off much like other RPG titles, with a nice long cutscene to get you acquainted with the characters and story. You then take control of a 17 year-old by the name of Regret, the game’s main protagonist who after his father’s demise, is looking for answers. There is a world full of supporting non-playable characters as well that really are all easily likable and make the world come alive with depth.

The overall story may sound a bit typical, but it is all intended. Zenonia feels like it knows that it is an RPG with a rather generic story, and that is the charm of it all. While the story stayed interesting the whole way through for me and there were many serious moments, Zenonia was also was full of pop culture and video game references bringing the somewhat aged setting into modern times and even cracking the fourth wall. The humor in the game is literally the icing on the cake and not only made Regret and all of the other characters within likable, but highly memorable. 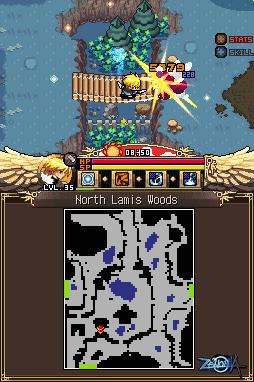 You start with three classes to choose from being Paladin, Warrior, or Assassin. Each class has it’s own strengths and weaknesses which effect the way you fare against certain enemies. On top of the different classes is the Good/Evil meter which measures your in-game decision making. Depending on choice, the storyline can shift and you can go down a different path which makes for more incentive later to go back through and try different choices and see how each story ends up when you are finished.

As well as the story mode there is always side-quests for Regret to complete for various characters within the game. Most of these consisted of fetch quests or simply beating a set number of enemies but the way these worked into the story actually helped me keep balanced within level for the next boss as you get experience for each enemy defeated.

Gameplay
Zenonia is an action RPG and it plays the part with near perfection. Control is simple to use with the standard D-Pad to move Regret and the “A” button for standard attacks. Other buttons are used for different techniques which can be learned as you level up. The menu system can be activated at anytime. The menu is simple to use and is great for on the go access to upgrading your stats, using items, or saving the game at any point. The bottom screen serves no real purpose except for the option to display your map and menu from time to time.

If you are not a fan of grinding, this game might annoy you a bit on that front as a lot of grinding is needed to get prepared for the many challenging enemies ahead on your main quest. Each enemy you defeat gives you experience and money which you can use to gain new techniques, better equipment, ect. The enemies are always different though and with the side-quest missions, grinding was actually fun in this title. Each enemy or encounter usually felt completely different than the next and if the challenge was too great, a simple strategy change worked wonders to get the job done. If your main character dies you have the choice of taking a hit to Regret’s stats and restarting the battle or you can simply give 3000 gold (or whatever gold you may have left if less than 3000) to jump right back in the game without having to restart at all.

Attacking is also easy and never a chore, but you must be lined up quite accurately to use attacks to their full potential. With practice I got better at this method but there was a slight hiccup from time to time with fighing multiple enemies at once as I felt gravitated towards an enemy that was closer rather than to the original target. Besides that one mishap, the gameplay engine is solid and extremely nostalgic and has a lot of the same qualities that made the older Zelda titles and classic rpgs of the past so great. 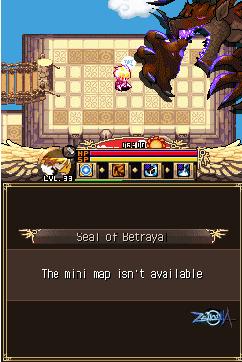 Graphics/Audio
The graphics in Zenonia looked a bit like a SNES title, but that is not a bad thing at all. Each sprite is detailed and the character model’s anime appearance worked well with fitting in to the overall world. As far as the land of Zenonia goes, each location is different and made me want to explore every crevice. I never once got bored of looking at the sheer beauty of the 16-bit locations once. To top off the graphics is a soundtrack that could easily be a contender for some of the best video game tunes in years. The combination of both really brought the whole game to life for me and kept me playing for hours on end.

Overall
Zenonia more than lived up to my expectations and then some for a DSiWare title. As I was playing through I felt like I was playing a cartridge as the game is so jammed pack full of content and hours and hours of gameplay that was simple yet addictive. The charming cast of characters and engaging story shatter any of the minor flaws in the game and set this title apart from your typical RPG to a fresh yet nostalgic experience. At only 800 points, this title not only puts out one of the best portable RPGs in recent years, but sets a bar for all future DSiWare titles which is a feat all to it’s own.