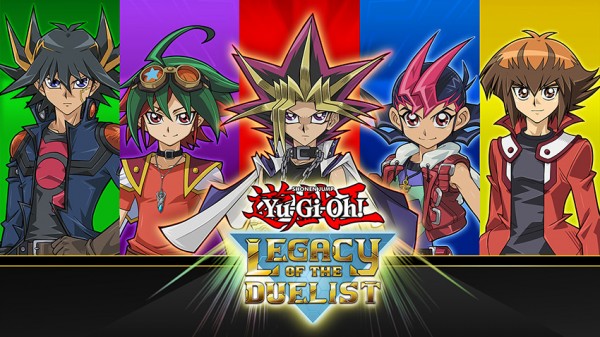 The Yu-Gi-Oh! name is known worldwide as one of the most famous Shonen Jump franchises and collectible card games of all times. With over 50 previous video game adaptations ranging from great to poor, Legacy of the Duelist is the first game being released for the eight generation consoles, promising a nostalgic story mode and the highest card count of any Yu-Gi-Oh! game ever with over 6600 cards. Is it time to get your game on or should this legacy remain lost to the Shadow Realm?

One of the main draw’s of Yu-Gi-Oh! Legacy of the Duelist is it’s story mode, which promises to go through each of the five main series of Yu-Gi-Oh! that have aired since the beginning and allow the player to reenact each major battle in the order they occur. This is a promise that Konami really delivers on with plenty of iconic battles to fight through, each one put in context with surprisingly detailed before and after story text, character portraits and backgrounds. Fans of the older series will enjoy the nostalgia and might even enjoy some of the newer story arcs they never experienced before. Each campaign (apart from Arc-V which currently only features one duel) is fairly long with lots of duels to play through against a huge variety of opponents. The first arc alone has over 25 duels to play in. 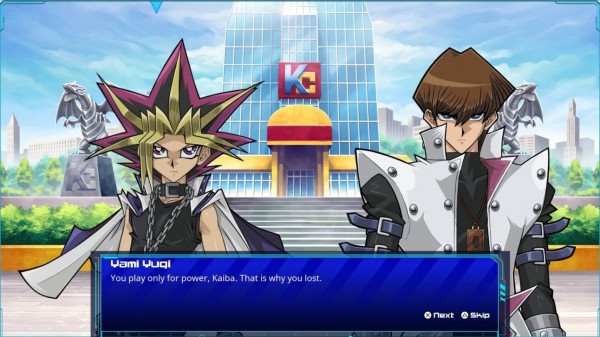 The way these battles are handled are impressive also. Most battles will have you assume the role of the main character of that series (E.g. Yugi, Jaiden, etc.) where you have the option to use the deck they were using at the time of that battle or your own constructed deck. In a great move, you can also reverse these duels once you beat them once so that you can play using the opponents deck against the other character. It’s a lot of fun playing with popular cards and trying to reenact the strategies seen on the show and it works very well here within the great dueling system.

As for the stories themselves they’re obviously not fantastic being based on a show about cards but some of the shows lore is interesting and the characters are generally pretty likeable from the shy Yugi who can transform into the strong willed Pharaoh Yami Yugi, to hot head Joey and so on. There’s normally something on the line and the progression of the stories are fast paced, but the main draw card here is just to reenact the show in an interactive way and the game does that very well. 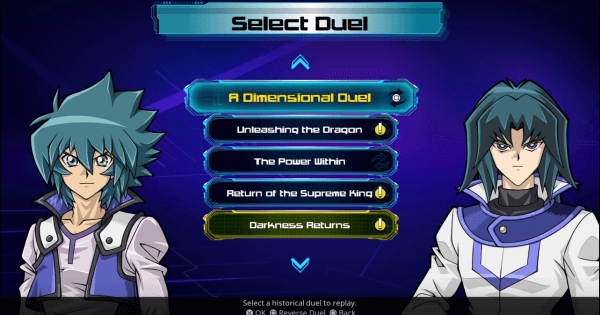 In a disappointing move, Konami has seen fit to offer 4 DLC packs at launch containing approximately 2 additional duels for each story arc (except Arc-V). Obviously cut from the main to game to sell off separately and make a quick dollar, the fact that buying all 4 packs will cost more than the full game and include marginally less content is absurd. These packs are clearly not worth it unless your a die hard fan of that particular series.

For a cheaper downloadable title this game has a great variety of game modes. Apart from the fun aforementioned campaign mode, there is challenge mode, battle pack mode, an online mode where you can battle against friends or randoms and of course the deck editor where you could spend hours searching through the impressive 6600+ card list trying to construct the perfect deck. 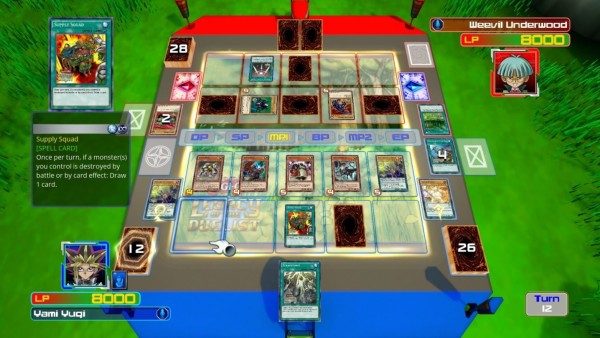 The gameplay here is straight up Yu-Gi-Oh! and as so the rules of one of the most popular card games in existence are in full effect here. This game adheres to the latest rule revisions which might catch some older fans by surprise. For example whoever goes first no longer draws a card on their first turn and now each player can have a field spell card on the field at the same time as opposed to when only one could be in effect at any one time.

For a lot of the old and new mechanics, the first battles in story mode are basically tutorials on how to play the game and use that series main gameplay addition (e.g. Arc-V’s Pendulum Summon or 5D’s Synchro Summons). There is also a dedicated tutorial mode should you ever wish to review any of the games rules which you might be grateful for if you haven’t played in a while, things have changed a lot since the days of Blue Eyes White Dragon being one of the games strongest cards. 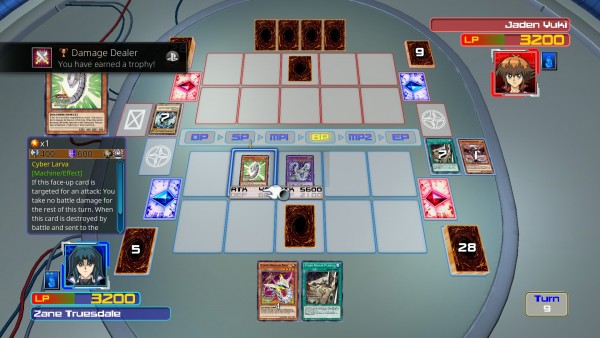 There is a reason this game has remained popular for so long and that’s because it’s fun and contains countless strategies you can employ to try and defeat your opponent. I’m no Yu-Gi-Oh! buff and am long out of the loop on what strategies are dominant, but the sheer possibility of creating new strategies with the amount of cards available is overwhelming. You can run a deck that will try to deck out your opponent, run a 40 card deck with lots of searching cards so you can get the ones to satisfy a certain victory condition, rely on equip cards, rely on fusion cards, run a theme deck, use field spells etc. The list could go on and on.

Familiarity with your deck and pulling off your chosen strategy consistently is the key to winning and also getting the most fun out of the game. Sure you might lose a few games because you continue drawing polymerization cards and cards that allow you to search your deck for polymerization cards, but at the end of the day the games are fairly balanced and it’s your decision on how to construct your deck and when to play those cards that will ultimately lead to consistent victories. 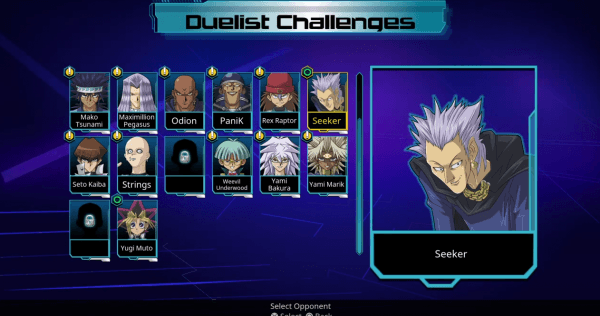 To test out your skills beyond the story mode, the game offers a Challenge Mode and a Battle Pack mode. Challenge Mode allows you to face the large cast of characters across all the Yu-Gi-Oh! series again, except this time with a MUCH tougher deck. Rex Raptor was a fairly simple challenge in the story mode but he came back with a vengeance and destroyed me in Challenge Mode. Defeating each character here will be a time consuming and challenging feat but the rewards are great and you definitely improve as a duelist as you complete the mode.

Battle Pack mode is another great addition, allowing you to enjoy the semi-recent trend of TCG drafting of real life in the game. There are two types of game mode on offer here, Sealed Play, where your deck is made automatically from 10 five card packs and Draft Play, where you draft 45 cards across 3 rounds of opening packs. These cost a low 2000 DP to participate in and if you win a best of five against an AI or online opponent you get to keep all the cards you used in your deck. This is a great mode for people who are just looking to play without the hassle of creating their own deck, not that the deck editor isn’t sufficient to allow someone to do this easily (although a sort by obtained filter might have been a handy feature to add. 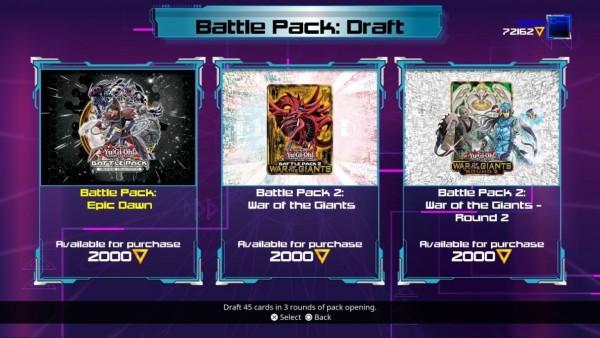 Online mode unfortunately is one of the weakest modes due to technical frustrations. Finding random opponents to play with, even during launch week has proved troublesome and connection errors are all too common as is lag between actions. Even when playing with a friend in the same suburb our match would lag and one of our duels was forced to come to a premature end as none of us were able to move due to one player being constantly stuck in the ‘thinking’ state (which happened again in another random duel). These issues are a big plague on the mode which is a shame considering playing with others is such a huge aspect of this franchise. A bigger issue for some will be the lack of a local multiplayer component, meaning online is the only way to play with friends.

The main visuals in this game are incredibly underwhelming with the only good looking assets of Legacy of the Duelists being the HD scans of each card (which even then are ruined by an obnoxious Legacy of the Duelist watermark imprinted on the art of each card) and the character art/background art during the campaign mode. Even for a cheaper downloadable title the graphics for the most part are just poor. 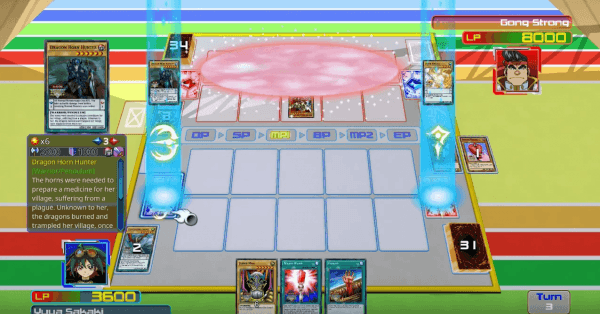 The story mode in the campaign at least is thankfully well delivered visually. Sure it’s a simple text and nature story mode similar to a lot of handheld games, but from my knowledge nearly all of the key moments of each series is represented here, sometimes aided by visuals such as the Millennium Items to help accommodate the script. For a game centered so largely around nostalgia it is nice to see some effort put in here, but it still seems like a missed opportunity to accommodate the great gameplay with visuals that would in some way recreate the show.

Everything else is about as bland as possible from the dueling fields to any special effects. Even the text and menus here look like they have been lifted from a PS1 game and that is sadly not an overstatement. Everything from the colours of the text and interface elements to the ugly special effects seen during Pendulum Summons and similar events just looks bland and borderline terrible. 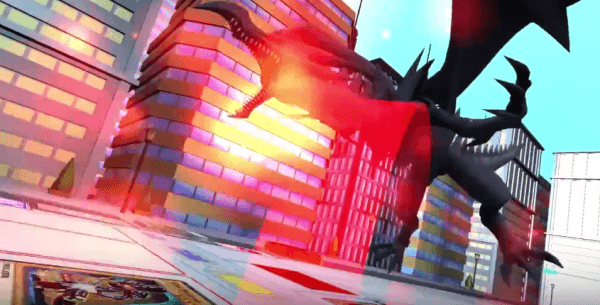 Don’t even bother getting excited about the “battle animations” that are exclusive to special monsters such as Blue Eyes White Dragon and Dark Magician. Not only are the models about on par with those found in a PS2 title, the animations and special effects are horrendous. As a huge fan of the Tag Force titles on the PSP, this is an enormous step down overall in quality. Making the matter worse is these can not be turned off, so have fun watching the exact same animation every time as you try to take out your opponents Scapegoat tokens. They are just horrible.

Like the visuals the audio here is about as bare bones as you can get. There are only a handful of songs that play during duels, none of which are particularly catchy or fit the mood of the duel well. This is especially true in campaign mode where you might be entering a Shadow Duel with your life at stake, and the music playing just gives off a care free vibe. Don’t expect any voice work in this game as there is none. As for the sound effects I remember hearing some of these noises back when I was playing Yu-Gi-Oh! on the Nintendo DS. They are serviceable but equally bland. 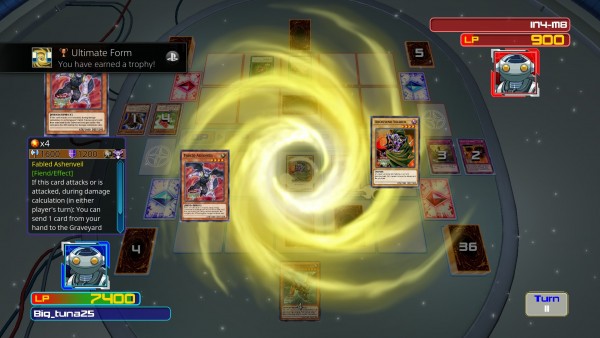 Beneath the borderline terrible visuals and forgettable audio is a fun strategic card game that can have you hooked for hours on end. The card game is as fun as ever with countless cards to collect and strategies to employ all adhering to the classic rules of the Yu-Gi-Oh! card game. A well done story mode will give you a reason to continue playing until you get good enough to take part in the great variety of other modes and online duels if you can put up with the lag and other common errors. While Legacy of the Duelist might not appeal to those who aren’t fans of the series, those that are will enjoy the story mode and the excellent card game that is the core of this title despite wanting more from the sub par presentation and troublesome online mode.