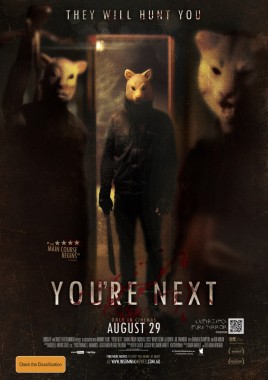 You’re Next is a black comedy/horror film by American director Adam Wingard, who had previously won awards from the Indianapolis International Film Festival and Boston Underground Film Festival for Pop Skull (2007) and from Fantastic Fest in Austin, Texas for A Horrible Way to Die (2010). The award-winning streak continued after You’re Next‘s world début at the 2011 Toronto International Film Festival ‘Midnight Madness’ program, when it won Best Picture, Best Director, Best Screenplay (Simon Barrett), and Best Actress (played by Sharni Vinson) at the 2011 Fantastic Fest (it took two years to receive a wide-theatrical release). These are very niche organisations however, so does You’re Next truly deserve its budding ‘cult-hit’ status?…

Screenwriter Simon Barrett keeps the “sex kills” rule developed in Friday the 13th alive as You’re Next begins with a couple having intercourse, before the woman is slaughtered. The man comes out of his shower to find her lying outside the living room’s sliding doors, with the words “You’re Next” written on the glass in her blood…and, of course, the killer immediately makes good on that promise. So, what do these two individuals have to do with the main cast? They were the lone neighbours of the Davisons, who would shortly arrive at their remote Missouri vacation house down the road. This is obviously no longer a safe neighbourhood…maybe the killer moved on? Wishful thinking… 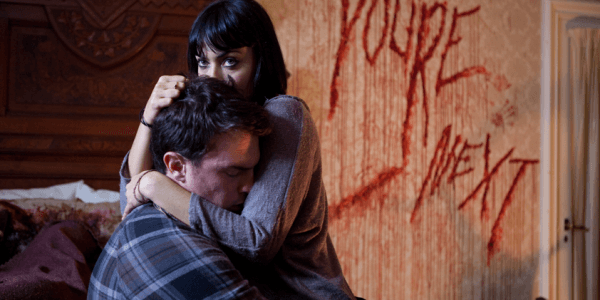 Parents Aubrey (Barbara Crampton) and Paul (Rob Moran) turn up first, only to find the door unlocked, which Paul too easily dismisses. Soon enough, however, Aubrey swears she is hearing footsteps upstairs. Paul tells her to wait outside the house as he goes to inspect the second floor for intruders. He is startled when his son Crispian (A.J. Bowen) all but sneaks up on him (why do that to the old man?!), asking why his mother is crying outside the front porch. Crispian’s Australian girlfriend Erin is comforting Aubrey outside. The next day, the rest of the siblings show: the antagonistic Drake Davison (Joe Swanberg) and his partner Kelly (Margaret Laney), the quieter Felix Davison (Nicholas Tucci) and his girlfriend Zee (Wendy Glenn), and finally Aimee Davison (Amy Seimetz) and her documentary-maker boyfriend Tariq (Ti West).

In the day, Erin is sent to “borrow” some sugar from the neighbours (you know which ones), and she finds no response as ‘Looking for the Magic’ by the Dwight Tilley Band plays on repeat, blasting from a CD player that was never turned off – at least the, now former, owners won’t have to worry about that electricity bill. At night, the family reunion feast is thrown into chaos as the brothers fall into a heated argument before all hell breaks loose and that stalking presence the audience has become privy to makes itself known to those at the dinner table. And what better way to make an entrance than to shoot an arrow through a window, and into the head of a hipster filmmaker. Tariq, we barely knew you…and neither did Aimee; they were only dating for a short period of time. 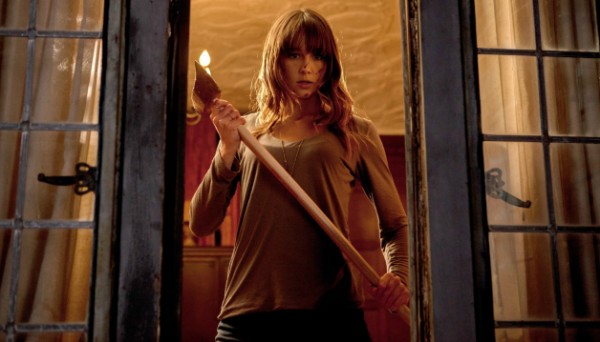 From here on, the group scramble to survive, with Erin filling the role of leader. All acquire weapons, lock the doors and windows, and talk strategy. There’s one particularly gruesome death which sees a certain sibling unknowingly slit their own throat on a strung up, taut piece of chicken wire. And the gore doesn’t stop there; it actually gets worse. There’s multiple stabbings and bashings, along with some more creative kills…this is definitely more on the gory end of the horror spectrum than flat out scary (I relate it to Evil Dead in some respects). And of course, there is humour in some of the more ludicrous occurrences; let’s just say that, if you need to stab someone five times before they die, than you’re not exactly fit to be a killer. And if you’re going to wear a mask (Lamb, Fox or Tiger!), make sure the eye slits have a good field of vision, and never underestimate the capability of a kitchen appliance to kill. Not on its own of course; this isn’t a possession film after all. 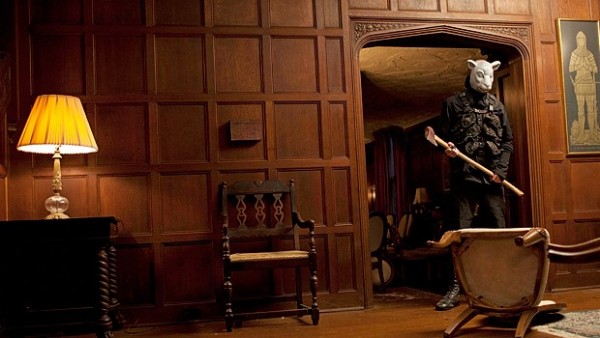 The film takes multiple turns over its course, with more than one twist to shock and surprise you. The reason given for Erin’s adeptness in survival tactics is definitely an original one, and it is nice that it actually ties in with her specific background and nationality. Nonetheless, that switch flips quite quickly, with not only her ability to take charge coming to the fore, but her entire behaviour and attitude undergoing a sharp transformation. The early ambiguity related to the number of assailants was effective for me as I had not seen the above poster featuring all three masked murderers (I’m sorry for the spoilers! I had to find an accurate Australian poster!). More harsh than Erin’s sudden morphing into an entirely capable killing machine in her own right was the fact that any power the killers once had was immediately taken away the moment she “awakens”. It’s at this point that the viewer must approach the film as a revenge flick, and in that regard, it works.

You’re Next is tightly directed, as close-ups and ‘one-shots’ are common with constant emphasis being put on each character’s reactions to the current situation. Some clever shots are chosen in order to draw out a reveal or build anticipation for an action. For example, in the first attack on the group, we don’t see the point of impact when the initial arrow breaks through the glass and lodges into Tariq’s head until seconds later when the rest of the dinner table turns in a delayed reaction to witness him still-standing with the arrow protruding from his skull. And when an intruder is unknowingly stepping into a nail trap that Erin lays, the camera focuses firmly and tightly on the nails, leaving the viewer waiting for the foot to come into frame. 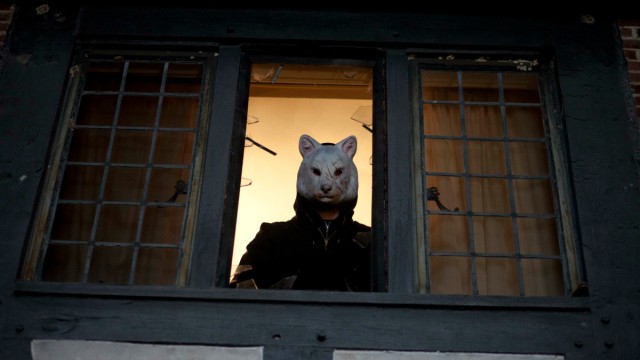 The film was shot in 35mm (anamorphic), with a Red One MX, resulting in crisp and clear imagery. As for the music, Mads Heldtberg handled the score – along with three other contributors – which is appropriately high-intensity and high-suspense when it needs to be. In the first act especially, during the more tense scenes where the viewer shares the dramatic irony of knowing the character in-frame is being watched, there is a shadowy ambience that sets the atmosphere perfectly. Later on, in the third act when the tide turns, a heavy 80’s inspired synth track kicks in that contradictorily feels both in-context and out of place – an odd choice that represents a bigger change in mode than the visuals could ever suggest.

While it is clear from the start that the filmmakers’ intentions were to create a comedic parody of the genre, the characters aren’t as dumb as you’d expect. For the most part, they avoid making silly decisions, although that mindset can be attested to the bravery and direction of the only truly competent person present in Erin. Speaking of, performances all around were schlocky except for Sharni Vinson’s, which may have been on purpose to support the idea of her being the only likeable character (although I doubt it given the low budget and number of unknowns in the cast). The power is eventually taken away from the villains, but the shift in tone from horror to revenge warrants it to a degree. It may be flawed, but You’re Next is an entertaining flick that delivers the gore and the laughs…maybe just not all for the right reasons.