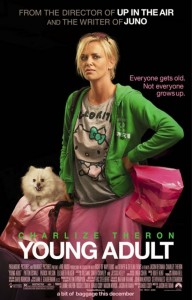 I have always respected Charlize Theron as an actor for choosing roles that aren’t your typical Hollywood roles, ones that don’t showcase her good looks but instead her acting talent. Young Adult follows the same pattern, with Theron playing an unlikeable protagonist, who – while very attractive – manages to alienate herself from just about everyone including (at times) the audience.

Mavis Gary (Charlize Theron) has been blessed with a terrible name, good looks, and an overpowering sense of self-esteem. A Young Adult author, she spends most of her days tuned to one reality show or another, consuming terrible food, and taking care of her tiny, fluffy dog who never seems to stop adoring her. Mavis is fantastic at lying to everyone, including herself, and there are more than a few moments where you wish she would just stop speaking and word vomiting all over the place. Long story short, she is incredibly unlikeable. Despite this, she is just quirky and odd enough to make you love her. 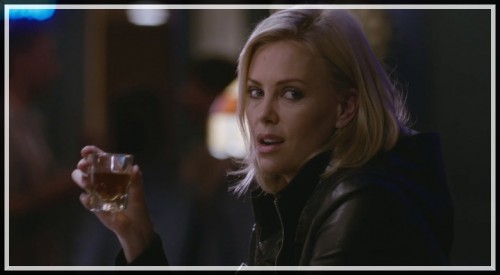 The film is written by Juno’s Diablo Cody, a quirky personality herself, so the tone of the movie comes as no surprise. It is odd, far from mainstream, and marches to the beat of its own drum. Quite a few laughs are to be had from this movie, though not from the usual places you’d expect them. I guess you could say the humour springs from honesty, not just honesty about life but about people. There are a few scenes in which the honesty of the characters and the reveal of a far more brash side than is usually shown in movies results in choice humour. Part of this is because you feel like you’re just hanging out with some of your friends, having a cheeky chuckle at the expense of others; some of it is surprise at a side you don’t get to see in movie protagonists. Protagonists usually are who we would like to be at our best, beautiful, witty, charming, overcoming odds and persevering. Mavis isn’t any of those, apart from beautiful of course. Theron has the utterly frustrating ability of looking drop dead gorgeous, even when hungover. 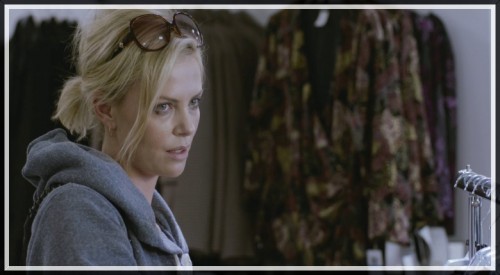 There is no black and white in this movie, which is probably what I liked the most about it. Mavis is far from the well-meaning, caring female lead, and her self-perceived nemesis is the total opposite of selfish, evil, and in any way bad. In fact, it’s almost like we’re seeing things from the perspective of the crazy lady who comes into rom-coms and causes problems for the two leads. This results in far more dimensions to the characters than you see in most mainstream films, with usual ‘depth’ being a difficult past, or parents, or some other sort of shallow issue that isn’t really that much of a character flaw. 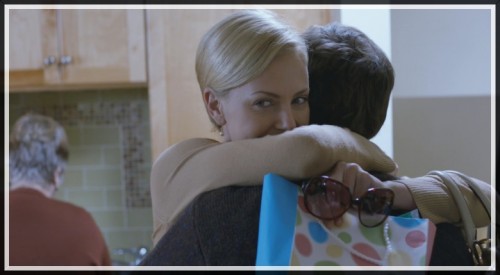 The ending might be something that not everyone will appreciate. For me, I was sort of expecting it because of how the rest of the movie went. It really is just an honest look into someone’s life, sure someone who is a lot more screwed up than your average person, but still. There isn’t a whole lot of closure, and some would argue that the character development is a bit circular, but that’s just how people are. We are simply silly creatures who hardly ever learn from our mistakes, and even if we do correct mistakes then we try and move on and pay it no mind.

Mental health is something that gets addressed pretty thoroughly, since Mavis is assumed to have some range of mental issues. It is never straight up addressed, revealed mostly in small hints and nudges. Theron’s portrayal of this is fantastic, she downplays everything, managing to make even the most subtle expression speak volumes. She really could not have been cast better, I can’t think of an actor with her amount of skill, and the looks to match. 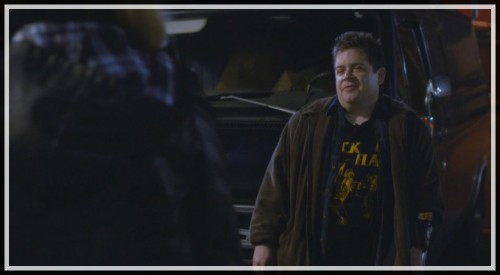 Visually, the movie is top notch. Even though it doesn’t seem mainstream in terms of the plot, it still looks just as good as what you’d expect from a mainstream movie. There is quite a bit of visual humour, though again not in the way that is usual, and a lot of the time Theron will do the simplest action or expression and it will cause quite an entertaining result.

Music plays an important part in the movie, particularly in the beginning. One of the things that Mavis focuses on is a mixtape that her old flame Buddy made for her back in high school, which includes a few songs that will pop up and have a huge amount of meaning tied to them. The soundtrack always does really well to spurn the tempo of the movie on, it doesn’t really feel like it drags in any place and the music (or sometimes the abrupt lack of music) helps with that.

Young Adult is nothing if not an entertaining film. While it may not suit some people due to it’s deviation from the mainstream approach to comedy, romance and character archetypes, I think it is a very welcome change. Theron plays the role perfectly, being utterly unlikable but also making the audience have a soft spot for her through the subtlest of actions.

For those of you sick of watching the same movie over and over again, with different actors and different dialogue, this movie is perfect. Not only does it challenge the usual, but also it does so in such an honest way that it can’t be faulted, nor can it be accused of purposefully being overly ‘alternative’ (as Juno may have been victim of).