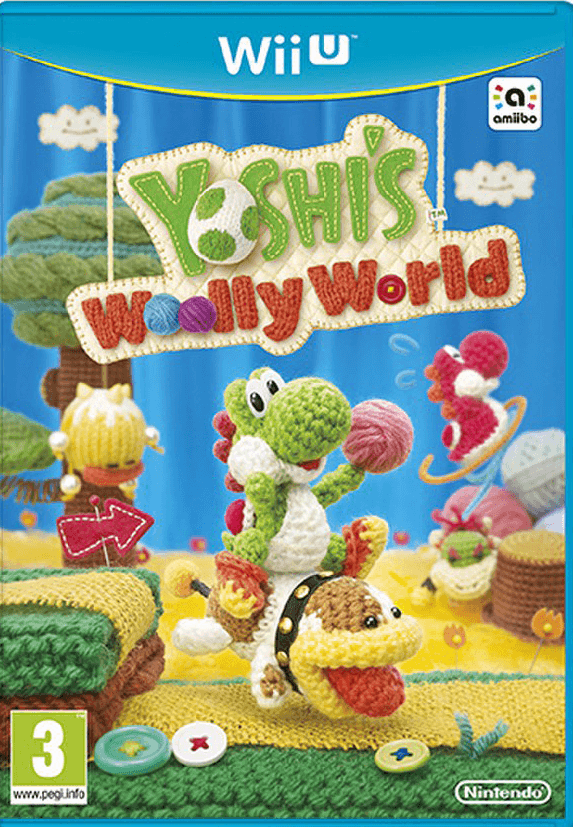 Yoshi’s Woolly Word is the seventh title in the core Yoshi franchise consisting of games such as the SNES classic Yoshi’s Island and the Nintendo 64 title Yoshi’s Story released in 1999. Woolly World is actually the first home console release since Yoshi’s Story and has a lot of expectation riding on it. Does Woolly World manage to satisfy these high expectations or does the entire game unravel into a big woolly mess?

Unlike Woolly World’s games visuals this story is about as unoriginal as you can get. The evil minion Kamek pays a visit to Craft Island, the peaceful home of the Yoshi’s and then decides to turn them into wool so he can use them for his own evil purposes. Kamek then flies away, dropping some wool along the way and it’s up to the main Yoshi to rescue everyone. If you were expecting an epic yarn here (no reference to the Kirby game) than you will be dissapointed, but at least there is some sense of plot to give reason as to why Yoshi is traversing the world. 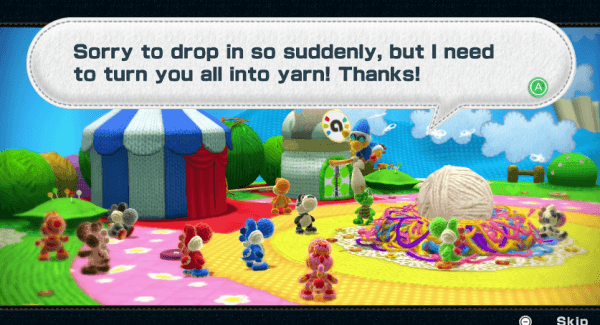 At it’s woolen heart, Woolly World is a rather simple 2D platformer that uses its aesthetic and being set in the world of Mario to its advantage. Yoshi controls like a dream and his signature moves from past games such as the flutter jump and ability to throw eggs (yarn balls in this case) all make a welcome return. It’s really fun to use angles strategically to bounce the yarn off a wall or the roof to incapacitate an enemy or hit a hard to reach collectable. There is an alternate control scheme and a hasty mode for egg throwing that some users will definitely appreciate.

For every level that is rather simple there is often three that will impress. Yoshi’s Woolly World probably won’t present much challenge to advanced players, but it is just hard enough to not become boring while still remaining fun and accessible for less experienced gamers. Levels that contain a unique aspect such as a puzzle element that requires some thinking or a transformation are among the most memorable. One example of a great level theme involves a Chomp that follows Yoshi around constantly and can be turned into wool or unraveled at any time. It’s up to the player to lure the Chomp around and decide what form is needed to progress through the level as well as avoid being hit, as of course Chomp is still a rather dangerous adversary. 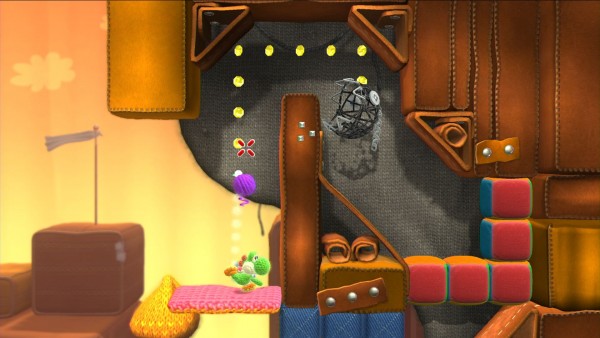 There are definitely no ‘bad’ levels however some can be a little frustrating. I’m mostly referring to levels with a central door that you have to return to after exploring multiple paths around it gathering keys. Dying in these levels is not fun as there is often one checkpoint and you will have to run through all the paths again and recollect everything again if you hope to progress. Basically you’ll be happy to revisit some levels for the collectibles and thankful you got them all in one go in others.

Speaking of collectibles, fans of old Rare 64 games are in for a treat. Each level contains the basic beads which are used as a currency, five Flowers, five Wonder Wools, 20 stamps and will also reward you for completing the level with 20 hearts which are basically another collectible and test your ability to survive a level unscathed. For the most part, these are fun to collect and are where most of the challenge in levels stem from. Level exploration is highly rewarded as a fair percentage of collectibles are hidden behind a fake wall or behind an invisible question mark cloud that must be made visible by hoping you get Yoshi to pass over it. 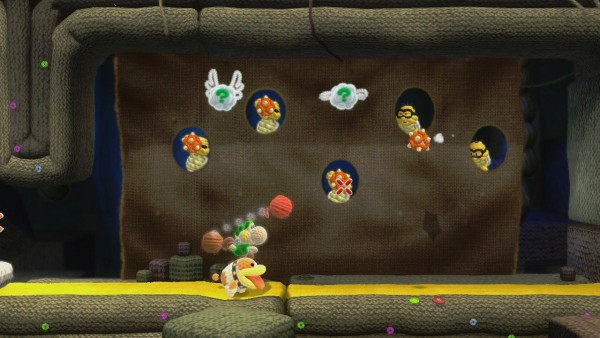 Sometimes this can all be a bit much especially if you are missing one stamp or flower, but thankfully there is a secret radar badge you can use later in the game to help find some of the more well-hidden ones. The rewards for these collectibles are rather substantial at least, including things like Yoshi skins, a new game mode and even new levels should you have the patience to track down everything in the game. Of course perfectionist have their 100% to work towards and there are even Pink Flowers you can earn to show that you got all four collectibles in one go! (Good luck with that one guys.)

The boss battles like the story suffer from a bit of that simplistic Nintendo repetitiveness. The classic jump/Ground Pound three times when the boss leaves itself open is in full effect here and some bosses are reused albeit with different patterns. This doesn’t mean the game’s bosses aren’t fun nor are some easy to defeat, there’s just a sense of I’ve seen that before due to the amount of 2D platformers Nintendo consoles have seen as of late. 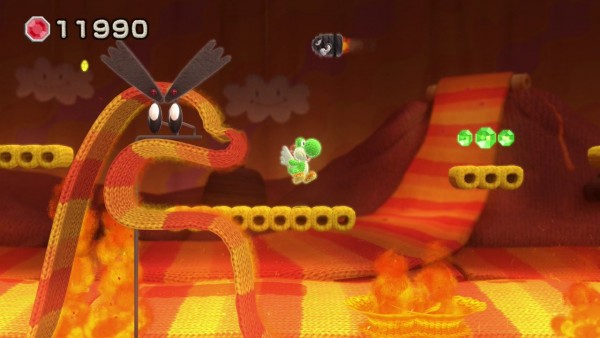 The game isn’t highly challenging at a base level but it makes no shortage of attempts to make the game even easier. Power badges that are bought with beads can give you certain advantages such as a fire immunity or ability to spit endless watermelon bullets and there is Mellow Mode which you can switch to at any time to give Yoshi wings so he can hover indefinitely, very helpful for levels where precise jumping is needed. The power badges are fun to mess around and will no doubt aid some players conquer the game. Mellow Mode seems like a step too far in helping the player though and they can even buy cheap Power Badges to skip courses entirely, but an optional mode that most likely will help some players it’s hard to say anything bad about it.

Using a Yarn Yoshi Amiibo in Woolly World will give you access to two Yoshi on the screen at once, exactly like the Double Cherry item seen in Super Mario World. This is a fun feature but in most levels it would seen this would be more of a hindrance then assist. It’s handy that you always have a Yoshi you can turn into a yarn ball if you need one, however if they get separated trying to maneuver a level from two different positions is sometimes impossible. 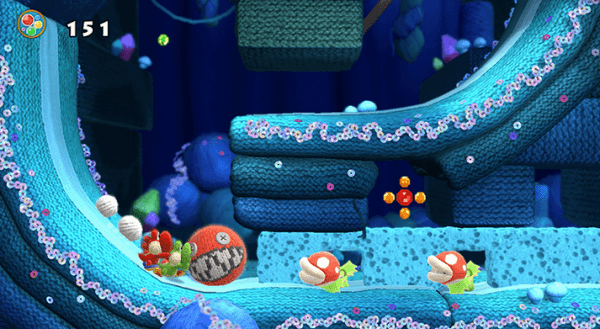 While the double Yoshi functionality on it’s own is a little useless, bringing in a second player in co-op mode is a well done experience and allows two people to play the entirety of the game together. Nearly all Wii U control methods are accepted making the mode inviting and simple to get into. Eating your friend’s Yoshi is good for a laugh and there is also a bit of competition when you get to play end of level bonus games which are fun and great for bragging rights. Nintendo have done a great job introducing co-op into their platformers in recent years and this game continues a welcome tradition. There are no Wii U specific features but off-TV play is available.

The visuals are definitely the main draw card for this game and are both beautiful to look at and technically amazing. This game is damn cute. Everything has a ‘craft’ aesthetic making it seem as though the entire world was created from your grandmother’s knitting basket. There are heaps of cool visual nuances that take the craft theme even further. Shy Guys carry crochet hooks to try and hurt Yoshi, platforms you create with yarn match the colour of the yarn ball you threw, snow is actually cotton wool and there is a loose fuzz aura that surrounds many of the woolen models. This unique style piled on top of Nintendo’s signature colourful look and ability to bring out the best in their systems graphics makes Woolly World stunning to look at in HD. 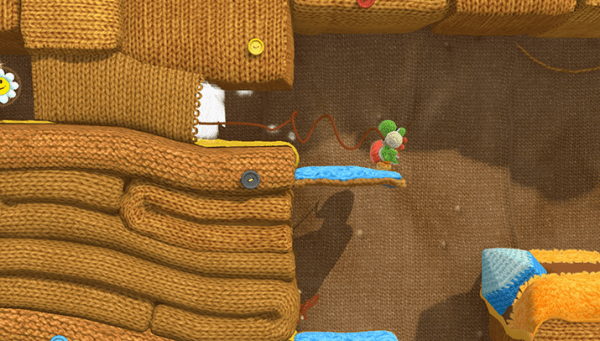 Apart from looking incredibly cute, the special visuals also open up new game mechanics. Unraveling a loose piece of string to reveal a secret or slowly destroying a large block of sponge to carve a path for yourself are just some examples that aid the level design nicely.

The Yoshi’s themselves have over 50 designs that players unlock from beating levels and collecting each of the 5 yarn pieces or by scanning any Amiibos they may have (except Pokemon Amiibo who just give a generic Amiibo pattern). These Yoshi don’t have any special abilities but are very cute and a nice reward for collecting all the Wonder Wools in that level. 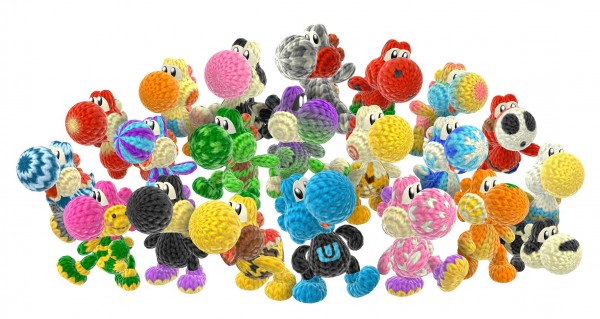 One of the only negatives I can give the visuals is that the frame rate feels deliberately lowered in the over world. This seems to be a choice made by the developers rather than being due to technical limitations but not one I appreciated as it gave the over world a ‘cheaper’ feel and made it feel segregated from the levels.

All the classic Yoshi sound effects are here from the ‘flutter jump’ struggle to the ‘making an egg’ sound and they are all over the top cute. Seriously, go Ground Pound a Poochy and listen to the sound he makes (you will probably feel bad afterwards). All the sounds of the world such as unraveling part of the stage, revealing a secret or jumping off a bounce ball are just as adorable and fitting. 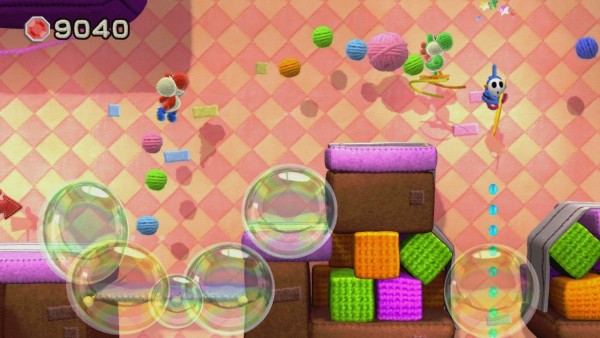 As for the soundtrack, honestly it was largely forgettable in my opinion but it never felt like any of the music was out of place with the games look. There are some songs you will find yourself humming such as the song from the first level or world 2-2 but I personally wouldn’t be picking up the games soundtrack.

If you’re a fan of the Yoshi series or the 2D platformer there is no reason for you not to pick up Yoshi’s Woolly World. This is a fantastic game that delivers just the right amount of challenge for new and experienced players alike, both of which will have no problem appreciating the mostly fantastic level design and beautiful craft aesthetic that is delivered brilliantly through the Wii U system. A few rare levels may be forgettable as is the majority of the soundtrack and the throw away story, however these negatives do little to detract from the overall quality of Woolly World.