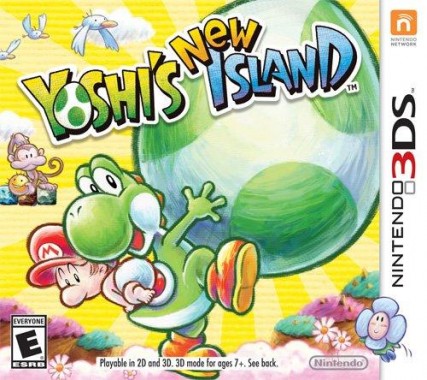 Overview
Yoshi’s Island has always been that one game in Nintendo’s library that was like a precious, untouched gem. Sure, it had a follow-up of sorts on the Nintendo DS, but most either enjoyed it or ignored it – retaining their memories of that magical art style and childlike atmosphere that the first brought long ago. When you throw the word “New” in the middle of a title however, you set expectations immediately. Something more polished, modern, and welcoming was indeed what most expected with Yoshi’s New Island for that very reason. Does it set a new bar, or ride along safely to keep every crowd content? Let’s find out.

Story
The story of Yoshi’s New Island isn’t too much of  a stretch from the first by any means. Taking place right after the original tale, this title sees a stork delivering a young Baby Luigi and Baby Mario before being ambushed by Kamek and setting the scene for Baby Mario to fall into the hands of a group of Yoshi. Of course Mario is loyal to his brother, and with the help of his dinosaur friends is out to save the day yet again. 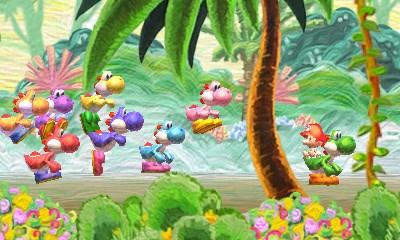 Before you think any thoughts of doubt over the plain story involved, let me say that its not that stale. In fact, there are a good amount of charming moments that will be sure to put a smile on the face of even the coldest of players. There is however an overwhelming feeling of familiar elements that make the entire narrative feel like deja vu. If this was a remake, that would be fine. A reboot? Sure, I’ll take that too. Being nearly a direct sequel and sporting that “New” word however makes the game feel like more of a disappointment in terms of a story, as even though the setting is the same, a lot could have been done to make it at least feel like a brand new adventure. 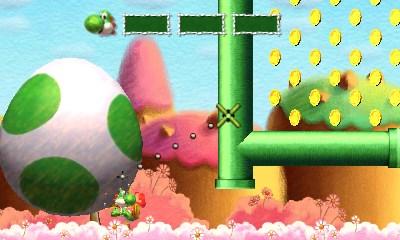 Gameplay
Much like the story, a lot to the gameplay with Yoshi’s New Island is familiar. Being a pure platformer at heart, the main concept is too traverse each level within the six worlds while keeping Baby Mario safe and make it to the goal. Along the way, there are red coins,  flowers, and stars to collect that give great reason to go back in for more if you happen to be one of those who have to 100% everything.  Players are of course equipped with the power to turn enemies into eggs, and then proceed to shoot them at other enemies or objects, occasionally solving a puzzle  along the way. Yoshi comes with smooth handling on the 3DS, and as you would hope – not a lot has went downhill in terms of this egg staying solid. 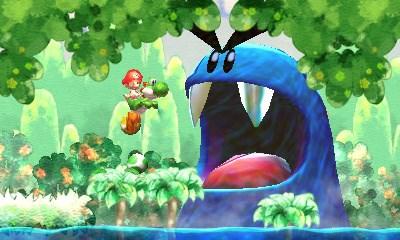 While the gameplay is indeed good, we never really asked for the same game from twenty years ago to be re-released in another form, and Nintendo knew this when they added a few tweaks to the formula. The major addition within are the large enemies that can be gobbled up, leaving a huge egg rolling behind Yoshi until fired. Once launched, warp pipes, foes, and everything in-between is destroyed with a nice satisfying steam rolling effect taking place. Usually, this unique power is utilized to open up a path or to gain access to a flower (or similar collectible), but its a fresh idea that works in this multicolored world. Some stages also make use of the gyro sensor within the 3DS, giving the player a small break from the norm while Yoshi transforms into a vehicle for transport. These little portions are short, but come in well to add a bit of a new flavor overall. 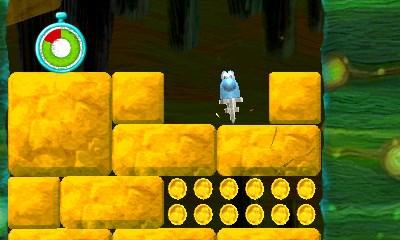 Jumping on enemies, firing eggs, and rolling over foes is enough to make a decent platformer, but its the stages that truly do all the work here. While some stages are rather flat, stretched out, and end without much celebration, others can make up for that with some rather intense encounters, such as a chain-chomp that can chase the player through a level. Boss battles are another highlight of the experience, making some of the bland worlds end on a high note with brilliant usage of Yoshi’s abilities and style – which is the very reason most should be playing this title to start with – as Yoshi’s Island was meant to be a change of pace from the standard Mario game years ago and with the slew of “New Super Mario Bros” titles over the years, this little Yoshi adventure does well to deliver a nice change of pace. 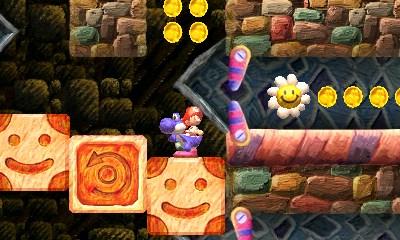 I did however use the word bland a moment ago, and I feel I should elaborate. There were no moments I ever felt bored within Yoshi’s New Island, as it is a clever title that deserves praise. Sans the boss battles and a few other spots that make use of the new features, I couldn’t help but feel like I had done this all before. Its kind of like when you watch a great movie, and smiled thoroughly for the entire experience. Afterwards, you watched it again and again, but that same wave of freshness was never there again to give you that spark from the first time. That is how Yoshi’s New Island is to those of us who played Yoshi’s Island over and over, be it on the Super Nintendo or Game Boy Advance. When you have a game that doesn’t shake enough of the foundation to prove itself as a sequel, you end up with a serviceable, yet unexciting game that doesn’t bring enough into the experience to keep the player completely immersed (Bioshock 2 critics, you know what I’m speaking about here).

Visuals
Perhaps the most important element within Yoshi’s New Island that some were concerned about was in fact just how these graphics would come together. Worlds are now made with a unique watercolor design, with scribble of crayon and outline making the bold colors pop just a bit to create that innocent atmosphere one would expect to see within Yoshi’s New Island. While some may not like it compared to the completely 2D stylings, I love the art style and find it to be an improvement. Sure, Yoshi’s model is a bit unfitting in this world, but that is a quickly forgettable offense as there is enough nostalgia flowing within these walls to still lighten the load of any visible flaws. 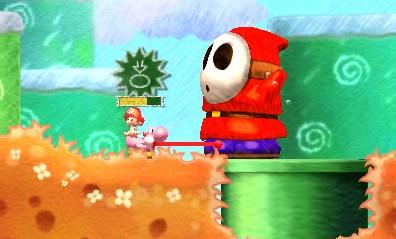 Audio
The soundtrack is going to be a love it or hate it scenario. Nintendo decided Kazoos were the way to go to create that lovely island of Yoshi essence, and they definitely make for a unique tune to play too. Now, other than kazoos we also have cute little melodies that are not as memorable and the general fare that fade into the background, coming together with everything to create an impressive, if not slightly less inspiring package as a whole. Oh yeah, Yoshi still makes that lovable grunt and cry when jumping – for those curious if he still sounded the same.

Overall
Yoshi’s New Island is a lot of things. A great game that is fulfilling from beginning to end. A title with a light heart and a lot of charms. What it is also however is a sign of the times. This is a title that utilizes nostalgia and old tricks to perform a solid end result, and while it was successful, I can’t help but feel that the creativity that went into it dried up quickly in development. Its hard not to feel like this title could have been something more as it commits the sin that so many of the “New” titles have in the past with Nintendo. Sure, we get a great game, but not one that will be “New” forever, as Yoshi’s eggs were served before in another basket and this time around, the creativity and imagination missing leaves not enough magic on the plate we were given.