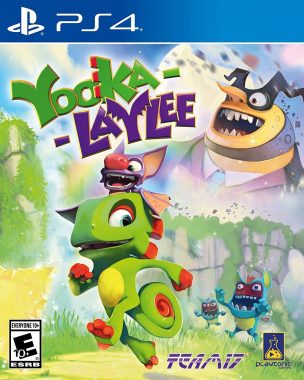 I think everyone had that franchise that they grew up with – or a genre in this case that defined their childhood. I remember getting Donkey Kong 64 for my thirteenth birthday, and being blown away. For someone who loved to explore worlds in video games, this title had so much content, so much character, and stages that you could spend hours playing as there was always something to do. I would shortly after discover Banjo-Kazooie, Tooie, and Conker, and fall into the wondrous world of Rareware, a company that had personality dripping from each pixel they touched.

Despite the company selling to Microsoft, I held out hope that I would once again get another trip to a Frantic Factory or Bubblegoop Swamp, but aside from the wonderful Viva Pinata series (that had nothing in common with the aforementioned titles aside from color and personality), we really haven’t seen another 3D platformer to ever come out from the much loved development team. Enter Playtonic. With a good grouping of former employees of Rare and some assistance from fans through crowd funding, we now have a bat, a chameleon, and a brand new adventure that looks to scratch an imaginative itch for a new generation. How does Yooka-Laylee fare? Let’s find out!

Yooka-Laylee are two quirky characters that (as mentioned) consist of a kooky female bat named Laylee and a grounded, clever male chameleon by the name of Yooka. One day while the two are sitting around their home of Shipwreck Creek, Laylee shows off The One Book, which unbeknownst to them actually has the power to rewrite the history of the Universe. Being a cartoony plot, the evil Capital Bee and his sidekick, Dr. Quack – who are in search of the book emerge, sucking the book into their domain of The Hivory Towers – while losing every page in the process. 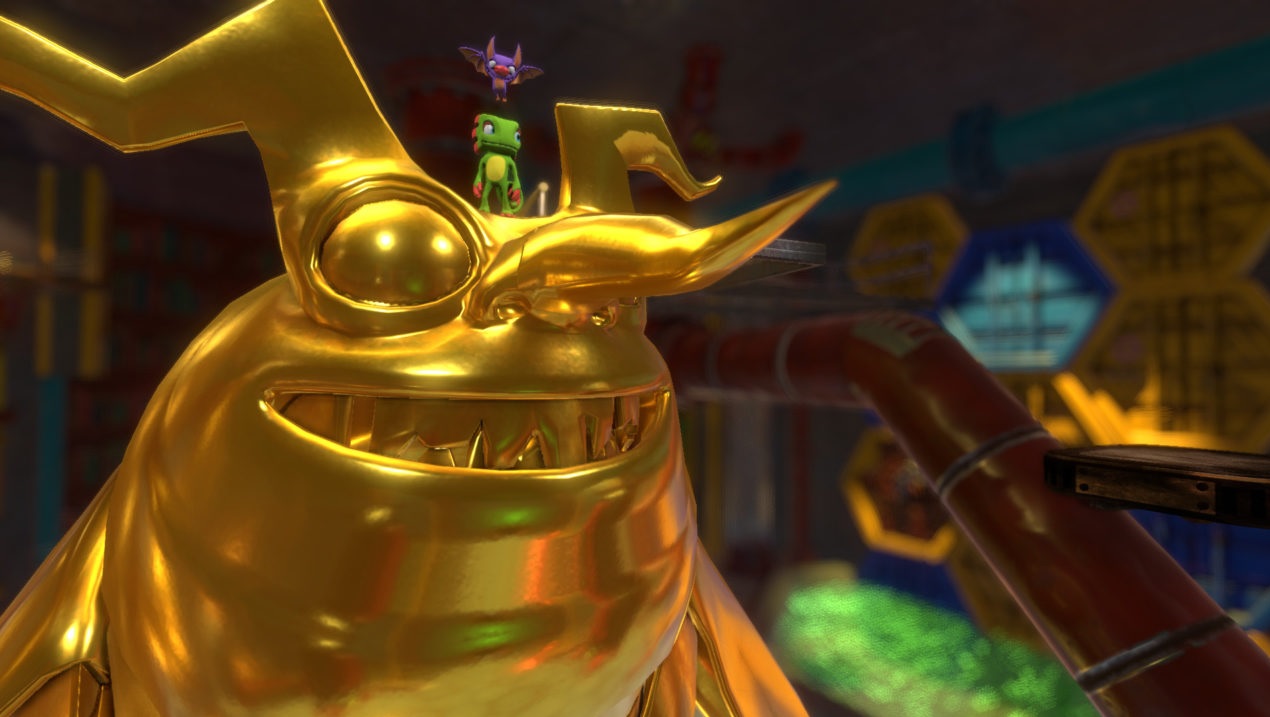 With all of this commotion taking place, Yooka and Laylee decide to team up and go after every page, so they can restore the book and bring peace to their little world. Every single page of this book are called “Pagies” and have little googly eyes, with jolly little spirits. In fact, just like Banjo, DK64, and so on – almost all of the inanimate objects in the game have little eyes and feisty demeanors, adding to the already charming narrative involved. Players will find snowmen with missing hats, thirsty clouds, and so many other memorable characters within the worlds of Yooka-Laylee that for spoiler purposes, it would be criminal to begin to detail too much and take those interactions away from a new player in this review. I will however say that I don’t think I have smiled so much while reading dialogue of NPCs since playing Conker’s Bad Fur Day years ago. 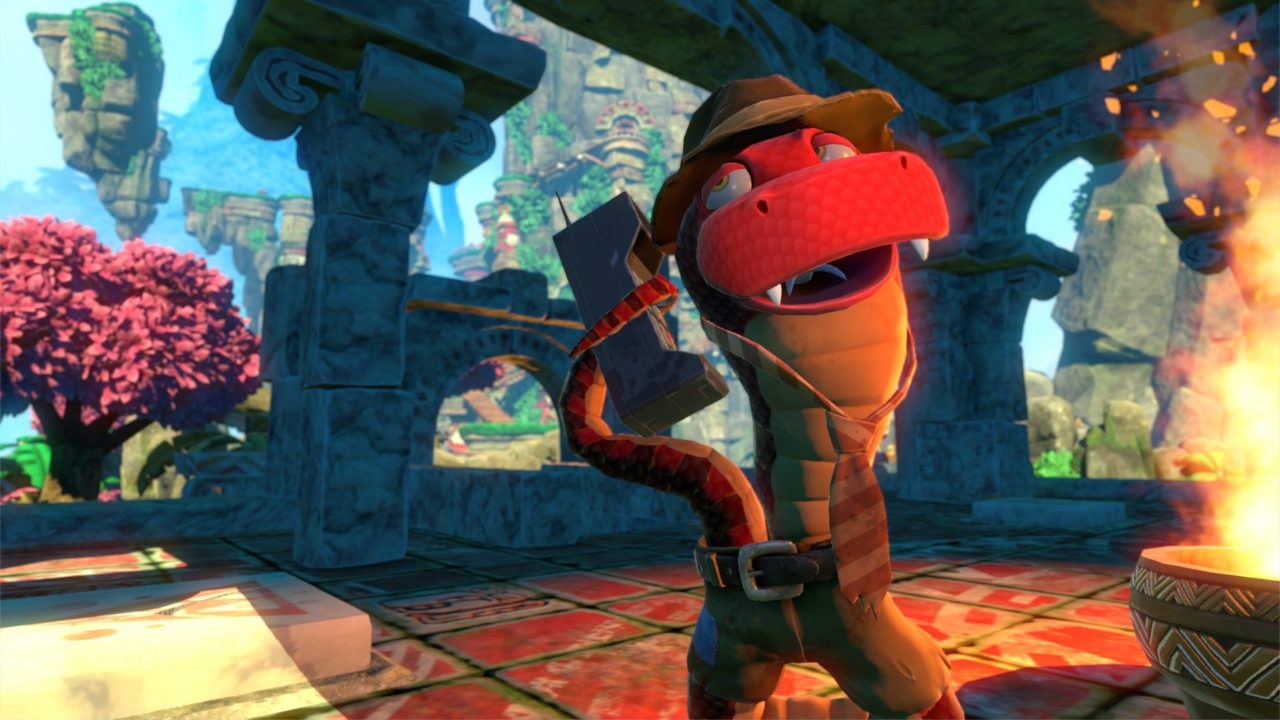 That is the atmosphere on display here, so if you are looking for something light, airy, and fun that still manages to keep a clever reserve of whit and charm, Yooka-Laylee has the world you need to visit. This is the kind of game where bosses stop attacking to tell you their regrets in life and the forth wall is pecked at, but not blasted through to keep players immersed while delivering an innocent stab at the modern gaming industry. The writing is brilliant and in my opinion some of the most comedic delivery we have had in a game this generation.

Yooka-Laylee sets out to not redefine, but recreate everything we know about the very genre of game that Rareware built in the late 90’s/early 2000’s. Instead of innovation, Playtonic have attacked this genre with polish and finesse, ensuring that some of those old hassles with prior titles would not be an issue in this game. For instance, camera angles in water during Banjo-Kazooie use to be a drag, and now our new buddies don’t have that problem. Stage transitions are seamless, and smack the player in the face with nostalgia with the silhouette of the heads of our two main protagonists during every entry to a new area. In fact, there are so many familiar elements at play here that anyone who even remotely played Banjo or any similar title will feel right at home. It’s a rare comfort to experience, as at the center of the gameplay comes discovery – and that element is what every maneuver, power, pickup, and puzzle is essentially built around. 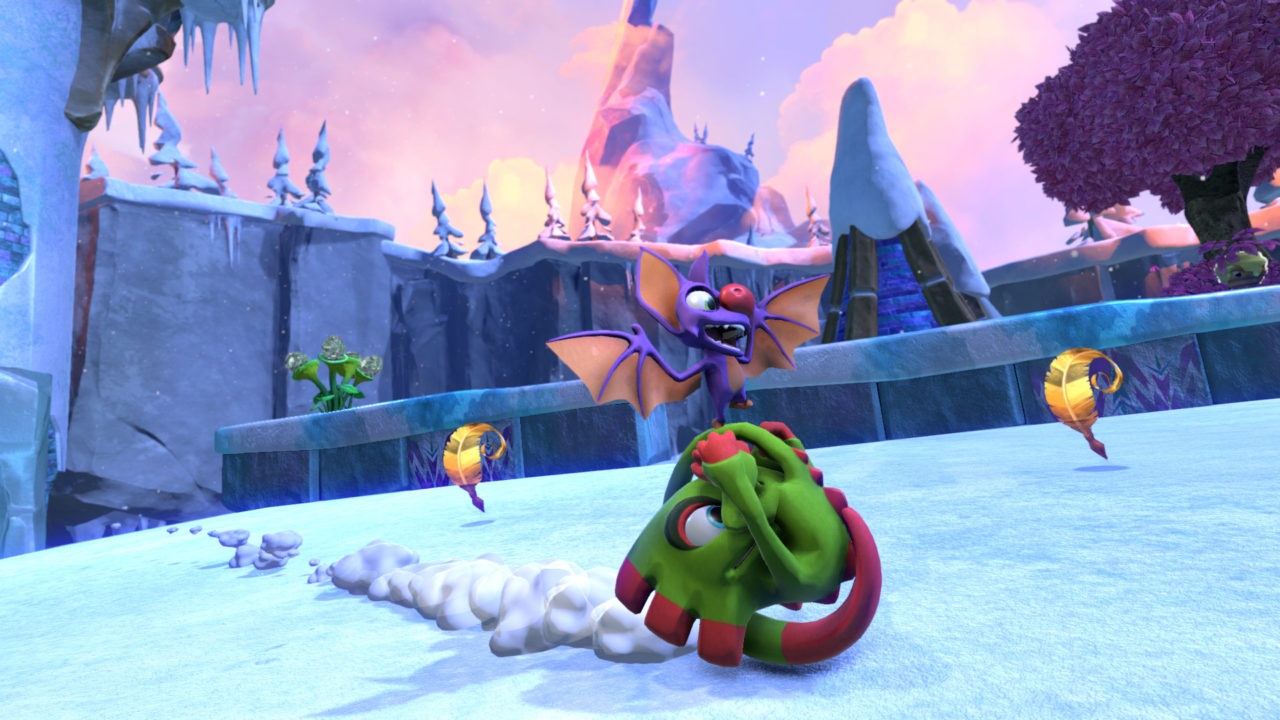 As players start the first world, they will quickly learn that in order to progress, they must buy abilities from Trowser – a cunning business-snake that wears pants. Instead of music notes, players must search each area for quills that they can exchange for abilities or simply collect for the sake of collecting. Once enough quills are gathered, you can then trade them and obtain powers that will grant you access into new areas within each world. For instance, a high jump that launches our heroes in the air is needed for almost every mission after the first world. Laylee also has a great sonar that finds secrets and wakes sleeping allies that in turn start missions. There are a good number of abilities within the game, and thankfully the controls are so fluid that utilizing them is just as fun as doing all of the hunting in order to find each piece required to move forward. 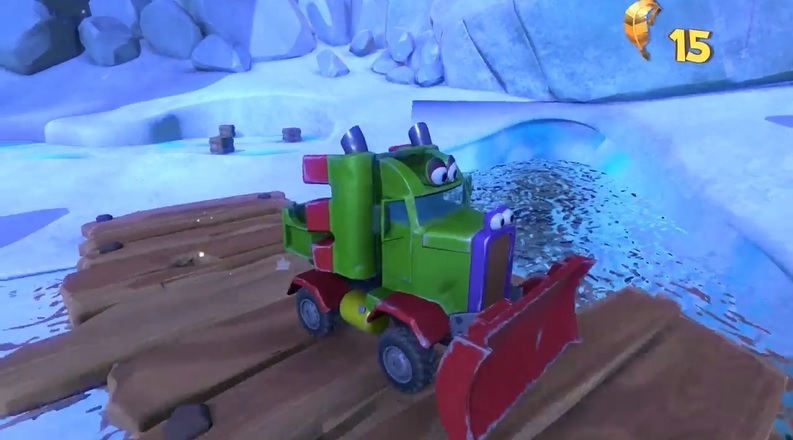 Molecules are a very rare item within each stage and also open up new areas within the game as each one found can offer the ability to transform into a special creature. Remember the ant in Banjo-Kazooie? It’s the same logic at work here, but with a bit more attention to detail and interactivity this time around. Once the player obtains so many Pagies’ by doing odd jobs around the current Tome (which are the actual names for the stages), they can completely upgrade that world by doing a swap – or simply move to a new Tome that will offer a bit more variety and fresh sights. Upgrading Tomes changes a lot, as it essentially opens doors that were once locked and takes walls that were once disguised, turning them into a fresh route to traverse on.
While you explore the game at your own pace, there will be times where you realize you cannot proceed without going to the next Tome. Some powers obtained in latter levels are required to grant access in places located earlier on, so getting “stuck” is a thing that can happen if you don’t open your mind to the entire world, rather than keeping the impossible mindset to collect everything in one Tome before moving on. If anything, this does nothing but improve the pacing for the overall experience, as it allows for the player to take a break from one world and get sucked into another – only to go back and do it all again.

The platforming sections are generally easy, but make no mistake – there is a good amount of challenge in the game. Precision, timing, and patience – mixed with a tiny bit of non-punishing trial and error make up a hefty portion of the puzzles within Yooka-Laylee, so you running like you’re Sonic can make you fall all the way back down to the ground and have to make a long climb back up a treacherous mountain. This world also demands you interact with it. While there were several hints, I took two hours to understand that I needed to lick honey in order to climb up a slippery slope. I suppose I just am not used to interacting with everything – but again, for a game centered around the idea of discovery, this is yet another positive element of gameplay. 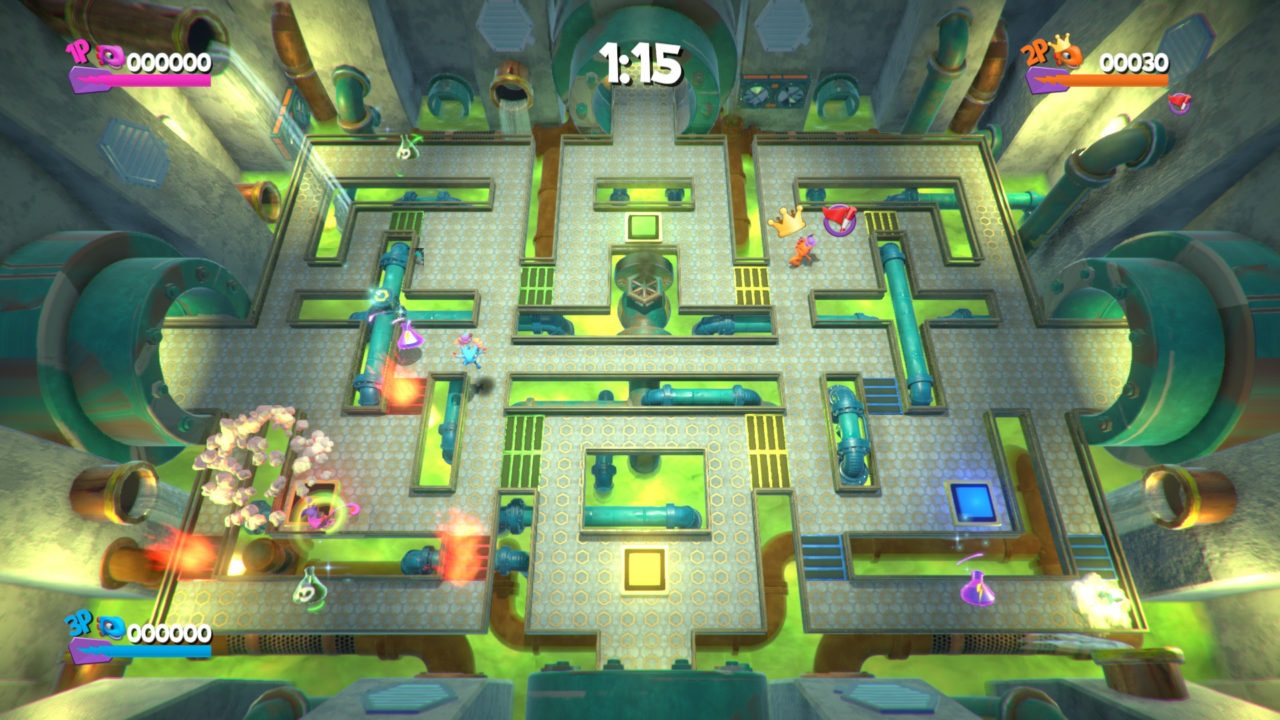 Speaking of licking things, one of the best mechanics players will experience are the berries they can swallow in order to gain projectiles. Blue gives water, clear allows for ice pellets, red for fire, black for explosions, and so on. Each one of these powers come into play several times during environmental puzzles and boss battles alike, so be prepared to swallow and shoot during quite a few segments. I know this review is getting wordy, but there is simply so much to do within the game, and so many gameplay aspects to cover. From revisiting old, familiar territory of other Rare titles to playing in the game’s own arcade (which has local multiplayer – mind you), the content here is overflowing, and the quality thankfully never misses a beat throughout all of those hours spent as this lovely little duo. 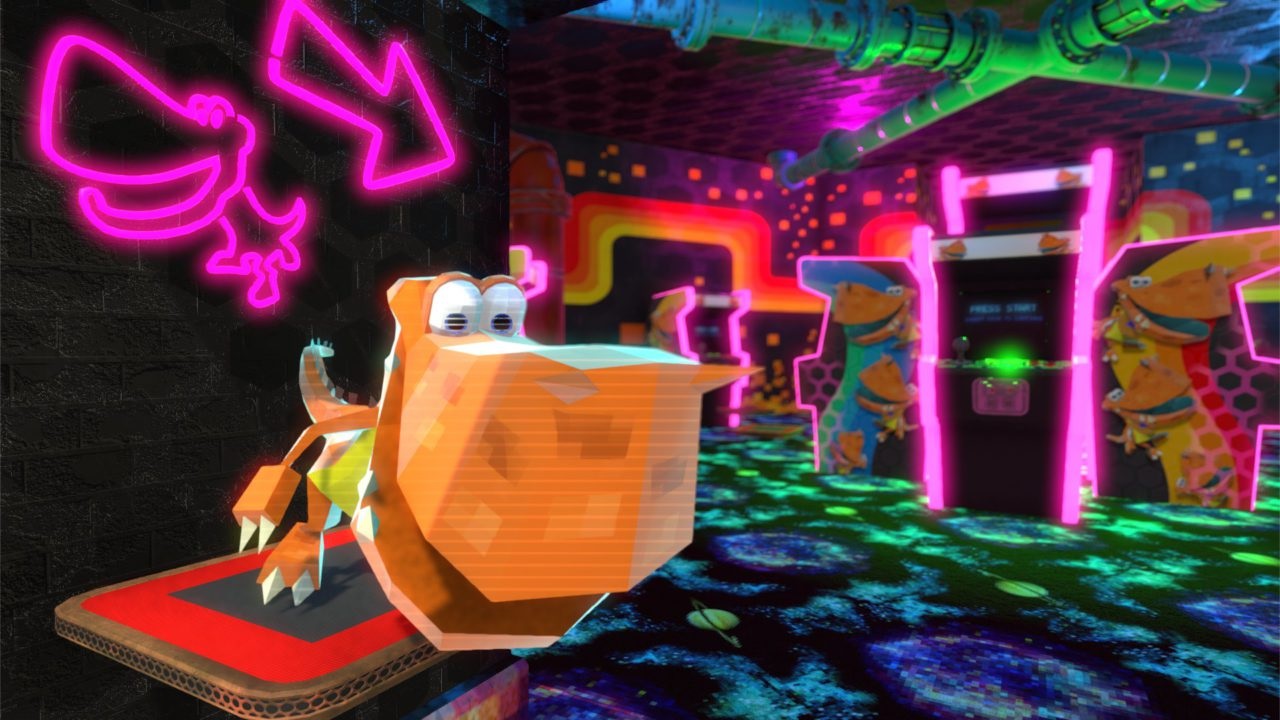 Yooka-Laylee is gorgeous. Much like Viva Pinata (which has the same artist involved), the colors here are very vivid and strong, greeting the player with lovely eye candy for each Tome discovered. Every single character model has so much charm and goofiness to it as well that its hard not to take ten steps without cracking a smile as you see a letter with eyes dragging itself across the ground. There is just so much imagination in this game that we don’t get to see in the industry these days. Humor in a platformer now is usually made up of re-used jokes from memes or self-aware bits that go too far to get their point across. Yooka-Laylee, by visuals alone, has enough humor and originality in its world to keep one entertained for hours at a time. 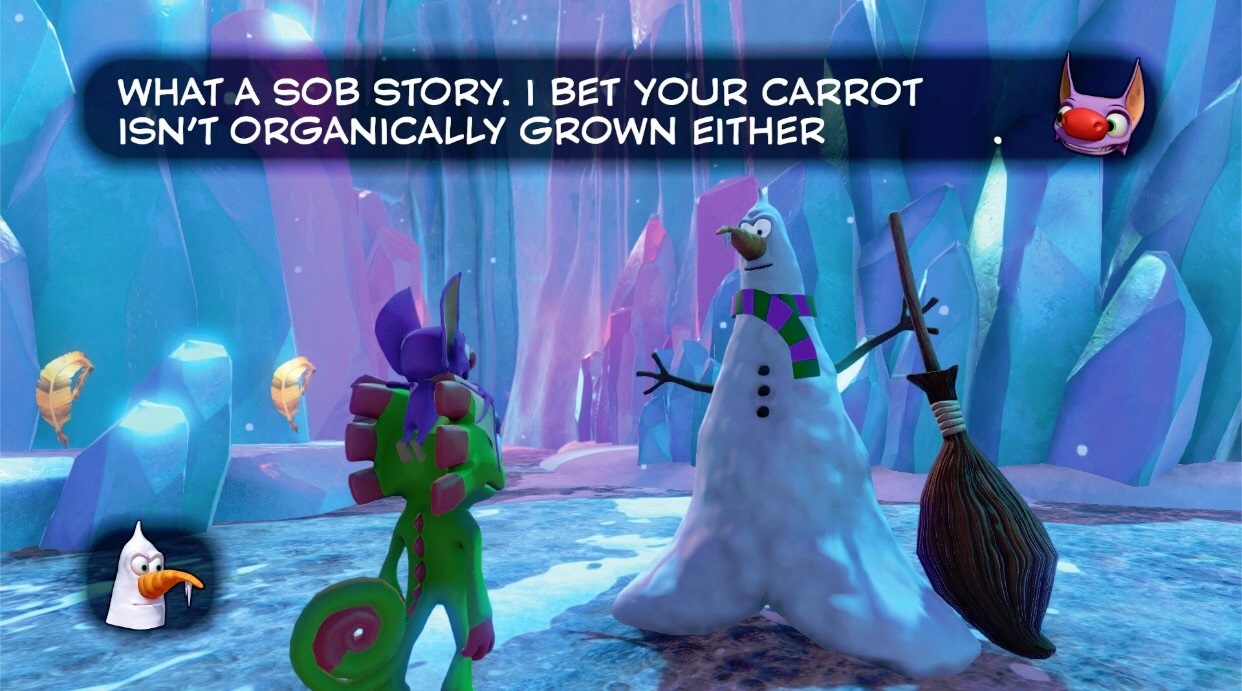 The soundtrack is also amazing. Grant Kirkhope has knocked the tunes packed in here out of the park. Every Tome has multiple tracks that set the scene and deliver a specific mood based on your situation, so while you maybe having a quirky little adventure outside one moment, you may be finding something more soothing and sinister by entering that next doorway. The dialogue delivery will come as no surprise to those who love their Banjo, as it is done in the same offbeat, grunting style of both platformers on the Nintendo 64. There are a lot of little effects that tie this universe together, and the perfection achieved on the sound side of things for the game simply make The Hivory Towers a joy to explore.

Yooka-Laylee is not just a fresh IP, but the rebirth of a genre. Playtonic may have done this as a passion project to offer a taste of nostalgia for fans, but in turn they also managed to create one of the most imaginative platformers for this entire generation. Yooka-Laylee is a title laced in humor that never sacrifices its intelligence or quality in order to keep the player invested. There is so much to do, and so much to discover that these two little protagonists will keep your heart full with wickedly fun gameplay that is found until the very last Pagie turns. 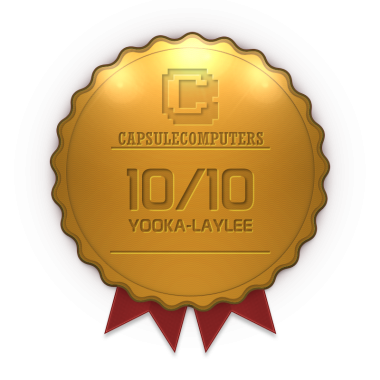