In recent years there has been a decline in the rally-sim, usually ousted in favour of something a little more arcade-like and a little less simulator-like. Even the Colin McRae franchise, which was once a very ‘core experience with an emphasis on precision driving and steady navigation of each course, has been turned into a more arcade-style driving experience recently through the DiRT series. Thankfully, spotting the gap in the market, developers Milestone with the help of publishers Black Bean have put their offer on the table in the form of WRC FIA World Rally Championship, the official licensed rally game of 2010. 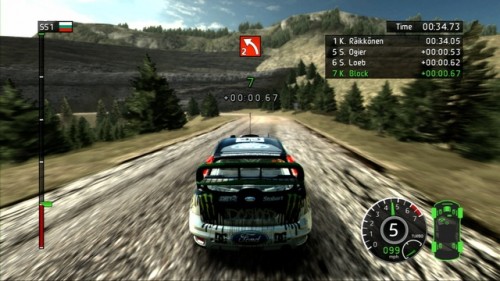 As the license holders of everything rally-related, they’ve been able to bring World Rally Championship back to our consoles, and the license really does work wonders for the game; the same calendar and tour of the real-life sport; official cars with sponsors emblazoned on each and every free space; all four official categories of the sport (WRC, JWRC, PWRC, SWRC); and real rally driver names racing on real-world tracks. These all add up to give the game an authentic feel, further backed up by other realistic features which aren’t linked to the license. Such as 32 types of car damages, a variety of weather conditions out on the track over a wealth of different course surfaces, and just generally a huge choice of different game modes to play. 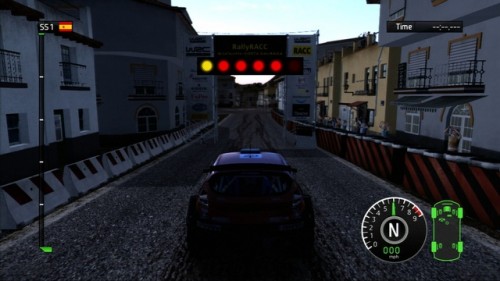 Then there is the gameplay, which is just phenomenal. The handling is great, the courses are well designed and most important of all, it is challenging but to a point where it is still enjoyable. Instead of putting you off playing with unwelcome levels of frustration, it challenges you in order to stimulate your enjoyment of the game, causing you to aspire to improve rather than abandon it as a lost cause. You are more inclined to practice and perfect one corner you are struggling with, rather than give up. However, this is partly down to the superb handling. It’s realistic and reflects the surface you are racing on, staying true to the sport. If you are racing on tarmac then the tyres grip to the track, offering responsive and sharp turning, but if you’re racing through a forest in wet conditions or on dusty track in the desert (more common occurrences given the title’s off-road nature), you will quickly find that power sliding becomes key, but if you aren’t careful, you can easily lose control and spin out of control. The handling, when combined with the responsive controls, makes for brilliant rally experience with the realism putting it under the ‘simulation’ category and, in turn, setting WRC aside from the competitors on the market.

Don’t get me wrong though, just because it is classed as a rally simulation doesn’t mean it is boring, nor does it mean it is inaccessible. In actual fact it is an exhilarating game to play, working out how to manoeuvre through corners at speed, and demanding quick response times as you react the instructions of you’re co-driver. That’s right, one of the defining features of rally games are the co-drivers, and WRC is no different, with helpful audio notes guiding you through all sections of the courses. Occasionally it is a little behind the actual race action, with your pal in the opposite seat saying something like “handbrake turn, rocks-don’t cut” just as you are ploughing into said wall of rocks, but in general it is very good, in-time with the course, with concise instructions which manage to portray exactly what lays ahead. 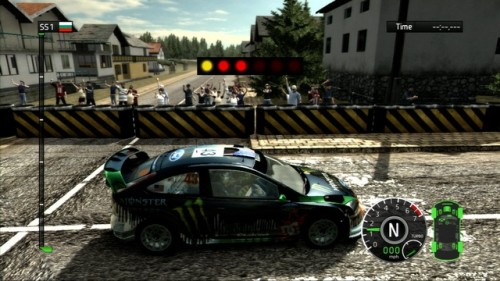 Although it does have a steep learning curve, it also isn’t as inaccessible as you might think. This is mainly down to the thoughtful inclusion of the mode known as ’WRC Academy’, which is basically just a short school of rally driving. It provides 16 different challenges over two different categories, basic and advanced, ensuring to cover all aspects of the racing so when you race for real you will be able to cover the course at speed and reduce errors, shaving off precious seconds from your final race-time.

Once you graduate (the WRC Academy is optional, but highly recommended if only to get a feel for the gameplay), you can then embark on your journey into the unbelievably in-depth ‘Road to the WRC’ (Career) mode, a unique feature of WRC, on top of traditional time attack and single rally races you would expect to see in other games. Road to the WRC, given the fact that Black Bean landed ownership of the lucrative World Rally Championship license, has the official scoop on the rally racing sport. It follows the official WRC calendar as you see out the season, driving in a range of locations around the world. These settings are hardly what you’d call exotic, due to the fact the sport seeks out the most challenging off-road tracks they can find, so expect to be racing everywhere, from Wales to New Zealand to Spain over plenty of different types of race course. The mode gives a huge amount of play time, with your rally career starting as a Junior until you progress enough to enter the big league of the WRC by earning the elusive contracts with official teams. In-between races there are a whole host of other detailed settings to indulge in. From the customisation options to just repairing the vehicle if it got a bit beaten up in a race, they all add to the authenticity of the career and provide a decent level of depth. 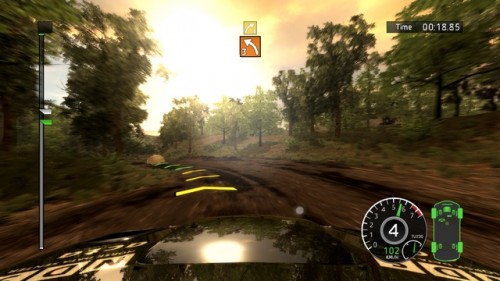 There are also multiplayer options included in the game, both Xbox Live and Local for those who want to put the pedal to the metal and human opponents. The Xbox Live settings are nicely done, with simple interfaces to operate in the lobbies, and from then on it’s a standard race. As WRC is one of the more serious rally games, ghosts are used of your rivals, rather than the physical body work of the car. As a result of this, there is no ramming and shunting during the course of the race. While the more serious rally gamers will appreciate this choice made by the developers, it alienates the more casual gamer, as it loses the excitement that comes with the physicality of barging your way into pole position. This revelation particularly negatively affected the local multiplayer options. You play in what is know as ‘Hot Seat Mode’ which in other words, is turn-based play. This is disappointing as it loses all the thrill of racing simultaneously, and in all honesty, it can’t have been that hard to implement split-screen play, unless of course it only missed out because it would have ruined the frame-rate.

All in all, WRC FIA World Rally Championship is a fantastic game which utilises it’s ownership of the official license to the fullest extent. It is an example of a great ’core rally racing game, a style which hasn’t been seen since the last ‘real’ Colin McRae game. It can be a little forgiving at times, which more serious players might not appreciate, but it still keeps it in the running as a game for more casual players too, and there’s a great amount of difficulty available, with a slider to precisely control the level of the AI. As a single-player game, it promises a lot of game time through the Career alone: it’s lengthy and detailed. Multiplayer isn’t bad and while it loses some casual appeal due to the ghost opponents and therefore no collisions, it still has a nice level of competition. The same cannot be said for the local multiplayer, which loses it’s thrill due to the turned-based style of play in place of simultaneous racing, rendering it unenaging. However, this is the only substantial negative factor in the game, and anyone looking for a rally game should look no further, as this is the best rally game released for years.