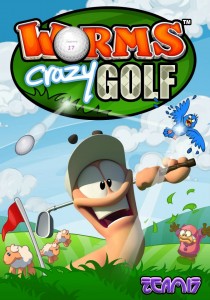 At first glance, Worms: Crazy Golf is an odd concept. At second glance, it makes sense: the mechanics of traditional 2D Worms gameplay actually line up quite well with the mechanics of golf.

At third glance, it gets weird again.

There’s no denying that Crazy Golf is an interesting departure from the Worms series, which could reasonably be accused of milking the formula, judging by the sheer number of very similar Worms games that are being pumped out across every gaming platform known to mankind.

A change in the formula is a welcome addition, and Crazy Golf is in itself quite a unique game. It takes a while to hit its stride, and by then, it may have lost the attention of the less dedicated, but stick it out through the slow start, and you’ll be rewarded with a fun spin on both genres. 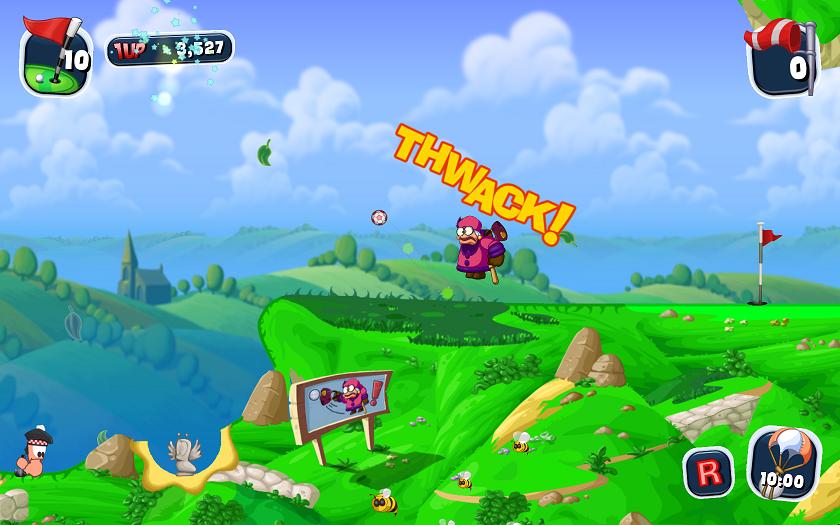 The Worms series has done spinoffs before, but none are as closely aligned with the mechanics of the normal games as Crazy Golf.

As you’d expect, gameplay is essentially golf: get your ball to the hole in as few shots as possible. But the Worms characters and mechanics spruce things up a bit, with recognizable obstacles lining each course. There’s a reliance on judging the angle, power and trajectory of your shot, and how the ball will react to the geometry of the level, so it seems to have more in common with mini golf.

The combo brings something new to each genre in the mashup: the Worms brand brings some much appreciated life and character to golf, but golf brings some linearity and structure to Worms. The result is a game with the look and feel of classic 2D Worms games, but with a more relaxed pace, a tighter level structure and a more specific challenge.

Play has you teeing off across four 18-hole courses, with intent to sink the ball on par or under, which unlocks the next hole. Using the Worms methods of aiming, powering up and releasing, your ball is launched into the course, bouncing off walls and other worms, avoiding water, and collecting coins and crates. The mouse can be used to apply spin to a ball while in the air, to dictate which direction it travels after landing, a vital function in later courses.

But of course it can’t be that easy. Between the tee-off and the green lie environments full of obstacles and characters. The nice thing is that these hurdles aren’t inherently good or bad, but vary in helpfulness depending on the situation. For example, land a ball on a molehill and the resident will yoink it, tunnel away and reposition it elsewhere; an advantage in some situations, a necessity in others, an absolute pain at other times. Sheep dot the landscape, and can conveniently give your ball some extra bounce, but will inconveniently eat it, if it lands near them. 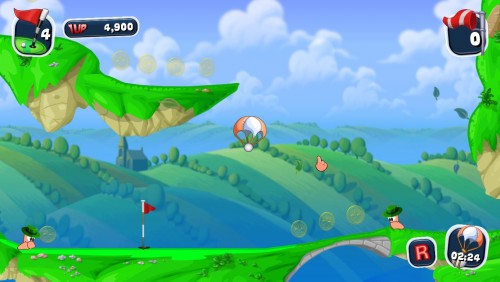 Traversing these environments calls for a bit of outside help too, so players have access to a variety of utilities to move their ball around. Cheating, they call it in some circles. Before each shot, you can select one utility to equip for that shot, changing it only between swings. Triggered by the spacebar at any point during the ball’s travels, utilities can mean all the difference between a birdie and a bogey, and perhaps add the Wormiest twist on golf that the game has to offer.

The parachute will greatly low your ball’s descent, and applying spin while it drifts can let you move almost horizontally through the air, crossing a huge space. Heavy ball will cause your ball to plummet directly downwards on triggering, which can be very useful for landing on a specific spot or dropping straight onto the green if you’re more likely to sail over it.

Later in the game, when all or most of these utilities are unlocked, Crazy Golf is at its most enjoyable when you must decide which to use, how and when. But it takes ages to unlock the more useful utilities, and even longer for them to play an important role. Being fairly unique, the game understandably needs to take a little time to explain itself, but the first course, Britannia, acts as an extended tutorial, dragging along by the end. Later courses, like the Pirate Cavern, Graveyard and the recent DLC Carnival course, redeem this by applying more focus and usefulness to the utilities. 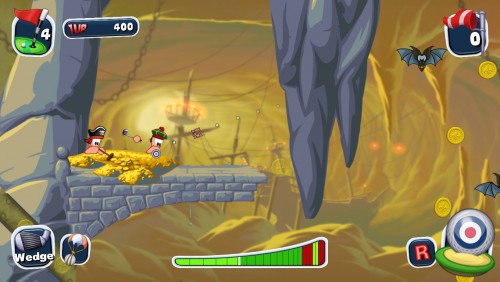 Each hole has supposed replay value by placing arbitrary collectables around, but they kind of go against the grain of the game. Golf is about getting to the end as quickly as possible. Collectable coins do not feature in either Worms or golf – rather, coins are an unwelcome video game cliché that disrupt the flow of the game.

It’s been said that a hole-in-one is possible on every hole in the game, and aiming for these is a more fitting method of adding replayability. There are often multiple paths to get to the green, depending on which utility you’d prefer to employ, and replaying holes to find the best way to the elusive one-shot sink can be very rewarding.

Customization is a staple of the Worms franchise, but in Crazy Golf this aspect is somewhat stripped back. You can unlock better clubs, balls adorned with different patterns, hats, and speechbanks, but overall, customizing your worm feels much less important, and less fun, than it usually is.

Worms has a distinctive style, and that’s not lost on Crazy Golf. Each course has a great theme, and it’s apparent that a lot of thought has gone into personalizing the obstacles and surface types to fit each theme. Bunkers in Britannia are just sand pits, but in Pirate Cavern they become piles of gold. In the Graveyard the “Rough” patches are bones, and cannons, which launch your ball further, become zombie arms with blunderbusses, waving out of open coffins. It all looks fantastic. 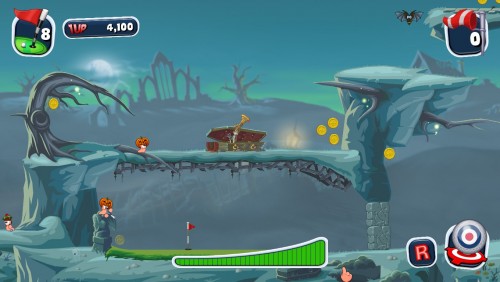 Unfortunately, the worms themselves seem a little less expressive than they are in Reloaded and Ultimate Mayhem. It’s hard to say why exactly: they still dance when they sink the ball, or scowl at you if you go over par, but it feels less marked. Perhaps we’re just spoiled in the other Worms games though – here they still have much more personality than the latest hardened marine.

Soundwise, there’s not much to report. The music gets a little exhausted after 18 holes of the same tune, but it’s so low-key that you’ll barely notice it’s there. There’s even less variety in the speechbanks, but with fewer things that need saying in golf, there’s not much need for more speech sets, or more dialogue in each one.

Crazy Golf presents an interesting departure from regular Worms fare, but it does drag a bit, particularly during the crucial opening sections. Once you master the basics, unlock some of the quirkier tools and encounter some of the smarter level design, the game becomes pretty fun and provides a unique experience. It just requires a bit more of a commitment than many will allow.