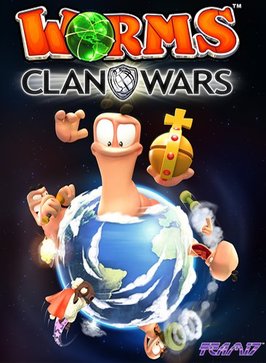 Overview
In this modern day and age where high octane action and graphical fidelity are so important in gaming, I can’t help but stifle a laugh at the fact that a game that is essentially squeaky 2D sprites shooting bazookas at each other still manages to remain such a powerful gaming  icon. In fact, there are very few games that command the same level of nostalgic fun as the Worms franchise. Armageddon is arguably one of the most enjoyable games to ever grace the PC platform and as Worms tries to remain relevant in a scene that is being constantly redefined by an array of hot new indie titles, the question on everyone’s lips is, “Can this new iteration live up to its peak that has not been reached since Armageddon in 1999?” 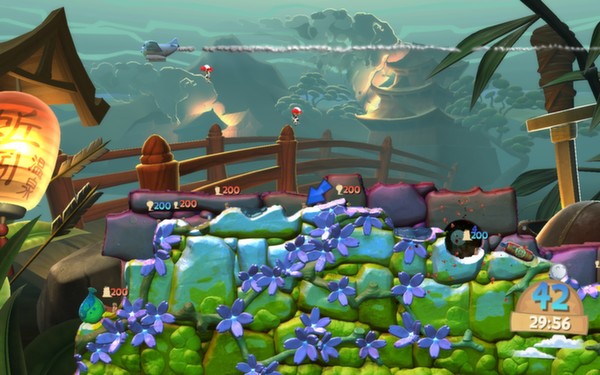 Story
Worms has never really been a game with a particularly engaging story; in fact some of the best games in the Worms Franchise have not even featured a story mode at all! True to form, the actual plot in Worms Clan Wars is minimal. Instead, the 25 single player missions teach the player how to employ their entire wide arsenal of weird and wonderful weapons to their most destructive capacity. These missions come in a variety of forms including tactical races using ninja ropes which still feature the new, more realistic physics introduced in Revolution, as well as the standard worm-related carnage we all know and love. The game also features an extra 10 “Worms Ops” missions that take a more time trial style and once again, are fun despite their complete lack of plot or direction.

Gameplay
Not to take away from the story mode which is indeed a great deal of fun, but when we take a look at the multiplayer aspect of Worms it makes everything else seem completely irrelevant. As with all the great Worms games, there is nothing more fun than gearing out your own little team of worms and sending them out to meet their makers in a barrage of exploding sheep and old ladies. As a child, I used to spend more time actually designing my team than fighting with them, and now that is even truer because there are so many more features to choose from. Not only are there the 4 different types of worms now, but the amount of customization is mindboggling, and it is only going to get bigger with the new implementation of the Steam workshop. This will allow players to submit their own hats and other customizable features, which as Team Fortress 2 has shown makes for a lot of strange and awesome designs. 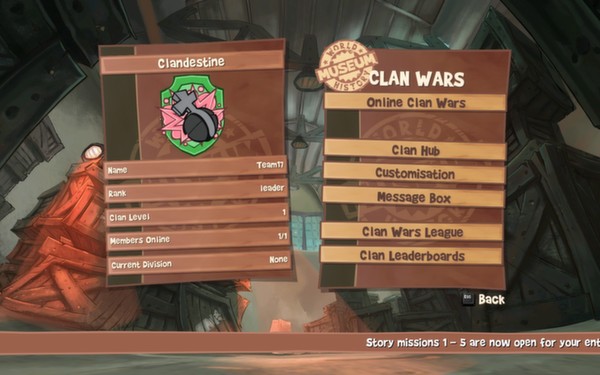 Compared to previous Worms games this iteration definitely has the most complex battle system of them all. Sure, you can just charge in gung-ho with 4 fat, tanky worms and hope for the best, but now that you have things like water falling as well as the new unfamiliar weapons to worry about, there is a lot of room for shrewd tactical play. What is wonderful about Worms as a whole though is that you can still do reasonably well in a game by not overly trying and dumping airstrike after airstrike of cows onto your opponents and prodding them off of precarious ledges into the watery depths below. Worms Clan Wars somehow manages to add more tactical elements while retaining the integral core of stupid fun that made the series so popular in the first place and that is its greatest triumph.

As far as the new clan feature is concerned I like the concept behind it, but I can’t really see people investing in it as heavily as Team 17 seems to think they will. The cool added element of customization in the form of clan emblems, ranks, etc is definitely fun, but I am skeptical as to how many people will play Worms on a regular basis because of it. To be fair to Team 17 though they have given it their best shot and to be honest if the integration of smart phones to record stats and the possibility of building clans of up to 120 people  doesn’t hold people’s interest, then it just isn’t meant to be. Worms Clan Wars is definitely not in the same league as Guild Wars 2 which works off of a similar group based premise and Guild Wars 2 was never quite the phenomenal success that it was hyped up to be. Worms is great, but you’re never going to get people playing it for extended periods of time because it has the depth of a puddle. It isn’t like a MOBA where each hero/champion has builds and skills to learn. Worms is most fun when it is a party game, and trying to make it competitive on a large scale will not be successful I fear. 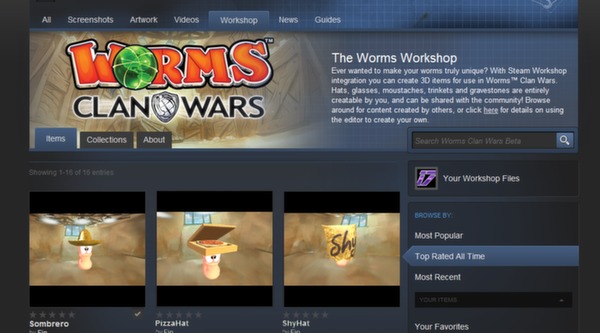 Visuals/Audio
I don’t think I am wrong in saying that Worms is never going to be the most aesthetically pleasing game on the market, but it has certainly come a long way since the blocky 2-D sprites of the late 90’s. Nowadays the maps are vibrant, dynamic landscapes, far bigger and more interactive than they used to be. In the backgrounds CG objects are now being utilized which is a huge improvement on the pixelated starry sky that featured in older games. But most notably of all, the weapons all have their own unique animations now and the shots actually feel like they have some weight behind them which greatly adds to the overall feel of the game. Saying that Clan Wars is a step up from Revolution graphically though could only be justified using finicky details that barely matter. If all you want is a Worms game prettier than the classic ones then I would recommend just buying Revolution when it falls in price upon Clan Wars’ release.

I was disappointed to see that Clan Wars had a similar problem to Revolution where it wouldn’t run on certain integrated graphics cards despite saying it would in the system specs. Disappointing that Team 17 didn’t listen to customer feedback about that issue. So, if you game on a laptop I would do some research before buying this game.

As always your little wormy soldiers will have you pulling your hair out with their helium-charged squeals, but by now I’m sure anyone who has played a Worms game is used to that. Conversely, the background music is calming and fits each of the maps perfectly. As a whole package the game is bright, colourful, and chirpy and the fact that the very nature of the game means that you can pick it up and put it down so easily makes it a wonderful game to blow off some steam between shifts. 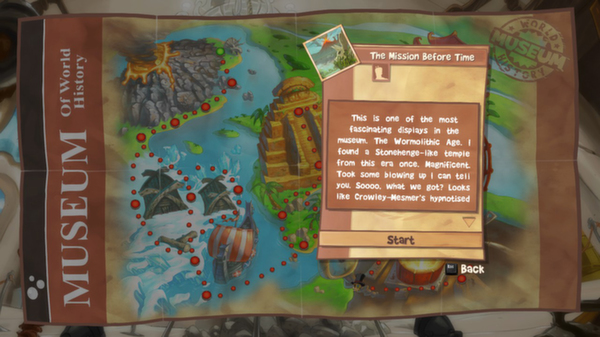 Overall
To answer our earlier question, Worms Clan Wars is about as close to Armageddon as a Worms game has come since. In ways it is far superior, for instance the sleeker graphics, the clan-based multiplayer, and the absolutely endless customization possibilities. Unfortunately, I can’t see the clan system taking off, and whether the Steam workshop will produce much is for the community to decide. Everything new in the game is a good idea and I hope for the franchise’s sake that it does somehow amass a following, but if multiplayer isn’t your thing it is essentially Revolution with a few extra bells and whistles.