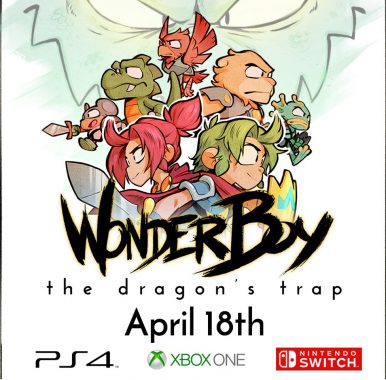 There is always an argument about older games. If you like a little niche, offbeat title from days of yore and its not some top-ten list dwelling legacy game, you’re actually remembering that said experience blindly as nostalgia is jading your outlook. While I completely disagree with those sentiments, I can say I did find myself lucky enough to experience Wonder Boy: The Dragon’s Trap for the first time ever, with developers of old and new coming together to bring back what is possibly one of the most overlooked titles of the Master System catalog. For those unfamiliar (which I mostly was, going in), this release is a full blown remake of Wonder Boy III: The Dragon’s Trap, a game that launched eighteen years ago to decent critical praise and moderate fanfare. With a hand-drawn art style, new music, and a lot of love, Lizardcube are finally ready to crack this beast out of its shell. Does this remake modernize itself to appeal to all, or is this a game built only for those loyal to their past? Let’s find out. 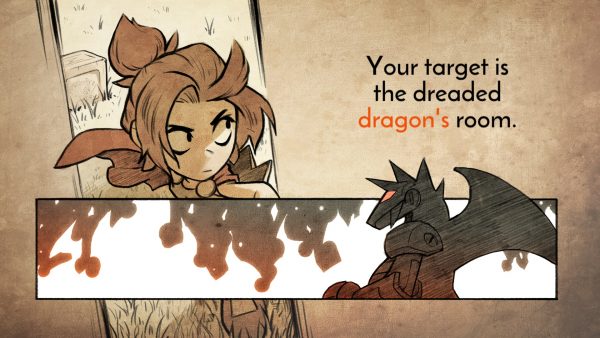 Wonder Boy: The Dragon’s Trap has a very fairy tale atmosphere, and starts out with the player conquering a mechanical dragon. After doing so as Wonder Boy (or girl, if you so choose), we then are whipped into a sudden adventure as the player is cursed – transforming into Lizard-Man. To break this curse, it is up to you to take your new abilities and body from stage to stage as you hunt down other dragons, transform into new bodies, and eventually remove the disguise once and for all. Yep, it is simple – but is effective for the sake of progression. A lot of NPCs add a great deal of flavor as well, as there are usually locals in many areas to converse with or buy items from – which brings a bit of quirk and character to the game. 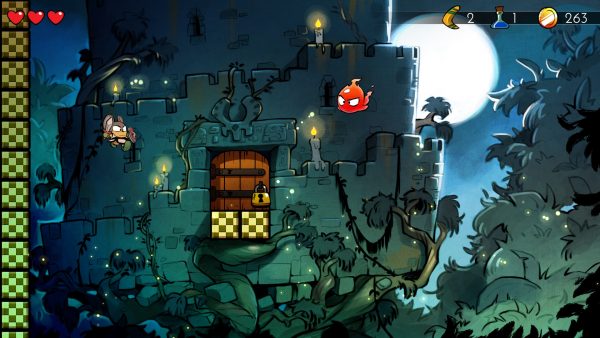 The gameplay of The Dragon’s Trap really depends on what transformed state you’re currently in. Lizard-Man is able to throw fireballs at a short range in order to defeat random enemies. Pirahna-Man specializes in swimming, Hawk-Man flies, and Mouse-Man can climb specific platforms in order to progress. There are several of these transformations and each feature their own perks and challenges – based on the level the player is currently on. For instance, Lizard-Man is sort of weak, but his fireball can put a stop to an upcoming enemy quickly. Every character skin has a bit of its own balance, and that is where the charm of the game lies. 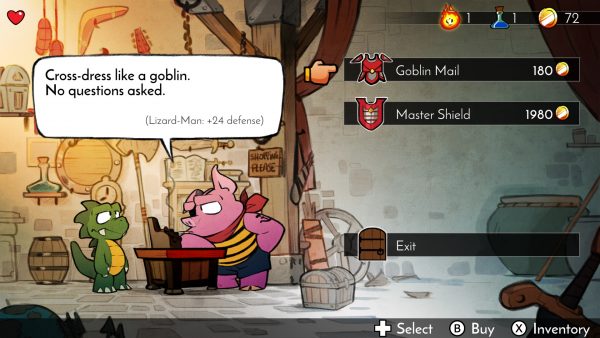 After getting out of the first level, the world is literally yours to explore. Every path you take comes off as non-linear, meaning that if you want to go a specific way – there will not be anything to stop you other than the occasional puzzle or locked door. With keys scattered about, the player will have to find gold and keys in order to get through many areas, so they can buy upgrades, weapons, and so on to give them the edge as they work to each themed level’s Dragon. Even though this is a platformer, it is not a game where you just blow through and jump occasionally in order to succeed. No, no. I quickly learned that this hero controls kind of like a lead pipe. Even though he is animated well, the game manages to keep that same feel that I remember so strongly from the first Wonder Boy and Alex Kidd, where jumping is an act of precision and range and hit boxes require more attention than ever before due to the small room for error. I am not saying this is a bad thing by any means, but the weighted platforming and general movement will not be for everyone. 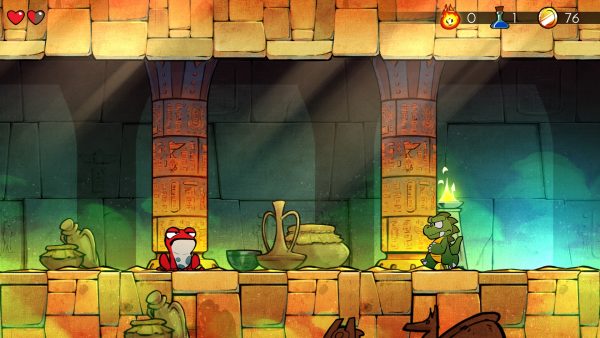 Personally, the gameplay here is why I feel the Master System has such a small following compared to the Sega Genesis and Super Nintendo. Platforming is better with speed, and no one wants to bring a sword that feels like a dagger to a fight. I literally had so much trouble with hitboxes as my impatience was on fully display during the opening hour of the game. As I played however, I got over that learning curve and started to appreciate gameplay that was actually far more strategical and layered than I originally perceived it as. There is such an incredible little world here to explore and those who don’t allow themselves to fully indulge due to that rusty feel that the game first exudes will be doing themselves a huge disservice. Now, if you played Alex Kidd and Wonder Boy back in the day on a regular basis – you will be right at home as Lizardcube nailed bring that feel to modern platforms.

Wonder Boy: The Dragon’s Trap has an amazing art style. In fact, that was the first thing I truly fell in love with. The characters are very well animated, with little details bringing this old adventure into newer times. The animations of the world itself are equally impressive as well, as these environments feel very alive with quirk and color. Those who are into nifty features will also be thrilled, as you can throw the game back into 8-bit with the touch of a button, which adds a great amount of replay value even after the adventure comes to a close. 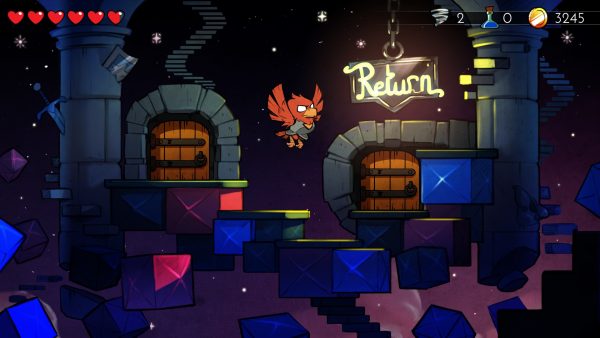 The soundtrack is also pretty awesome. These tunes definitely capture their original platform, but still sound fluid and modern. Michael Geyre does a great job of bringing these old melodies to life, and even though I can say some melodies are not as memorable as others – there is definitely a great deal of charm added for those looking to crunch into a very retro experience. The sound effects are also special in their own right as well – cementing the tribute that our little hero pays to his predecessor with some familiar chimes.

Wonder Boy: The Dragon’s Trap is a terrific remake, as it has rebuilt one little title into something that looks new, but still keeps its old mechanics close in order to remain true to its origins. Sure, that could be a curse for some titles, but Wonder Boy doesn’t really try to appeal to anyone other than those who want to get a fresh take on a look back in history. With a ton of content, easter eggs, and satisfying – yet not completely accessible to everyone stylings of days past, this little romp is a monster-filled blast from the past that is sure to add a bite of culture to any console it lands on.

A Beloved Franchise Returns with a Facelift
8