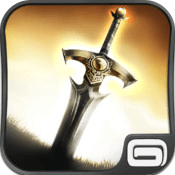 Wild Blood is Gameloft’s first game on the legendary Unreal Engine. A console quality hack ‘n slash set in on a dark twist to the tale of King Arthur and his Knights of the Round Table with lofty expectations, the game combines some FPS mainstays and influences from Devil May Cry and other hack ‘n slash classics. Does Wild Blood have what it takes to start a brand new hit hack ‘n slash franchise for the iOS?

Wild Blood stars the knight Sir Lancelot on his return to Albion. He and King Arthur’s wife Guinevere have had a lengthy affair and King Arthur has discovered his wife’s infidelity. Wracked with grief, Arthur makes a deal with his sister, the sorceress Morgana who promptly opens the gates of hell and wreaks havoc upon Albion as the demons enslave the population. Sir Lancelot returns to Albion to close the gates of hell and bring peace back to Albion. 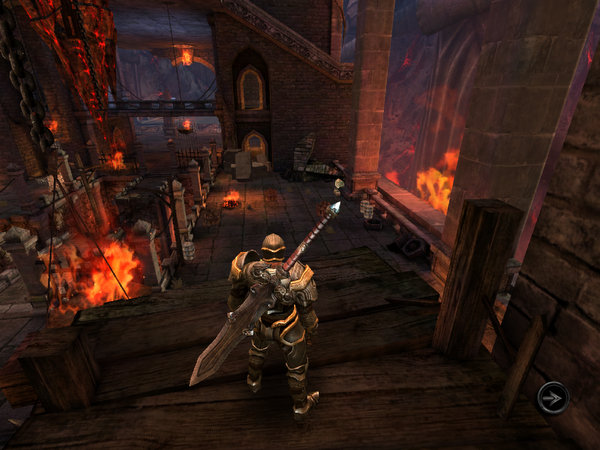 The plot seems to provide some background noise to provide a little reasoning for the hacking and slashing action. Unfortunately, character development is lacking and our heroes seem to be rather one dimensional for the most part. Some parts, such as the random archangel boss, left me rather confused without much explanation. I could help sitting at my iPad thinking “Hang on, I thought I was fighting hell spawn…” Although the hack ‘n slash genre is not known for its particularly epic stories, games such as Dante’s Inferno and the Devil May Cry series have raised the bar for the genre.

Wild Blood is a hack ‘n slash game that looks torn right out of a console. Players have all the toys and abilities that are familiar to the genre including a light and heavy weapon, a ranged weapon, and potions. Special abilities are fueled by mana that regenerate as players use regular attacks on the enemies. Enemies are plenty and diverse. Each enemy has their own particular weaknesses and tactics to best deal with them that provides a welcomed sense of variety. 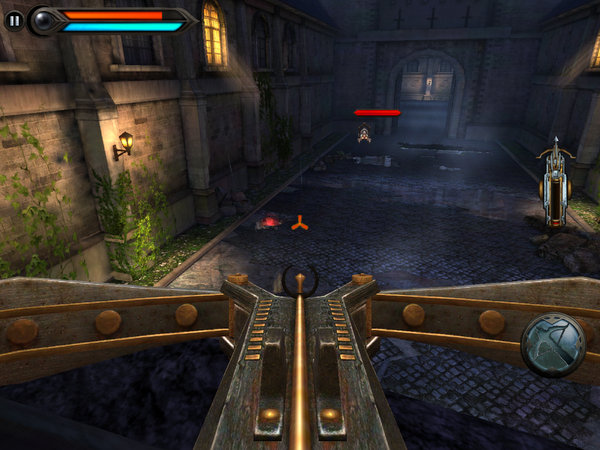 The upgrade system is simple to understand but provide plenty of options to fit anybody’s play style. I appreciated the fact there are three different special elemental attacks for each weapon, but players are only able to choose two special attacks for each weapon. I also really enjoyed the puzzle chests. To open some of the chests in the level, players are given a Rush Hour type puzzle game where they must move a key block to a certain zone on the board to unlock the chest. These were a great change of pace and made great use of the touch screen. I also appreciated the FPS mainstay of mounted turret sequences. This brought much needed pauses in the hack ‘n slash action.

Gameloft stuck to its familiar control set and kept with a control scheme found in many of their games. A virtual joystick is on the left side of the screen moves the character, a variety of action buttons is on the right hand side of the screen, and players can swipe the screen to move the camera around. For the most part the controls feel ported from the console. For regular action, players use the virtual game pad with the odd swipe puzzles and opening of doors that make better use of the touch screen controls. There are the traditional turret shooting sequences that is a staple of the FPS genre that is also controlled by the virtual joystick. For the most part, the possibilities touch screen controls of the iPad are largely ignored. Players are stuck with a frustratingly inaccurate and clunky control scheme for the multitudes of turret sequences. The regular hack ‘n slash controls are only marginally better. The staple movement of dodging in a particular direction is extremely finicky. I found I was only able to execute a successful roll when the joystick was not causing Sir Lancelot to move in any particular direction. When avoiding the use of the action button and focusing solely on attacking and moving from creature to creature, the controls were flawless. The game compensated for the inaccurate joystick by automatically sticky targeting the closest enemy after one dies. This was a tremendous help. 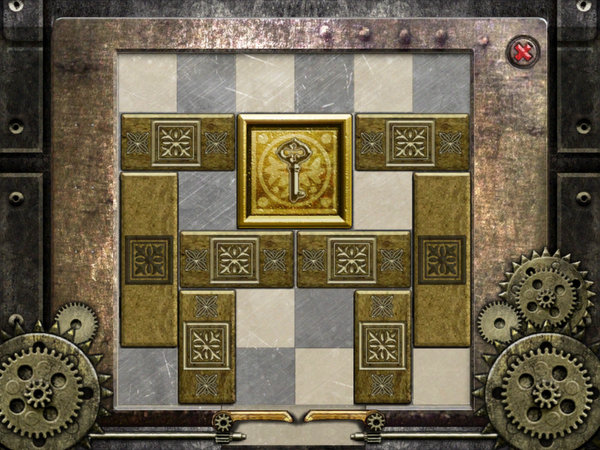 The difficulty of the game is a funny thing. For the most part, the game was just difficult enough to be challenging without hair pulling diff
icult. Most of the difficulty suddenly hit by chapter five due to the controls. Suddenly it became apparent that the inaccurate controls caused getting past spike traps that happily dealt almost quarter of a health bar worth of damage to become a small mini boss on its own right. Bosses began to hit mercilessly with gigantic health pools, the lousy dodge controls made the game unnecessarily difficult.

The visual quality in Wild Blood is strong for the most part. On one hand, the game is beautiful. The animations transition into each other with a buttery smoothness. The visual design is impressive, enemies are visually distinguishable and the graphics are top notch. The skinning and modelling are well done with only a little bit of aliasing to be found. However, it seems rather obvious that this is Gameloft’s first game on the Unreal Engine. I ran the game on the top of the line new iPad with the Retina display. There are some extremely noticeable FPS drops interspersed in the game. There are moments when the action becomes too intense on the screen that the game drops a few frames to cause a sudden visual jolt. These problems ruin an almost perfect visual experience. 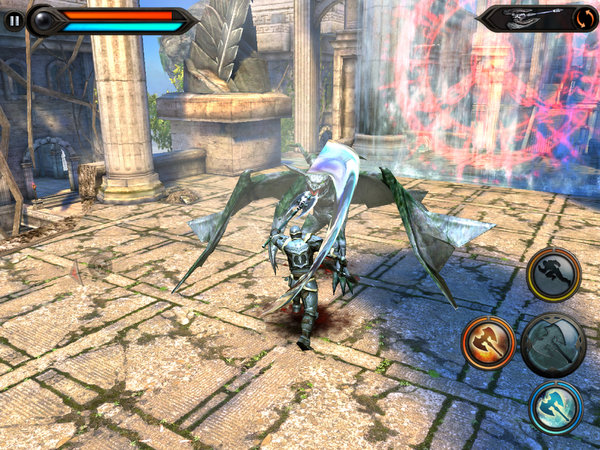 Wild Blood brings a great soundtrack and strong sound effects to the table. However, the voice acting is a mixed bag. The main characters are all well voice acted, especially for the iOS platform. However, minor characters like Merlin have a marked difference in acting quality. Worst of all, the hostages are some of the most irritating voices in the game. There are two different types of hostages, one female and one male. Each seems to have only two lines.

I found the male hostage to be the most irritating of the pair, but both hostages repeat the same few lines over and over with only a few second pauses between lines until you free them. Although I am aware this was most likely done to help players locate hostages hidden in alternate paths, the same two or three lines become old very quickly. On the other hand, the soundtrack is extremely pleasant to listen to and the sound effects are well done. 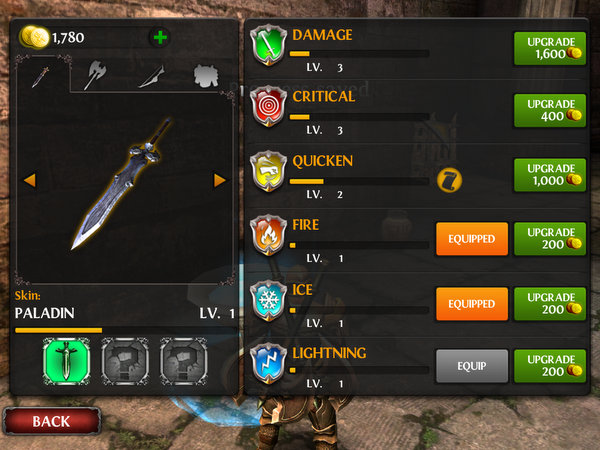 Wild Blood feels like a hack ‘n slash game designed for the console and ported onto iOS as a last minute decision. Some of the touch screen controls feel like afterthoughts. Places where the best of touch screen controls could shine, players are stuck with a clumsy virtual joy stick. Although the plot is a tad thin, I find it no thinner than the average hack ‘n slash. An epic story this game is not, but it provides just enough reason to slaughter hundreds of demons without mercy. Visually, Wild Blood is an impressive display making great use of the new iPad’s Retina Display. However, there are some obvious FPS drops at some points that detract from the visual quality of the game. Considering the premium price of $6.99, Wild Blood is by far cheaper than a similar quality console game, but priced as a premium title on the iPad, it is hard to recommend all iOS gamers to brave Wild Blood’s troubling control scheme. If you are a diehard hack ‘n slash console gamer that wants to get straight to business in killing or bring the experience onto their mobile device, then by all means purchase Wild Blood. But Wild Blood will not win any new converts to the genre by any means.