Who’s That Flying, created by MediaTonic and published by Kalypso Media through the steam digital distribution system, follows the Trial of the ‘Guardian of Earth’ as he must prove his innocence in a hearing as held by the Galactic Council of Justice. The trial itself is a recount of events, as told Guardian of Earths perspective, from days prior concerning the invasion of the Doom Beasts. As the game progresses you find out the reason behind the Doom Beasts invasion as well as why they were able to penetrate so far into the Earth before being noticed by the Guardian of Earth.

The Story of Who’s That Flying is quite an entertaining experience. The game follows the Trial of the Guardian of Earth as held by the Galactic Council of Justice in order to ascertain as to whether the Doom Beast invasion of the Earth was indeed the fault of the Guardian of Earth. The Council plugs a device into the defendant in order to show his memories as he recounts the events leading up to the trial. 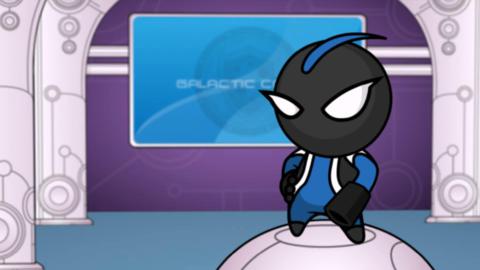 The Earth Guardian strikes a Pose.

The trial focuses on four integral parts to the invasion, the cities of New York, Tokyo, Mexico and Moscow. The Guardian of Earth recounts the happenings of these places in order to clear his name. Each part of the trial is connected to a 3 act level for players to complete.

Who’s That Flying utilises a basic graphical design with the game being completely two dimensional. Everything in the game is run on a two-dimensional plane, from the characters to the backgrounds and enemies. This is, however, not to the detriment of the game as the style suits the game perfectly and is likely to not have the same feel if it was built in a three-dimensional plane.

The character and enemy design, while basic, are well executed and each unit has their own unique feel while not being out of place. The enemies range from simple black coloured puff ball things to really big wormy looking things. The main cast all have a similar look to them so that you can easily tell that they are all a part of the same organisation while all having their own unique look to set them apart, like how Earths colours are primarily a blue theme and Mars has a more red theme going on. 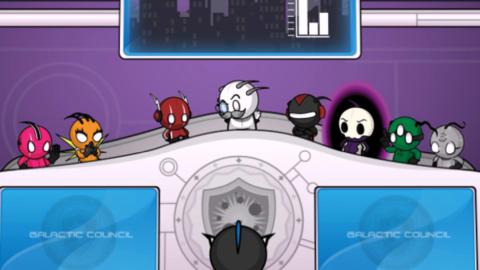 Across the game the player will visit four different cities in order to save them from the Doom Beasts. Each city appears similarly in the game as the background of the area while retaining their own unique identifiers. A cool thing that can be observed is that, as the city takes damage from oncoming Doom Beasts, the city in the background will become more and more wrecked as the damage progresses. While in the early stages of damage the city is near indistinguishable from having taken no damage whereas the more damage it takes the more and more obvious it is that the city is being damaged. 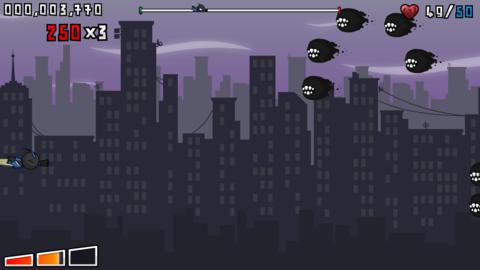 City with high amounts of health. 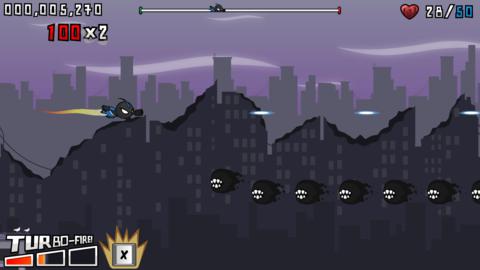 City with low amounts of health.

The heroes and enemies attacks are quite basic, with the enemies attacks consisting of mostly ramming into the player or shooting green blobs at the player while the heroes attacks are mainly a barrage of laser bolts hurled forth primarily from his arm cannon. The heroes attacks do vary when you get the opportunity to use a special attack and range from a much faster firing barrage of laser bolts to a singular straight firing beam and then to a singular straight firing huge beam. There is also a melee attack that can be used on the smaller enemies which involves you flying into them and ripping them apart, though there’s no blood so it stays with the artistic design.

Overall I found the graphics quite enjoyable, it is quite refreshing to see a game that doesn’t try to be an ultra-realistic gore-fest or have an art style that doesn’t quite fit the feel of the game. More stylised games please developers. Also, as an aside, I found that there was a fair amount of vertical-tearing in the game with no V-sync option to fix it. It’s not game breaking but gaming rigs like mine should expect it.

The sound in this game is quite amazing. Each zone has it’s own theme which are a mixture of the Earth Guardians theme with a more ‘traditional’ piece from that city.

The City of New York has a more patriotic theme which (I find) is quite reminiscent to the classic StarFox64 while sounding distinctly American and pretty awesome. While New Yorks theme is quite patriotic, the Tokyo City theme is more of a Para-Para (fast-paced pop style music from japan) version of the Earth Guardians theme; it’s also my personal favorite from the game. Mexico city has a spanish-folk kind of feel which is quite entertaining to listen to, players who enjoyed the Gerudo Valley theme in Ocarina of Time will quite enjoy this piece. The final city in the game, Moscow, uses a song that anybody growing up with Tetris may know as the song from ‘Tetris Type A’. It is actually a Russian folk song by the name of ‘Korobeiniki’. Although the player must battle through cities in order to save them, the final zone of the game is set in space and this means that it gets it’s own theme. The space theme is slightly more rocking than the other theme’s and reminds me somewhat of the first level of the Sega side-scrolling shooter; Sol-Deace.

The sound effects of this game are simple but do their jobs well. From the heroes differing weapon noises (depending on which power he has activated) to the enemies sounds and weapons they fit quite well and are never confusing to the player and best of all, they’re not annoying even if they repeated across the entire game (or for some players, like me who keep the spacebar depressed, from the first second to the last second of each level, never relenting, never stopping).

The voice acting in this game is quite simple with the language spoken by the main characters being in a made-up language more closely resembling grunts or the language used by the Sims than anything intelligible. Not that this is a negative, not at all! This is a huge positive in the game as it follows the cartoony and simplistic feel of the game more closely. It’s kind of reminiscent of sticking StarFox64 language mode into Lylatian as opposed to English, only it’s much more entertaining and fits the game much better.

Who’s That Flying is a simple side-scrolling shooter with the player taking the left hand side of the screen and facing to the right with the enemies coming in from the right and heading left. Basically, The Earth Guardian must stop the Doom Beasts from getting past him and damaging the city. In lieu of health, the player has to manage the damage to the city. This means that the Earth Guardian can get hit as much as you want him to and he will not die, but should too many (50 is the limit) Doom Beasts get through the game will be over and you will have to try again or quit.

While you have to prevent all 50 Doom Beasts from breaking through and destroying the city, it is more beneficial for you to let none through as this will ensure your powerups appear more frequently (from what I could tell) so you can better terminate the enemies. The weapon powerups are not the the only reason to keep the cities health up, players will also receive a medal at the end of a level depending on how well they defended the city, the less enemies that break through, the better the medal you receive at the end. 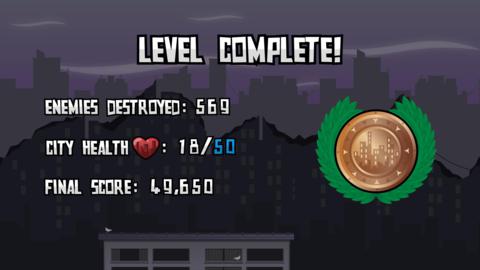 At the end of each zone comes a boss. In boss fights it’s essentially you versus the clock and you versus the boss. That’s not to say that you can’t have your city lose health during a boss fight, because you can, as mooks tend to spawn during intervals of the battle and will try to overcome you to try and wreak havoc on the city. The bosses will generally try and hit you with paralytic attacks to try and slow you down so that; either the mooks overtake you and engage with the city, or that your timer runs out and forces you to retry the level or quit.

The game offers three modes for players to play through; Story Mode, Infinite Mode and Challenge mode. Story mode is the mode that allows players to play through the games story which is split into 5 chapters, one for each city and then the final chapter, which detail different testimonies of the Earth Guardians trial. Infinite mode is pretty much a ‘play until you die’ mode, which is to say that its more of a time-trial and score busting mode, which is quite fun to play through. Infinite mode also carries a scoreboard which makes it highly competitive and, well, who doesn’t like to have their name appear in that number one spot in a game? Lastly there’s challenge mode. In this mode the developers have players play through pre-made challenges within the game. This game modes title is not just a throw on name either as the challenges are quite challenging… even the first one.

Throughout the game players can unlock various pieces of ‘Evidence’ and ‘Magazines’ and the like through completing various in-game goals, like finishing a level without letting a certain number of enemies pass you and completing the challenges. There are also a fair few Steam achievements for players to unlock, for those players who like to hunt down achievements, which range from quite easy to really difficult to unlock. These unlocks should be an added challenge for all 100% completionist gamers as well as players who just want to spend 15 minutes and try to achieve something, especially with the challenge mode, it really is quite rewarding should you complete one of the challenges. 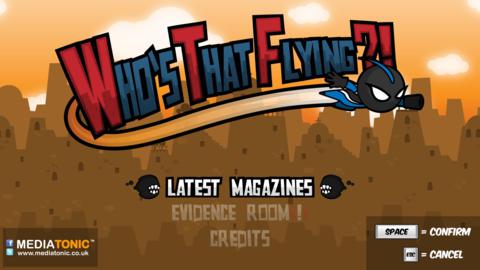 See your unlocked unlockables from the menu.

Who’s that flying is an excellent shooter with an entertaining story line and interesting art design. It provides an entertaining story with sometimes hilarious dialogue and a plot that keeps your attention. The gameplay, while simple, is quite engaging and players will often find themselves wanting to have another go to beat their previous high scores or to get the next trophy up. With plenty of unlockables and fun gametypes this game is well worth it’s price. Even if you won’t play it all the time, when you do you’ll have a blast.