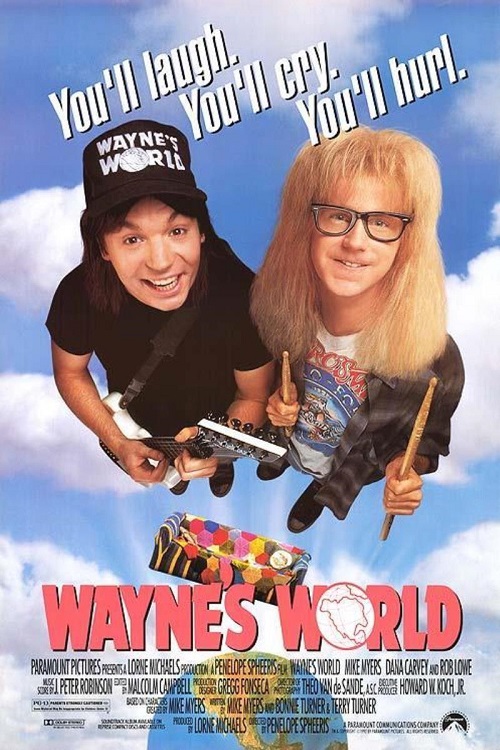 I remember first seeing Wayne’s World back in my high school days when a friend of mine wanted to show me his favourite film. I didn’t think much of it then but I have changed a lot since then and so was willing to give it another shot when the folks at In the House put on their screening of it. So I grew out my mullet, put on some stairway and sauntered on down to George St cinemas to give the film another go.

The MCs for the evening for Jason ‘Jabba’ Davis and David ‘Quinny’ Quinn In traditional In the House style a very quick and informal with cosplay competition with the winners, a couple dressed as Wayne and Stacy, walking away with speedboating tickets. The two MCs then settled in for a chat before the screening proper started and shared various bits of trivia with the audience. The most interesting tidbit I heard came from Quinny who discussed the surprisingly true basis of Stacy’s gun rack present to Wayne and how it was actually inspired a by real life incident with Myers and his ex-partner. The kicker for me was when Myers brought that ex-partner to the film premier who then proceeded to get upset about the way she was depicted in the film as “A psycho hose beast”. 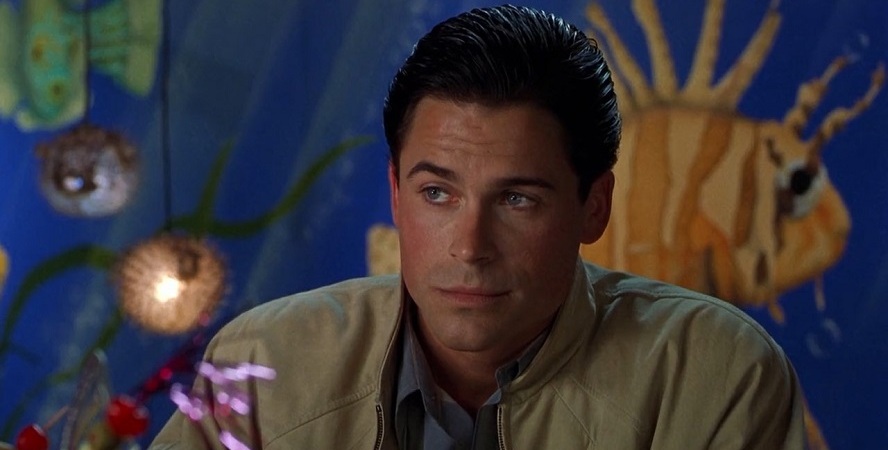 The film’s narrative follows the two hosts of a fictional public access cable tv show called Wayne’s World named Wayne (Mike Myers) and Garth (Dana Carvey). They live fairly unremarkable lives, hanging out with their friends, going to music gigs, and dreaming of the day that things finally turn their way. Through pure serendipity, they find themselves the objects of attention of a sleazy tv executive, Benjamin (Rob Lowe), who wishes to exploit their show for his own personal gain. The two hosts, star struck by the financial offer held out to them and agree to the terms of his contract without reading the fine print. Will the lure of financial success and all that comes with it get the two friends to sell out or will they be able to find a way to stop themselves from selling out completely? 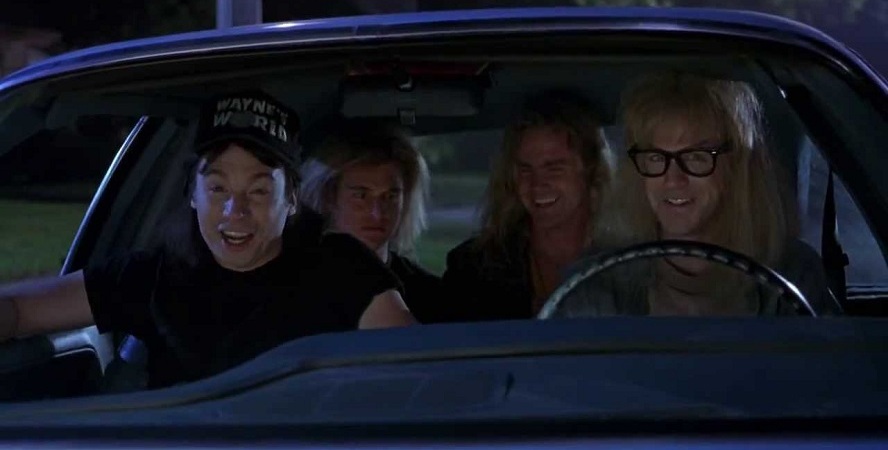 To say that this movie is self-aware is an understatement; this film has gone on a journey of self-discovery and expanded it’s apprehension of what it’s place in the world is. Characters repeatedly speak to camera in asides and comment upon the action as they break the fourth wall. The film even goes so far as to use it’s self-awareness to create some of its humour with one gag involving sponsorship and product placement featuring incredibly ironic declarations of artistic integrity. This is might become tiresome in another film, but here the characters use it in such a way that it’s charming as well as absurd.

The performances by the two leads is what carries you through the narrative of this entire film which is honestly a bit threadbare. There are a lot of scenes which don’t really lead anywhere or add anything to the main plot which may grating for some people but I’d hazard that most are willing to forgive these tangential digressions because the characters are just so damn charming. Myers’s Wayne is the more assertive of the two but has a wonderful eccentric passion for life which he almost never ceases to share with the audience. Carvey’s Garth, on the other hand, walks a careful line with his character socially awkward almost always being more cute than cringeworthy; it’s no small feat, believe you me. Together, they form a beautiful onscreen chemistry that is warm and compelling to watch. It makes me envious that I don’t have more friendships like the one that Garth and Wayne share. It’s their unbridled enthusiasm for their passions which carry the movie and have earned them a place in the hearts of so many. 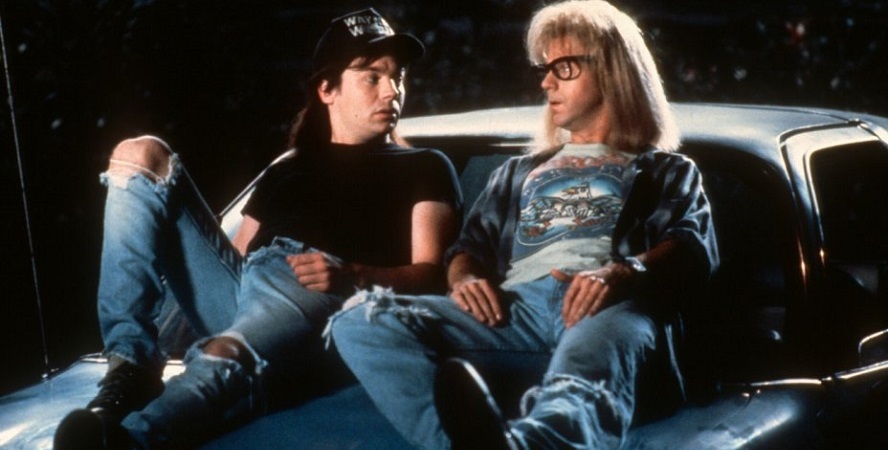 A problem I do have with the film’s writing is the romantic subplots with our characters expressing love (generally lust) to the camera. The adolescent way the film approaches this topic can be quite funny such as the pearl of wisdom between the characters that true love is when your partner is unfazed by your vomiting; an idiom which I find hilarious. Where the film falls short is where our protagonists make declarations of attraction to the camera and their intention for said object of attraction (namely Cassandra played by Tia Carrere) to “be mine”. The film plays this for laughs in the same vein as much of it’s metafictive humour but it does not change the fact that it’s there and it’s creepy. This is not the worst instance I’ve seen of this I’ve seen in a film by any stretch but I feel it may be pertinent for some of you to know ahead of time. 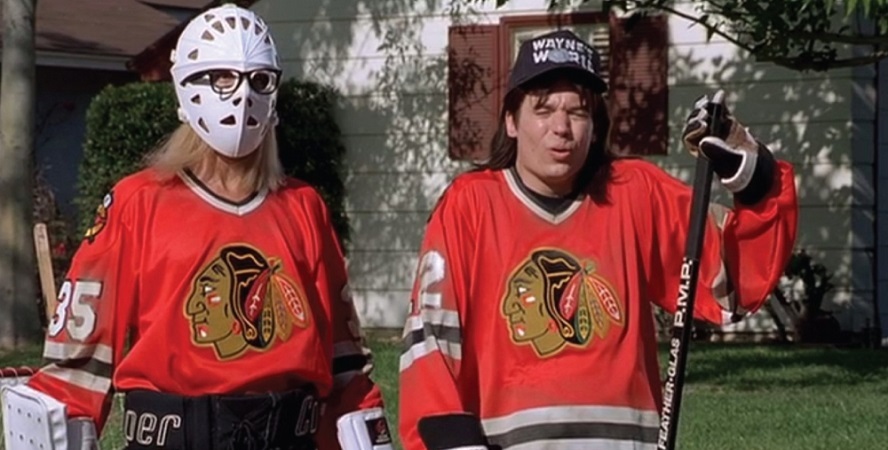 The film’s direction follows in the story’s metafictive style and approach but is otherwise not particularly remarkable. The film uses it’s nature as a film to form a large parts of its jokes which it highlights without fail at almost every turn. If a special effect or scene transition is used, it’s generally commented upon and used for comedic effect. It all fits in with the film’s self-aware charm but doesn’t really do much to change the fact that it’s camera work and cinematography is largely quite pedestrian otherwise.

For a film which ostensibly has two metalheads as its’ protagonists, the film is surprisingly sparse when it comes to the actual presence of music itself. Except for one notorious scene of the characters headbanging to Queen’s Bohemian Rhapsody, there aren’t really any particularly noteworthy musical moments which had stuck with me. That being said, there’s no real shortcoming here either; it’s just unremarkable overall. 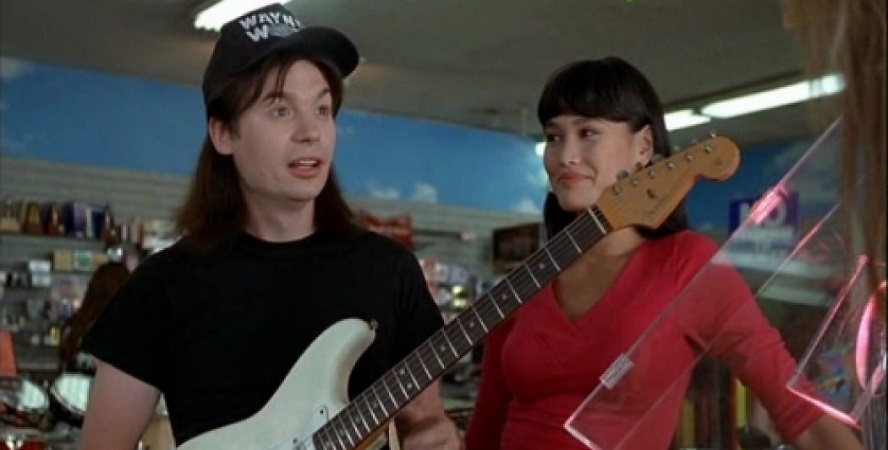 Overall, I enjoyed this film and was happy to see it up on the big screen. Our protagonists and their relationship is what makes this film such a cult classic but they still have their problems. The film extensive use of self-aware humour is joke it is able to use even with it’s visual direction without wearing the joke thin. Unfortunately, the film’s soundtrack does not maintain the unique success of it’s writing and is ultimately dull and uninteresting (with one notable headbanging exception). It’s a fun little film which was enjoyable while it lasted but I don’t see myself returning for repeat viewings any time soon.

Wayne's World is a film with a strong sense of self-awareness and a tongue firmly placed in its cheek.
7.5