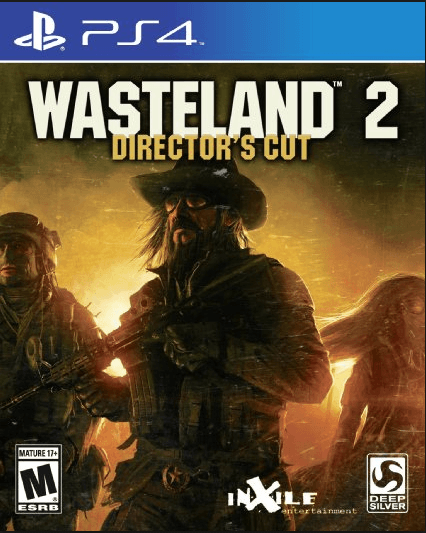 So last month, Wasteland 2: The Director’s Cut was released on PC, PS4, and XBOX One. The game was originally crowdfunded in 2012 and was originally released in 2014. The game’s predecessor Wasteland was an inspiration for the Fallout series and some of the developers who worked on the original title got together on this one as well. Its forebearer is considered a classic title and I was very interested in getting a look at the game myself, with its own unique rendition of a post-apocalyptic world.

Also, I would like to thank my friend Brenton for hosting and guiding me on my first professional foray into reviewing a PS4 title. Thanks a bunch for putting up with me, buddy! 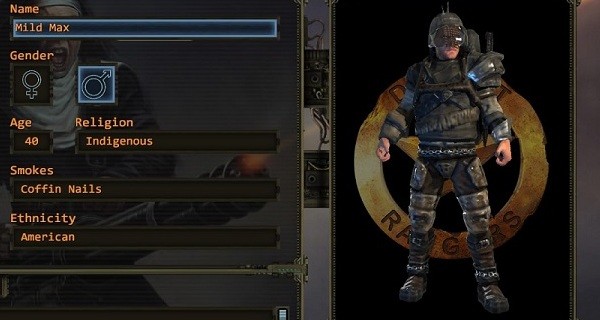 The story of Wasteland 2 takes place in a post-apocalyptic world in which the nuclear Armageddon during the Cold War did occur but humanity was not completely wiped out. In the Arizona desert, army engineers and desert survivalists banded together to form ‘The Rangers’ who would set out to help survivors in and around the wasteland near them. These events all took place in the previous game and are briefly covered in a live-action opening cinematic.

Further discussion with other characters in the starting area gives further insight into the events of the previous game and the effect it has had on the current timeline. There are various carryovers from the first Wasteland game and it in fact starts off with the players attending the funeral of ‘Ace’, who was one of the heroes from the previous game. As you progress through the game you’ll encounter a number of these characters who were present in the first game, or at least the consequences of their actions. 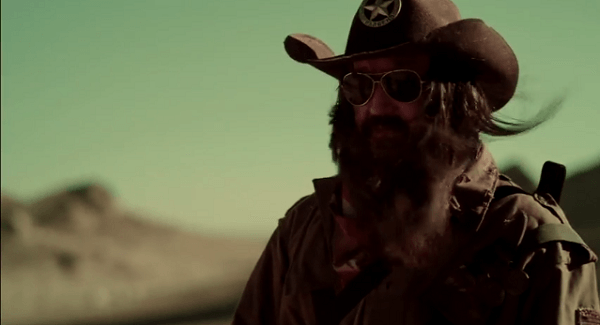 The game presents an interesting and (sometimes) funny depiction of a post-apocalyptic society, with a number of interesting characters and factions to meet. The ‘Mannerites’ are a particularly interesting example with their veneer of polite civility balanced out by their barbaric enforcement of what is ‘bon ton’. This juxtaposition certainly endeared me to them as characters (if not as people).

The quests are also similarly interesting with plenty of interesting characters to meet (and kill) along the way. Luckily, depending upon the skill composition of your party, you can have multiple paths to resolving any given problem or situation. Certain dialogue options open up to you if you have the prerequisite points in a particular but that doesn’t necessarily mean that you should take a particular option as it may resolve in a way that you had not originally intended it to. Certain skills like ‘animal whisperer’ also allow you resolve combat encounters (with critters) peacefully by soothing the vicious spirits of animals rather than killing them outright. The choices you make in these situations affect the story you get outside of just how much ammo and health your characters have. 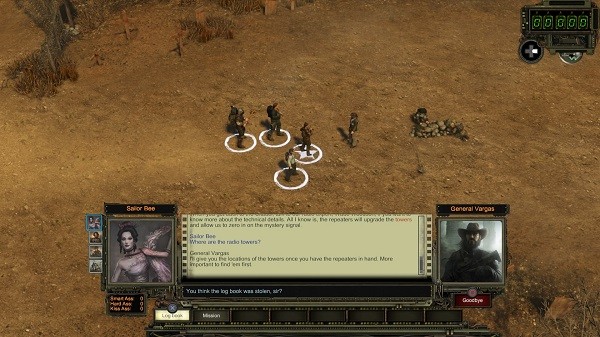 The gameplay largely appears to hold true to the form game’s PC release with a mixture of isometric turn-based and real-time gameplay. Traversing the maps is done in real time with the player controlling one character and then having the rest follow that character in formation. Sometimes this would lead to complications as we’d move our lead character to edge of a cloud of poisonous gas and turn them around which would then cause the entire party to form up behind them… into the poison gas. During combat encounters, the map takes on a grid pattern and the gameplay becomes turn based with your characters and the antagonists taking turns in order of their agility. This aspect of the gameplay is fairly rudimentary in terms of isometric RPGs and easily recognisable by anyone who has played classic RPGs.

Within combat itself, there are a number of weapons and special equipment options to customise your characters with. Obviously you’ll want to kit out your characters in accordance with weapons they are better at using and each weapon has its own pros and cons. Assuming you’ve equipped them to someone who knows how to handle them, assault rifles are great for laying down a hail of fire and shotguns are great for hitting groups of enemies at once. 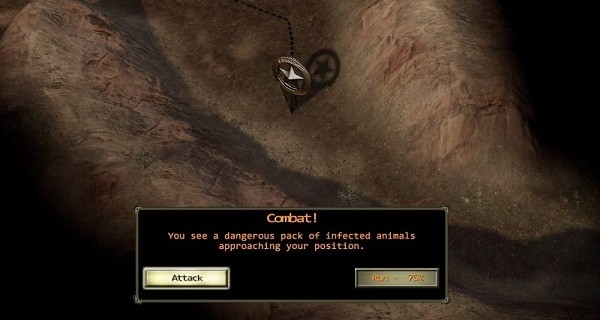 In addition to the combat encounters, there are also social encounters as well which your characters can get involved in (which I preferred much more generally). I enjoy that the game does allow me a number of options for getting out of hostile encounters without having to kill anyone. That being said, I felt that the game locked me out of many options unless I specifically constructed a party with a specific set of skills. I’m sure that someone somewhere has worked out the optimal strategy for crafting a party which can get the most of various encounters, but I guess it just feels a bit punishing when you realise that your party just isn’t suited to deal with a particular challenge.

Attentive readers will note that I’m not a native player to the PS4 and that this is my first review on the console. Since this was my first extended foray into the wonderful world of Sony’s gaming platform, I made sure that my friend and I would play through it together. My first instinct upon learning and using the controls was that the PS4 controls were not optimally used. There are buttons which bring up scroll wheels to access specific skills and there’s a dedicated button for radioing back to base (which you don’t do that often actually). Accessing skills and specific abilities within these wheels quickly became annoying and tedious.

After consulting with my friend/guide/patsy, we both agreed that this control scheme was not (in our humble opinion) optimal when compared to other turn-based games on the PS4. We also experienced a number of glitches wherein the controls would become inverted in a strange manner and the camera would lock to a specific location. The camera movement itself was also somewhat finicky and a chore to use. I feel that this area of the game could certainly use some more polish on the PS4. 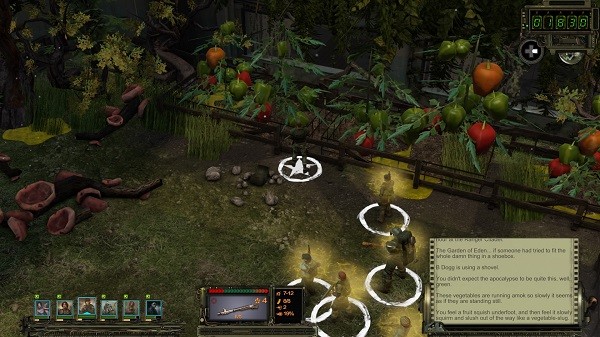 The visual design of Wasteland 2 is deliberately evocative of older isometric RPGs. The textures and graphics are dated but this adds to their nostalgic charm in my opinion. I didn’t quite notice all that much difference in the visual upgrade from the original game but I wouldn’t recommend Wasteland 2 to someone on the strength of its graphics to begin with so this is somewhat of a moot point. It’s not pretty, but it’s pretty enough dammit and that’s gonna be good enough for most people. There were a number of bugs we encountered which drastically changed the textures within the game and I hope that InXile will release a patch soon to fix this.

One thing I did quite like was the artwork that this game has throughout. These are generally found in the character portraits and the loading screens. They’re not the biggest part of the game, but I like that they’re there. 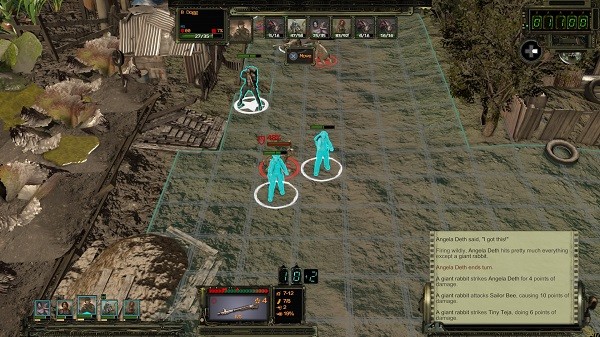 The music in this game largely fits the tone and setting they’re going for on each map. The soundtrack creates haunting soundscapes with reverberating acoustic guitar strings and other more sinister sounds. It very much reinforces the Western feeling it invokes with its images.

One of the big drawcards for the ‘director’s cut’ edition of the game was that it would feature far more voiced dialogue than the base game. This is certainly a pleasant addition to the game and helps bring to life a lot of the characters beyond their portrait. The sound quality appears to be a bit hit and miss here and there as you can clearly tell that the voices have been recorded in different sessions and with different equipment on hand. An astute sound engineer would have picked up on that, but occasionally mistakes are made and it didn’t spoil my fun too much. 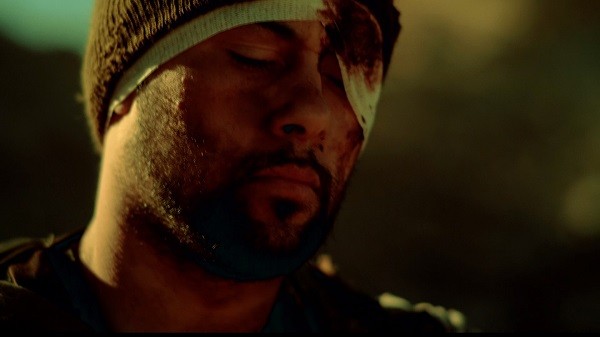 So in the end, what do I think of Wasteland 2: The Director’s Cut? I love the game and can say that with pretty much no reservation… but I did not like this port to the PS4 that they did. The story and setting are really rad… and not just because it’s a radioactive wasteland. The gameplay is fairly standard isometric RPG faire, but I’m not sure how well it was suited to being ported to the PS4. The visuals aren’t anything particularly noteworthy in terms of graphics or design, but I enjoyed the little bits of artwork scattered throughout. The audio design is actually quite nice and the voice overs are pretty good too but can at times be of mixed quality. Overall, I’d recommend the game as a fun RPG, but I cannot recommend this port of it and my score must ultimately reflect the version that I played. Assume something higher for a PC version.