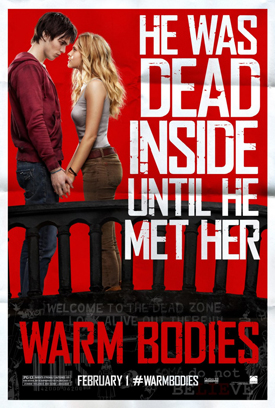 Warm Bodies is your typical love story; boy meets girl, boy eats girl’s boyfriend’s brains, boy falls in love with girl. Wait what? Ok so it is a not so typical love story, and it certainly isn’t a typical zombie story. If you are the kind of zombie fan who can only handle the classics, or whose zombies have to be violent, moronic drones then you will hate this movie. This movie is largely targeted at women, or men who have to sit through another boring rom-com with their girlfriend/wife. While it has its share of problems, it provides a nice subtle look at the ridiculousness of romanticising the monster genre, which is becoming ever-popular in this day and age. 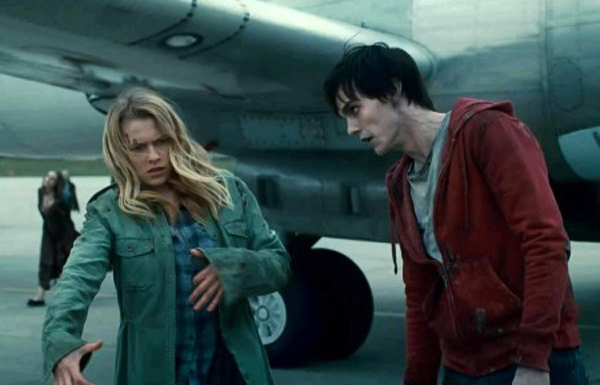 Warm Bodies follows the exploits of ‘R.’ R (Nicholas Hoult) is a zombie who can think and feel, but doesn’t have any memories of his life before being turned. He knows the rules of being a zombie, and is forced to live by them but is conflicted and disappointed by the fact that he has to abide by these rules. We learn very early on that by eating brains of a human, zombies gain their thoughts and memories, which is what triggers R falling for our lovely heroine, Julie (Teresa Palmer).

Aside from the zombie element, the movie plays out like any typical teen romantic comedy would; the girl’s father (played amazingly by John Malkovich) disapproves of R, although in this instance it is a little more justified than in many rom coms. The pair also have to overcome a difficult hardship and save lives, all while growing together and falling in love. 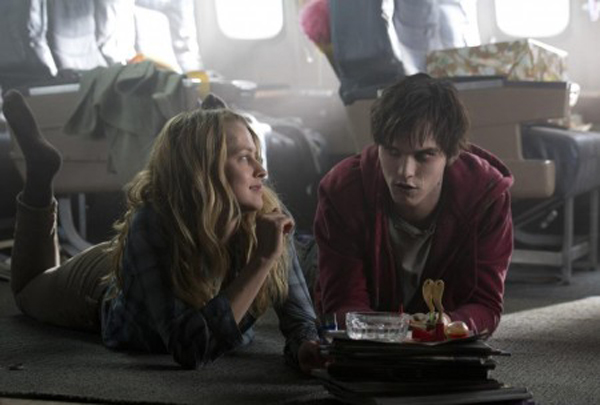 After eating Julie’s boyfriends brains, R develops his memories and this in conjunction with his initial reaction to seeing her starts to create a change in him, both physically and mentally so that he starts to become human. He immediately tries to protect Julie, and keep her safe from the other zombies, as well as their more vicious counterparts, the Bonies. He does this by making sure she stays locked in an airplane, and not leaving unless accompanied by him.

When watching the movie, I was really hoping that the pay off at the end would be that Julie wasn’t actually in-love with R, but instead was suffering from stockholm syndrome from him keeping her locked up. However this didn’t seem the case, and instead we end up with the typical, sappy “love conquers all” element that we see time and time again.

To enjoy Warm Bodies you effectively have to convince yourself to buy into the premise. If you have heard or seen anything about zombies in any media then you will be hard-pressed to suspend your disbelief enough for the movie to not make you angry. However if you can do that, you will find a film that although nonsensical at times, does a fine job of poking fun at how we humanise monsters so often in media today. 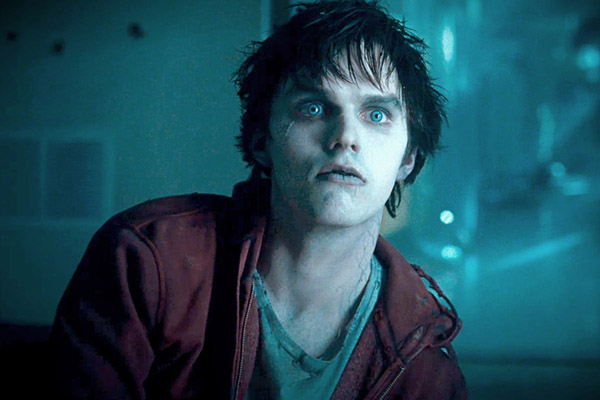 As I started to watch, I was trying to determine whether Warm Bodies is actively making a mockery of books/films like Twilight, or if it is a happy coincidence. It didn’t take me long to realise it was definitely the latter, as although there are no distinct jabs (at least I don’t think there was… I haven’t read or seen Twilight so I can’t be sure), the whole tone of the movie is reminiscent of a parody without ever crossing that line. Also there is one scene in particular where R is matched up against a picture of a traditional-looking zombie, and the differences are compared.

As a blend of the zombie and rom-com genres, it does allow for guys and girls to watch it together without either side being too repulsed, but saying that, neither side will be particularly thrilled either. The people who would probably get the most out of the plot would be those that are analysing it for an English or film-review class, as there is a lot to delve into here. 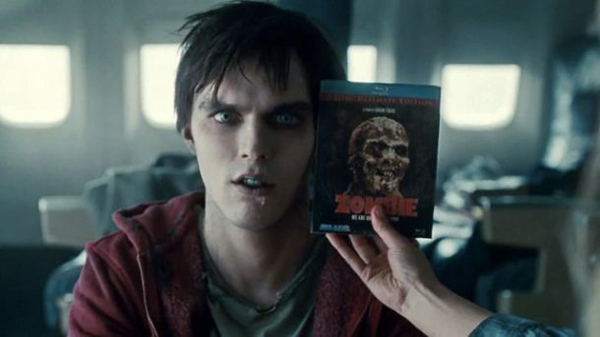 It is difficult to make a post-apocalyptic movie setting look fresh and unique, and while Warm Bodies doesn’t quite go that far, it does accomplish a lot with the standard crumbling buildings and shanty towns. Most of this is accomplished by the fact that a good portion of the movie is set in an airport, which is not usually an area visited in most post-apocalyptic film/video games.

Aside from locale, costuming and makeup are done so well in this movie. Each zombie looks unique, and you can get a sense for their (undisclosed) backstory just from looking at them. Everything from the janitor, through to the two children in matching school uniforms. A lot of the colours are the same drab, grey-washed look that you would expect, but there are enough splashes of colour through the movie to break it up, and these rare instances of colour really do stand out and grab your attention (a perfect example would be R’s hoodie, which is a vibrant red colour even though it is tattered, torn and dirty). 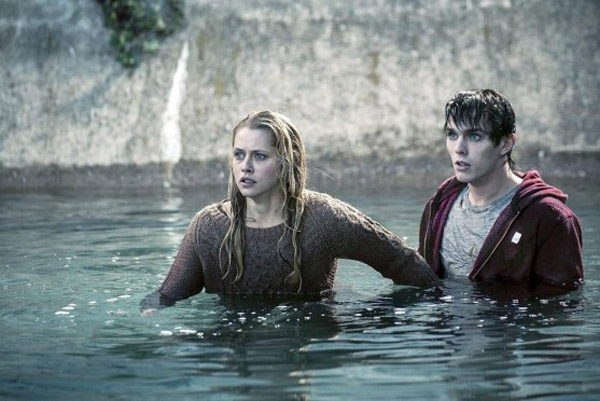 The zombie makeup is vastly different from what many zombie-fans would expect. Instead of huge open wounds and oozing scabs, the zombies in Warm Bodies look dirty, slightly scared, and pale. This helps to make you forget that these creatures are meant to be nothing more than mindless eating machines who only want to feed. The lack of intensely violent makeup would also mean that the movie is more bearable for women, which is undoubtedly its target audience.

For a movie about interacting with zombies, Warm Bodies is a surprisingly dialogue heavy film. This would be alright, if half the dialogue wasn’t mumbles, grunts or groans. Even as R starts to develop his verbal skills, he can be difficult to understand and during my first viewing of the movie I had to switch on subtitles just so I could understand what was happening.

Aside from the dialogue, the movie suffers from a bit of audio inconsistency. One scene will be barely audible, while the next will be blowing your ears off. This isn’t only true for the action moments of the movie, as many of the touching moments suffer from the same problem.

While the movie’s dialogue and audio in general can suffer, one aspect where it really shines is the soundtrack. Warm Bodies compiles a bunch of great songs that are punctuated by some all-time rock and roll classics. Expecially during the earlier parts of the film, when R doesn’t have the ability to speak fluently, these musical tracks serve as a way for him to communicate what he is feeling, and as soon as a song starts to play the audience is made aware of the exact tone that is being conveyed. 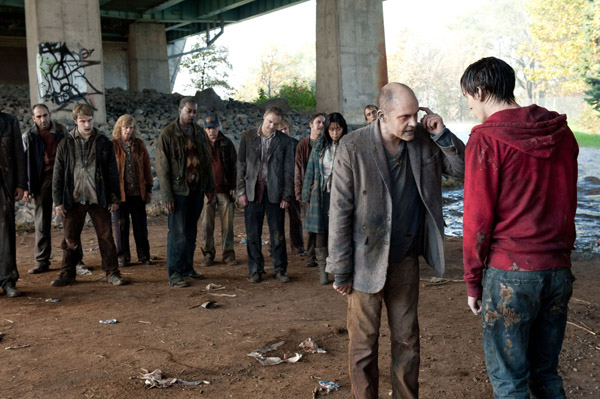 The wealth of extras that come on-disc for Warm Bodies is incredible. Aside from nine deleted scenes, there are bunch of special featurettes and behind the scenes footage for fans to enjoy. Everything from how the make-up was applied for the zombies on the show, to home movies of actress Teresa Palmer, and even a look at the zombie-school the actors had to attend. There is definitely enough here to keep you entertained for hours after the movie finishes. 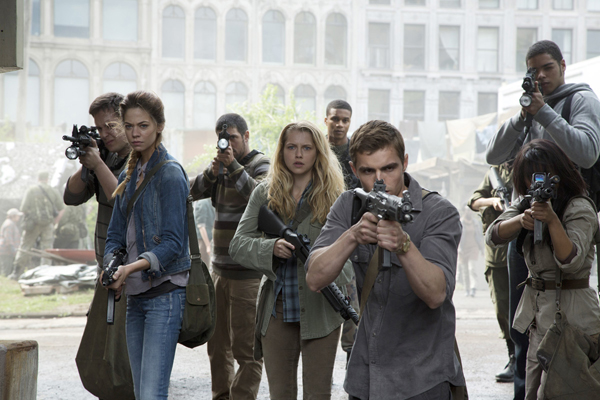 I think the best way I can describe Warm Bodies is “watchable.” While it has its problems, and it likely won’t be remembered fondly in years to come for any kind of cult appeal, it does manage to raise some interesting points about how the monster genre have become romanticised in film and TV. A mostly likable cast, help round out this film into something that won’t sit well with horror fans or zombie-purists, but adequately serves as a conversational piece. Due to its nature, I wouldn’t be surprised in a few years to hear it being added to the curriculum of some university film-analysis class.