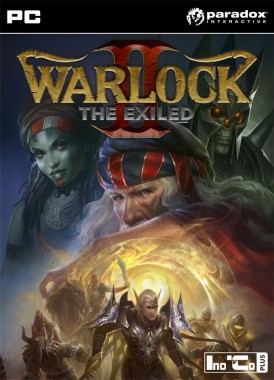 Warlock 2: The Exiled is the latest title in the Majesty universe. The game is a 4X title that pits Great Mages against each other and against the game itself, as the relentless onslaught of NPC spawns and The United One and his four Vicars wreak havoc upon all who oppose them. Warlock 2: The Exiled introduces a new mode called “The Exiled” that will see the player through their path of vengeance against The United One. 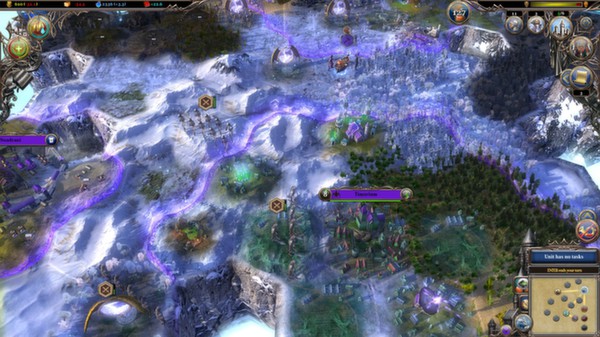 The plot in Warlock 2: The Exiled is not the most extensive plot for a fantasy game. The player’s chosen Great Mage has been exiled to a small world shard after the shattering of the worlds. In The Exiled mode, which serves as the game’s campaign mode, the player fights their way through the portals that links the worlds until they can face off against The United One and his four Vicars back in Ardania. The entire plot is told in the single map, versus the traditional multi map campaign. Throughout the game, small quests will pop up, both related to the overall plot and smaller problems of the locals. The Exiled mode does give enough of a plot to distinguish itself from the traditional Sandbox mode, but it does end up feeling more like wallpaper than the star of the show.

Warlock 2: The Exiled is a great entry point for those new to the 4X genre. Though many of the traditional 4X mechanics are present in the game, Warlock 2: The Exiled is a bit less complicated than many other games in the genre. The diplomacy system is useful for stalling in the inevitable conflict and trade, but there is no diplomatic victory. Instead, combat and sheer magical might are the game’s main focuses. To win, players can either capture Holy Grounds, defeat the other Great Mages, defeat the Avatar, defeat the United One, and/or cast the Unity spell, depending on what win conditions were enabled when the game was created. 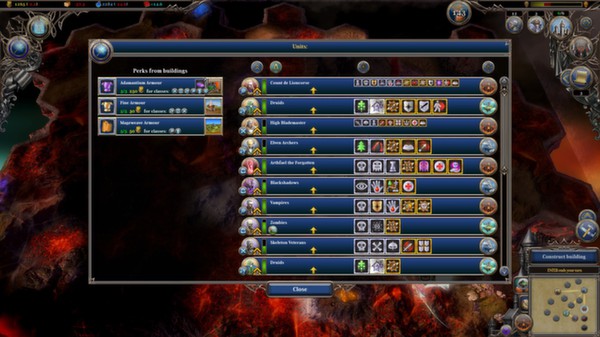 The research system is focused on adding spells to the player’s repertoire long with a few handy permanent effects. Spells fall under a few general categories: direct damage, direct healing, buffs, debuffs, enchantments, dispels, and terraforming. Each spell has a cast time ranging from a fraction of a turn to lengthy multiple turn spells along with a mana cost. These spells can be taught to other Great Mages as part of trades, but of course, that runs the risk of the very same spell being turned against the player.

The map in Warlock 2: The Exiled is actually a string of islands of varying sizes and environments linked together by portals. The design allows for a large variety of environments in a single map. A player can be fighting in a dense jungle on one island and then immediately do battle on a volcanic island from hell with a quick hop and a jump through a portal. With the varied environments, terraforming spells will become an important part of every Great Mage’s spell book. Turning flat plains into towering mountains can slow an enemy’s advance, while raising the land from its watery depths can allow access to the undefended flank of an enemy city. 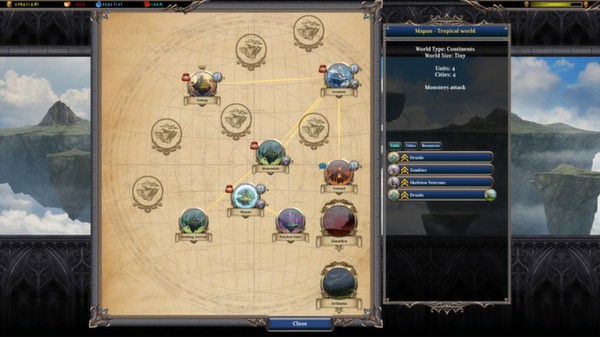 The bread and butter of the economy are the cities. Based on what effects have been researched, players will be given the right to construct a certain number of cities capable of creating buildings and units. Any extra cities will need to be converted to special cities that will earn favour of a deity, provide local defense, or pay taxes to the player. Each city will generate mana for spell casting, gold for unit recruitment, and food for building city population and unit upkeep. As the population of each city rises, new buildings can be added to the city, allowing for the recruitment of new units, the generation of resources, or provide defenses against invaders. Enemy cities can be conquered and either captured or razed to the ground. Capturing the city will allow access to the host city’s racial units, but will generate less resources and the city cannot be converted into a special city.

Hero units known as Lords will visit the Great Mage looking for employment throughout the game. These Lords are tougher than the average unit and can be equipped with a variety of artifacts to provide further stat bonuses. However, the player will need to pay a fee up front for the Lord’s services and provide an upkeep cost every turn. 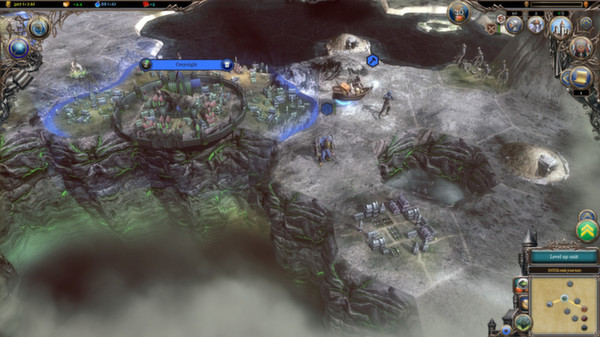 Combat is a simple affair in Warlock 2: The Exiled. Units come in three damage types: magic, melee, and missile. As units do battle, they slowly gain experience. Every time the unit gains a level, one of three possible bonuses can be applied to the unit, making it in every player’s best interest to keep veteran units alive and well.

The other Great Mages are not the only danger. NPC spawn tiles will randomly appear throughout the game, spewing an endless stream of independent units itching for a fight until the tile is occupied by a Great Mage controlled unit. The spawns provides a level of randomness to the game that range from interesting distractions to irritating bad luck. The NPC spawn rates can be tweaked when the game is created. 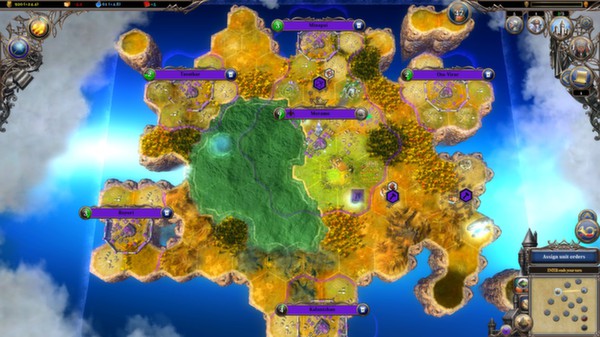 “The Exiled” mode serves as the game’s equivalent of a campaign mode. These single games can range from short multi-hour affairs to long games that may take months of effort to conquer, depending on the initial settings chosen by the player. Those expecting a lengthy multi-map campaign will have to wait for modders to fill the gap with the help of Steam Workshop.

Warlock 2: The Exiled’s gameplay is fun, but it is a bit simpler than many of the 4X games in the genre. This makes Warlock 2: The Exiled a solid first game for those new to the genre. It is complex enough to be engaging, without being so complex that it becomes frustrating to new players. For those more experienced with the genre, the game still has enough density to keep players occupied for long hours, thanks to its extremely scalable difficulty level.

Warlock 2: The Exiled has a solid set of visuals. The 2d images used for the large portraits make for solid fantasy art. Some of the smaller unit portraits are hit and miss though. The unit models look great and the units containing multiple characters are well populated. With the graphics turned up high, Warlock 2: The Exiled is a detailed game with a lush environment. 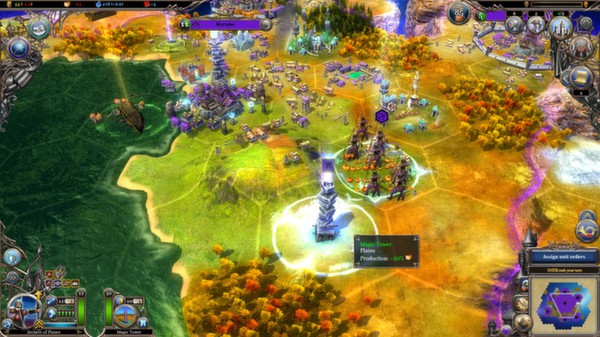 The voice acting in Warlock 2: The Exiled is cringe worthy. To make matters worse, the voice actors were not provided with much to work with. The lines tend to straddle in the middle of generic and corny and quickly become repetitive after being used over and over again. The acting itself is on par with corny B movies done by small time actors from the local community theatre. The sound effects and music are actually solid in comparison to the voice acting. The music is enjoyable to listen to and the sound effects sound realistic enough to not distract from the gameplay.

Warlock 2: The Exiled is a good 4X title, but the game seem to lack a bit of overall polish. The poor voice acting, the odd grammatical error, and the repetitive texts make the game a bit rough around the edges. However, Warlock 2 strikes a great balance between being a newbie friendly 4x title and a dense addictive turn based strategy game. Those looking for a first step into the 4X genre or something a little simpler to occupy hundreds of hours will find Warlock 2 a great buy.