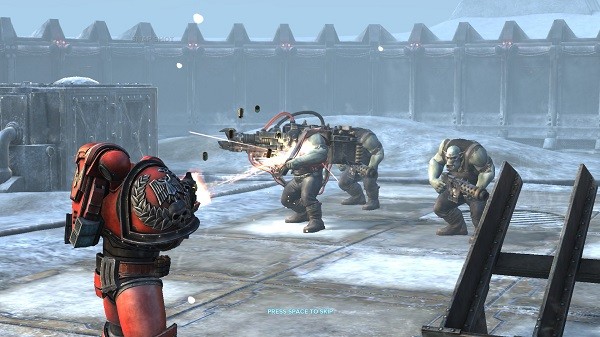 Overview
So Warhammer 40000 Regicide is a turn-based strategy game who takes inspiration from an in-universe chess-like game in the 40k universe. I previewed the title a couple of months ago (which you can read about here) and I wrote that I felt the game provided an interesting scaffold upon which more could be added. I return once more, into the maelstrom of battle, to give you my final verdict on whether or not this game has provided the substance I felt it needed.

Story
The story follows the exploits of a contingent of the Blood Angels Space Marine chapter as they fight regain a world lost to Greenskin forces… or something to that effect. To be honest I am not entirely sure as it wasn’t conveyed in a particularly engaging way. Besides an opening cinematic which was released in one of the trailers, pretty much everything is told in voiced dialogue between characters before each mission. I stopped paying too much attention to the story largely because the information it was giving me was rather banal and was disjointed from what was happening in the missions themselves (which were actually quite good). Although the universe of Warhammer 40000 is rich and dark, you won’t really find much of that here… 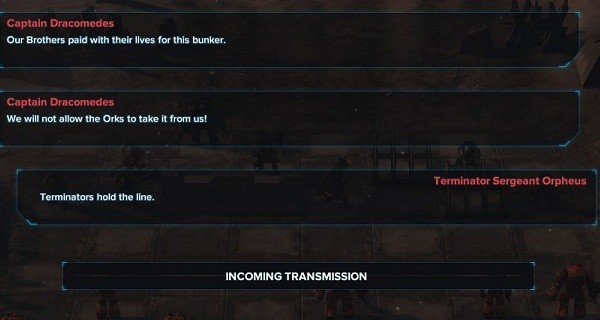 Gameplay
A ‘cynical Warhammer license cash-in’ this game is not and it’s in the gameplay where the devs effort shines through. The game does feature a regular version of chess with the various 40k models representing pawns, bishops, rooks, etc. It’s the chess we all know and love but with pretty cool looking models.

Where the game gets interesting is with its ‘Regicide’ game mode. Here pieces move and can capture other pieces just like in chess. Unlike chess however, these units also have secondary abilities as well as attacks which can kill other units. This extra element seemed shallow to me at first glance, but then I grew to appreciate the intricacies which these added elements brought in to the traditional chess gameplay.

In Regicide, the turn is split up into movement and initiative phases. The movement phase is essentially the same as chess while the initiative phase allows you to use a limited number of points to activate unit attacks and special abilities. Each unit has its own health and armour which can go down with attacks against them. It is entirely possible to wipe out another player without capturing a single piece. It would be time consuming, but it is definitely possible. 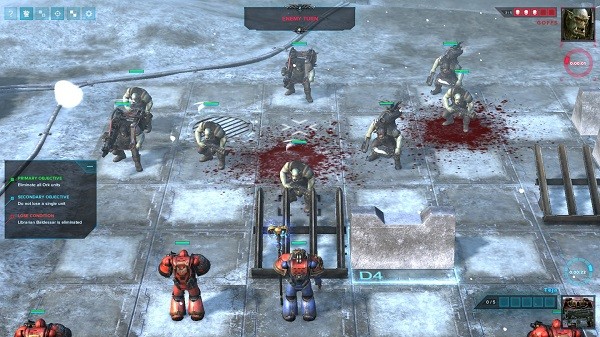 Furthermore you can spend these points on abilities which have a variety of effects, ranging from increasing your units offensive and defensive capabilities, preventing enemy units from using their abilities, or creating shields. This does add an extra layer of randomness to what is essentially a game of pure logic but it’s a strategic randomness in a similar vein to the likes of XCOM with the player able to manage risk with reward.

The single player campaign introduces you to all these abilities and tactics at a gradual pace. It isn’t however just training for a multiplayer endgame as the design of some of these missions is quite nefarious. I would compare them to logic puzzles which require you to consider all the variables and options before making a decision. 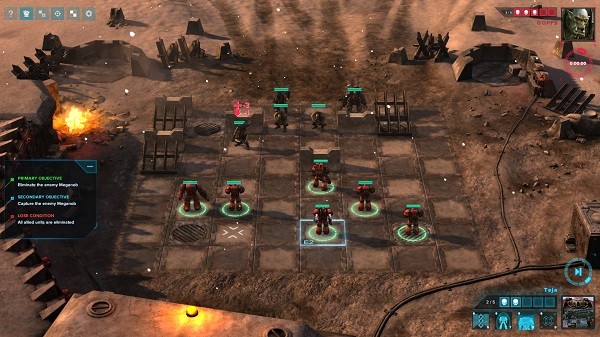 In one example, I was tasked with escorting my captain (king) piece to the other side of the board with only tactical marines (pawns) to keep him company. The opposing ork forces outnumbered me with pawns, knights, and bishops. I lost my captain many times doing that mission, but finally succeeding felt like quite an achievement as I figured out a strategy to get my captain to run the gauntlet.

My one problem with playing against the computer in the campaign is that the AI can be very erratic at times with determining when to capture a piece. On many occasions, I had pieces which were open and unguarded but were not captured by the AI. Instead, the computer would actually retreat its pieces back. This could have been the result of a very cautious strategy but it didn’t appear to have much sense to winning the match or being in-keeping with the ork mentality… 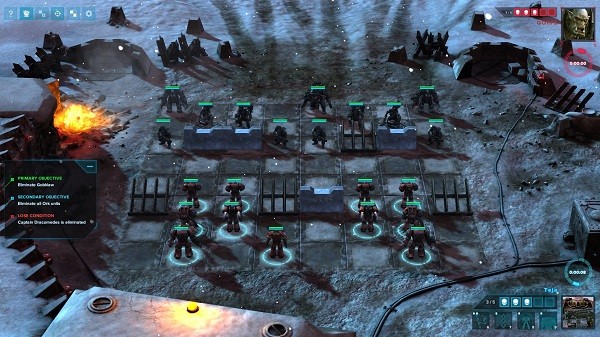 Visuals
The visual design here is fairly damn spot-on. The unit models are intricate and close attention to detail have been paid to make these units look beautiful. During certain occasions when a unit attacks or captures another piece, the camera will zoom in to an over-the-shoulder shot to show the two units fighting each other. Once again, this very reminiscent of XCOM but also appears to have taken quite some inspiration from the kill animations of the Dawn of War series.

My main concern with the visuals is how the units are animated. Most of the time, things look awesome and fluid as units eviscerate, mow down, and generally brutalise each other in very macabre but beautiful little scenes. This is very much in keeping with the grim dark style of the 40k license but there are several instances however where the animation feels clunky or untrue to the universe. The walking animation for some units (like the devastator and meganob) looks less like a stride and more a waddle which is certainly amusing but kinda defuses the awesome factor of the models. 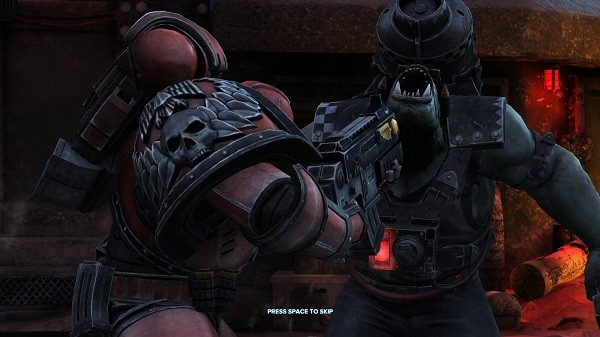 One instance I found a little disconcerting was when the space marine captain basically shanks an ork with a power sword repeatedly. The disconcerting part wasn’t the violence but rather the inelegant way in which the captain was using the sword. Maybe I’m just being pedantic but from what I know (and imagine) from the lore, power weapons are more akin to ‘lightsabers’ than they are to conventional weapons. But hey, maybe I’ll be the only one to split this particular hair.

There are also a number of visual bugs with shots not connecting properly (when they should) and hitting their target (when they shouldn’t). Most of the time this isn’t a problem, but it is still frequent enough in a single match that it’s worth mentioning. 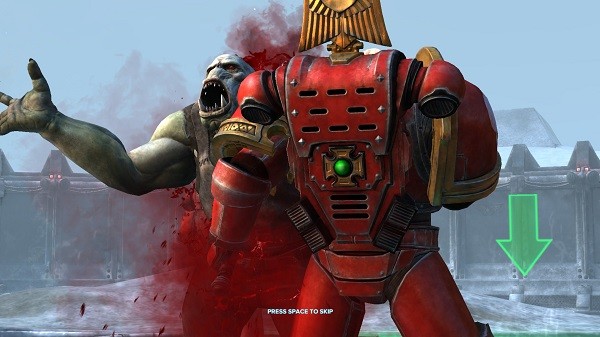 Audio
The music in the game is basically a lot of deep orchestral movements interspersed with some industrial tones and chanting. These tones I’ve encountered in other 40k strategy games like the aforementioned Dawn of War series and it works well to accompany the strategic play style of the game.

Where the audio does fall down is in regards to the voice acting of various characters within the game. The voice acting for the units themselves is solid and everyone sounds suitably superhuman/orky in this aspect. The narrative campaign, however, features some pretty bad voice acting. I’d be willing to look past this if the dialogue had something of value to say, but unfortunately this isn’t the case. You’ll probably end up reading through everything yourself… assuming you don’t skip it entirely and just read the mission briefs. 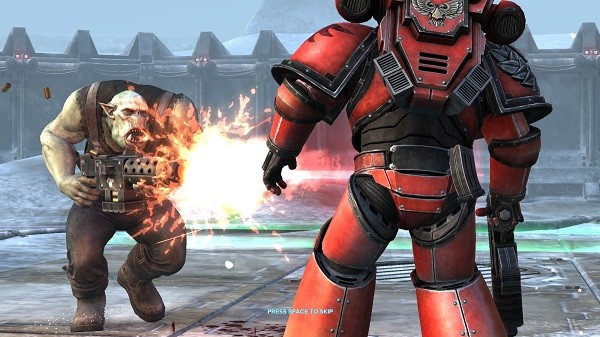 Overall
Overall, I have mixed feelings about this game and I’m a little disappointed with the execution of some aspects. It has some of the best unit models I have seen in a 40k game but also some pretty bad unit animations to go along with it. The campaign narrative is a mess while the actual mission designs you play out are actually quite fun to figure out. The sound design is solid but has some glaring faults when it comes to voice acting in its narrative aspects. I found certain aspects of the gameplay to be quite fun but I was disappointed with a lack of polish in other parts. If you’re fan of chess and the 40k universe then get it on sale but if not; then this game is not for you.