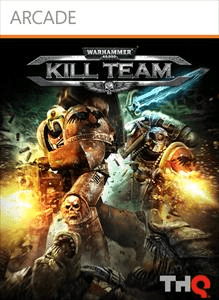 Overview:
The Warhammer franchise has spent the majority of it’s tenure on PC’s and table-tops, however with Kill Team, the franchise comes to the Xbox with Kill Team and soon with the game’s tie-in, full retail game, Space Marine. What we have with Kill Team is essentially what you’d call a side adventure within the Warhammer 40,000 universe. It looks like the usual Warhammer game, but it plays far differently. Kill Team harkens back to shoot-em-up’s of old, whilst spinning a nice fresh take on the genre.

Story:
Admittedly, I am not a huge Warhammer fan. I consider myself to be a fan, just not a huge one. Thus, I do not know the ins and outs of the series expansive mythology. I am sure their is a far deeper storyline at hand in Kill Team than I percieve, so consider this the view of someone not well-versed in Wahammer mythos.

Kill Team tells the tale of a small squad of space marines who stage a seige of an Ork starship. You play either alone or with a friend and blast your way through different levels of the ship in an attempt to bring it down.

Now this is all you need to know to understand the game, which is one of the thing’s I loved most. I am not one who particularly enjoys being force-fed a bible-long mythos, to be able to understand a storyline and thankfully this was far from the case with Kill Team. The game simply places you into an easy to understand world and gives you a motivation. It is perfect for this style of game and anything more would be too heavy handed. This is a shoot-em-up styled game after-all, you don’t come for the story, you come to shoot stuff up.

So all-in-all this type of no hands held story-telling works perfectly for Kill Team. 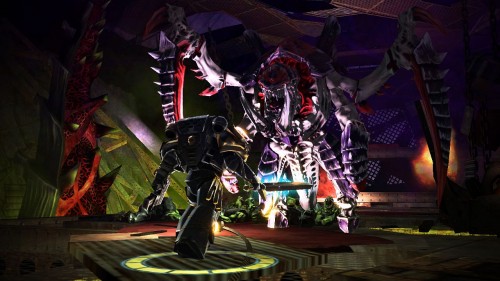 Gameplay:
This is the part of this game that makes it great. Put simply the gameplay is so cohesive and well structured. You can feel the echoes of past shoot-em-up games, and it may certainly bring back some memories to those who hold the genre dearly. |

Thankfully the game never falls into the trap of feeling stale. There are 2 game modes, both of which can be played co-operatively – Campaign and Survival. Both modes are wonderfully crafted and do not feel weak in any way.

I personally found myself sitting down with this game, along side a partner and looking up at the clock realising hours had slipped away from us. The gameplay did a great job of keeping itself fresh and fun, from start to finish and still holds a great deal of replayability through it’s Survival mode, which pits you against a horde of orcs in an attempt to earn a high kill count which is also ranked in online leaderboards.

Single player unfortunately wasn’t as fun as the co-operative play was, as the game feels as though it was sculpted as a co-op game. Heck, the word Team is even in the title. Although this may be the case, singe player is still fun in it’s own right, but in these types of games, playing together is always to better option.

Overall the gameplay is very simple and just plain fun to play and really isn’t that what games like this should be? 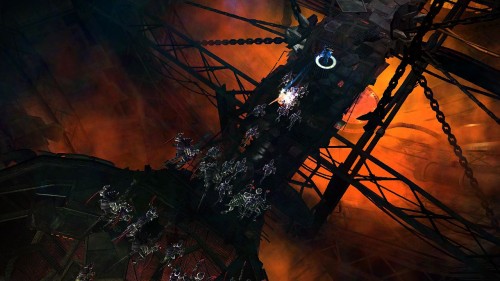 Visuals:
The graphics of the game aren’t anything worth writing home about, however they do they job. For an arcade game these graphics look great, but obviously they will not match up to that of a full retail game. By the time the new Warhammer game, Space Marine, comes around, Kill Team may look shoddier in comparison. But you couldn’t ask for anything more.

The artstyle is very much a perfect fit for the Warhammer universe and the level design looks great. Unfortunately at times some character models look a little choppy, but it’s nothing too horrible. As you would imagine the appearance of the game, is gritty and dark, with little to no bright colours, but that is h0w a Warhammer game should be.

The graphics and art-direction in general are pretty good for an arcade title, just nothing too special.

Audio:
Probably the weakest part of Kill Team, was the audio. It is not that it was inherently bad in anyway, it’s just that it wasn’t anything worth remembering. Right now after having just played the game just under an hour ago, I am struggling to remember anything noteworthy. It’s all very stock standard, which is a shame. A Warhammer game should feature epic music to match the epic battles that are taking place, however Kill Team’s soundtrack falls short.

It provides nothing in the way of surprises and is simply just something pulled out of any old Space Shooter game. Which is as I said before a shame. I would have like to see them do so much more with the soundtrack, but unfortunately it was just average.

However, the sound effects and character noises are great. I love the orcs grunts and squeals, it just makes killing them all the more fun. Also the weaponry sound effects are well done and are definitely on par. Which is something good about the audio, thankfully. 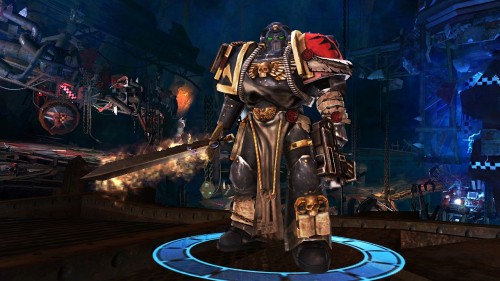 Conclusion:
Warhammer 40,000: Kill Team is a game, that won’t make many waves. But it is good at what it does. It doesn’t go for broke, it goes for good and it achieves that with ease. In 5 years time not many people will most likely remember this title as anything more than a way to unlock thing’s for Space Marine. Which is sad really, but it’s what is probably going to happen. However this is a damn good game, that deserves to stand up on it’s own. It doesn’t revolutionise the genre, it doesn’t stand out and it doesn’t do anything entirely new/ But it is a damn good game that is more entertaining and worth playing then a lot of full retail titles out there.