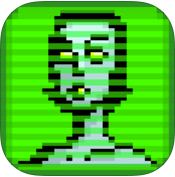 Game Stew are a fantastic game development and publishing company that tend to create a lot of old-school style games that mix both retro and new-age styles as well as gameplay types. Known for games like Tower of Fortune 2 (read the review here), Game Stew are incredible at what they do and their games almost always hit the mark, even though sometimes it is a very near miss. I’ve been given their game “War Of Eclipse” to review, read on to see how it went. 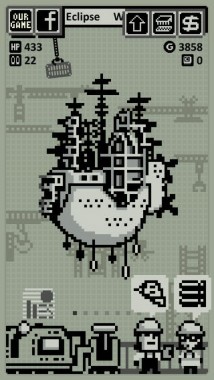 There isn’t much to the story though I don’t think that’s much of a problem at all. What we’re told is that one day, possibly a long time ago, a huge calamity transpired in the form of a giant explosion which, in turn, wiped out most of the worlds population. After this apocalyptic disaster came about, the survivors began seeing monsters, demons and angels in the sky, no matter what they saw up there they were killed by them, it seems as though whatever force they were witnessing was that of a malevolent kind. Now the leftovers of the human race must take the fight to the skies in an attempt to combat the perpetual danger that the appearance of these monsters bring, and that’s where the game kicks in. You are a commander of one of the last battle ships that the humans have, your mission is to basically survive and I know that sounds vague but I’ve played this game for more than a few hours and I don’t seem to progressing much.

Now the story is simple yet also extremely cool because, much like Game Stew’s other titles, I makes you question the story which I think is fantastic because you get to make up your own mind. The enemies you fight are really well designed and you can see how they fit in to the actual story. Enemies like a giant shadowy figure holding what looks to be an old and broken airship, as if it had possessed it, it is enemies like that which really get one thinking. If only the names of the monsters were as good as the monsters themselves, they lacked…something, having an enemy with rockets on it’s back called “Rocket Wings” is kind of unimaginative but considering the monsters themselves were interesting I wont make a big deal out of it. 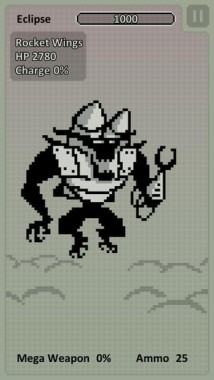 I wish the gameplay was as good as the story, I really do and I’m not saying that the gameplay in it’s entirety is bad, it just gets a little bit old after a while. Basically you choose a ship and you spend the game upgrading and adding to it as you fight off the monsters, that’s not the bad part, I actually love the RPG elements that are put into this game, I really do. What I didn’t like though was the fact that this game felt like a mini-game from another one of Game Stews titles, that’s just the way it felt. Let me lay it down for you so you can make the decision on your own: Within a battle there is a meter below your ship, now that meter has a mark that moves along it at varying speeds, to get a critical hit you have to get the mark into the dark grey zone which is quite small, to get a regular hit you have to get the mark into the light grey zone which is a little bigger. Your enemies have a percentage that continues to climb and when it hits 100%, they attack. Simple as that. 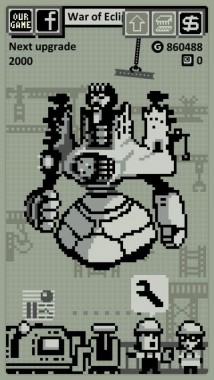 Now there are some other factors that come into play while in combat, things like mega attacks and what not but it’s not a huge focus right now so I’ll come back to it. While the gameplay isn’t bad it just got very mundane and I continually felt like I couldn’t catch a break, I continued to die and while you might think it was just because I couldn’t play very well…it really wasn’t. I’ve played games like Joust Legend that work on a similar level and I’m pretty good at that game yet I just couldn’t seem to step up to the plate with this one. You were also being constantly attacked which is pretty good because it relates directly to the story and the terror you as a survivor are meant to feel but it also sucked because it often occurred when in preparation for the next battle so I never really got a chance to buff myself up or even repair. I liked where they were going with this and it wasn’t entirely lost on me, I just found it hard to want to stick around when the game wouldn’t give me a chance. I don’t think it wrecks the game though, it’s just that it didn’t resonate well with me, I also don’t think that’s a reason not to get this game because the RPG elements really won it for me. 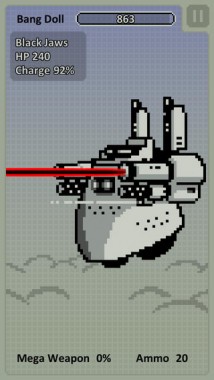 Once again we’ve been given a game that doesn’t have much or any music at all, it has environmental tracks which are brilliant! The most you’ll hear in the game is the feint sounds of the factory that your ship is in and if you listen closely you’ll understand how well done the development team did. Not only that but the sounds of the ships and the sounds of the enemies as well as combat were great and really tie in well with the visuals of the game. Not a complaint here.This game is like all the other Game Stew titles; fantastic visuals! The 8-bit, virtual-pet style really kept me going with this game because I love the way that characters and machinery look. They do a great job at instilling nostalgia in a player and it must take a lot to do something like that so I’ll give credit when credit is due. The enemies looked eerie and creepy yet fit into the world of the game so perfectly. The ships looked great, the enemies looked great, the HUD looked fantastic and each of them just complemented each other. While the gameplay really didn’t do much for me, the aesthetics of the game kept me hooked. 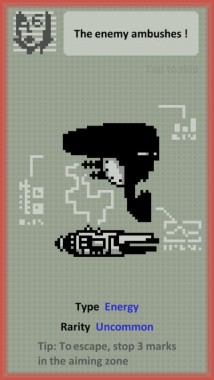 War of Eclipse is NOT a bad game at all, it has so much in it’s favour, between the visuals and the back-story you really can’t go wrong. I just did not like the way the game was played, the RPG elements were great and were implemented well, unfortunately the physical way you play the game (i.e. tapping when a mark reaches a certain point in the bar) just didn’t do anything for me and, while I don’t have a suggestion as to what they could have done instead, I still think the game would’ve been better had the gameplay been slightly different. Apart from that the rest of it was incredible and if you love the company enough you WILL sit through and enjoy the game. Once again Game Stew did a great job!