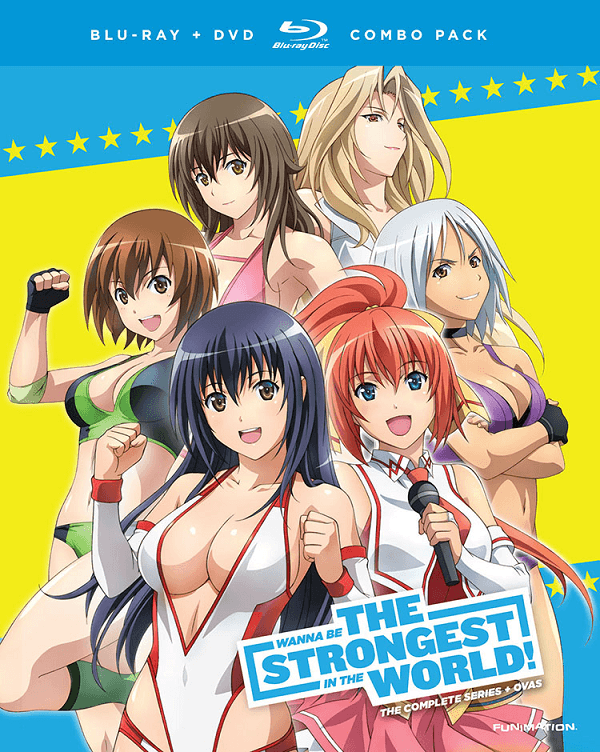 Overview
Pro wrestling has had its highs and lows over the last few decades, with entire companies either dominating an entire scene while others fall into obscurity or a number of smaller organizations managing to thrive all at once. Although female pro wrestling has been mostly disregarded in the North American wrestling industry until recently, it has become something of a thriving industry in Japan. As such, an anime adaptation focusing on female pro wrestlers isn’t too much of a stretch. That being said, is Wanna Be the Strongest in the World! worth your time?

Story
The pop idol group Sweet Diva is sweeping the nation of Japan and its top two members, Sakura and Elena’s, fans are constantly battling it out on the popularity polls to select who will be the center of the group with Sakura always being elected for the center position. As is common in the idol industry, these girls who are well known for their singing and dancing also take part in various other activities. 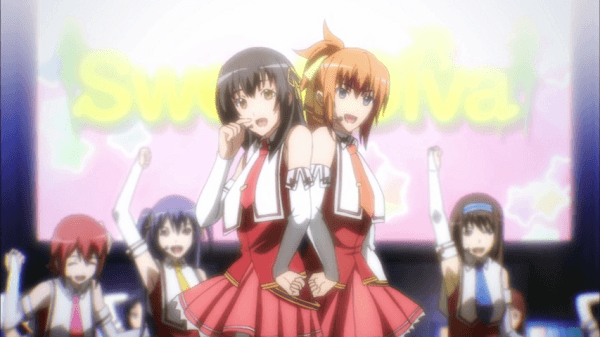 In order to help promote the group and with female pro wrestling being a hot topic; their producer selects Sakura and Elena to compete in a cross-promotion event with the Berserk wrestling organization. Angered by the idol that idols are stepping into the ring with them, Rio, one of Berserk’s top wrestlers soundly defeats Elena in a humiliating manner. In an attempt to prove that idols still work hard and to step up for her friend, Sakura challenges Rio to a rematch but unknowingly accepts stipulations that, upon her loss, result in the removal of most of her hair.

Not one to simply walk away in defeat, Sakura stands back up and states that she will become a wrestler worthy of fighting against Rio and that she will beat her, leading to a story of an idols road through the female pro wrestling industry where her road is paved with defeats before eventually starting to learn how to actually win matches after quite a lot of focus spent on her lousing in humiliating fashion. 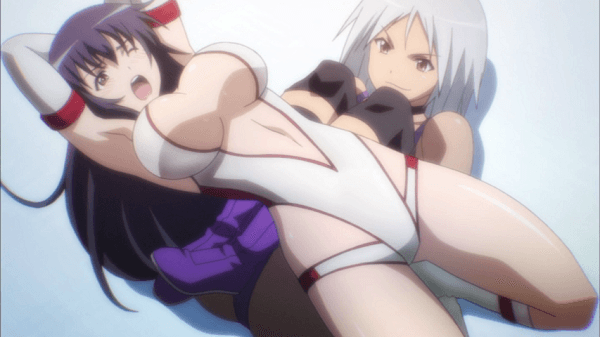 Now before we go into talking about the series, it is worth noting that the style of wrestling used in Japan is usually quite different from that in North America and Wanna Be the Strongest in the World! is going to be rather strange seeming due to these differences. While various striking, high-flying moves are still utilized and various slams are implemented in styles for effect, the majority of the moves happen to be submission holds in some form. This also leads to a ridiculous amount of cries of pain and anguish as the girl in the hold is twisted into a position. Despite looking into these match styles a bit, the amount of cries and pained moans is extremely exaggerated in this series to the point that well… you wouldn’t want to watch this series with anyone else in the area or they may mistake it for something else.

Another aspect abandoned in Wanna Be the Strongest in the World! are the concepts of teamwork that takes place inside of a ring between competitors. While most other sports anime will loosely adapt the rules of a sport to fit in various special powers or simply play it as realistic as possible, Wanna Be the Strongest in the World! sticks solidly to kayfabe and treats all the action in the ring as if the girls are actively trying to beat each other down, even going so far as to actively injure an opponent for a length of time. 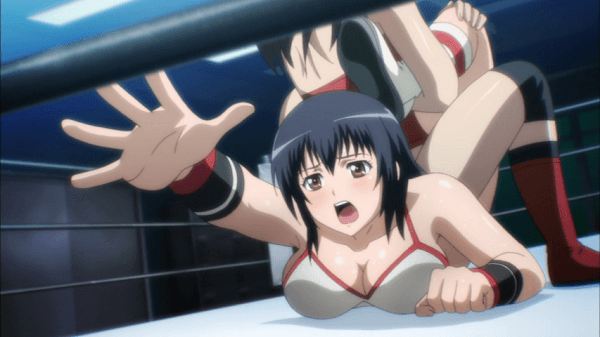 As far as the storyline goes, the central focus is of course on the wrestling aspects of things since the story follows Sakura’s arduous journey through match after match where she is embarrassingly defeated by the Boston Crab submission over sixty times in a row, pushing the believability of her abilities to an extreme as she never once tries to counter until forced to do so during practice, months after losing fifty times already. Where she then goes on to not only come up with her own special finishing move, and face off against other wrestlers from the industry. The actual idol aspect plays a minimal role though the relationship between Sakura and Elena, with Elena feeling unsatisfied that she now is the Center due to Sakura’s role in the wrestling world, being the main side-story though other aspects as relationships between other characters in the past does rise up from time to time only to quietly be pushed aside. 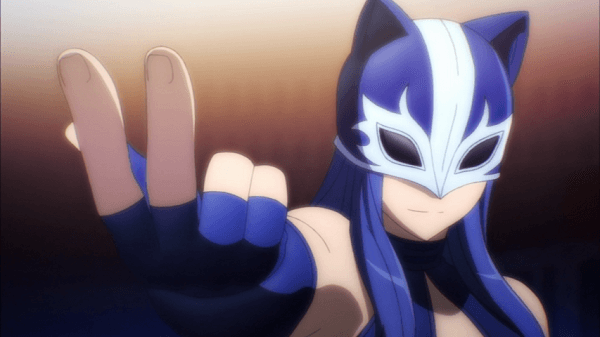 This does leave something to be desired as far as the writing is concerned, which also plays a factor in the ending, as Wanna Be the Strongest in the World! is an adaptation from a manga series that wrapped up shortly after the anime finished. With various threads left untouched and the less than satisfactory ending leaving more to be desired due to the revelation that occurs during the climactic final match. That being said, Wanna Be the Strongest in the World! does still feel like a fairly standard sports anime as Sakura powers through hardship and begins to slowly succeed over time, only this one happens to feature women in skin-tight attires being stretched into painful holds.

Visuals
This is the type of series that is built around fan service shots. While some members of the cast wear some unique outfits, these are all side-characters and all of the prominent female wrestlers in this series sport tight wrestling outfits that are designed perfectly for the camera to aim right at the crotch of these girls anytime they are put into a submission hold of any kind or slammed down. This does have some element of showing how tight a hold may be locked in but it is prominently so viewers get as close up of a shot as possible. Of course for actual nudity there is still some found in shower sequences as well as the OVAs that will be mentioned in a bit. 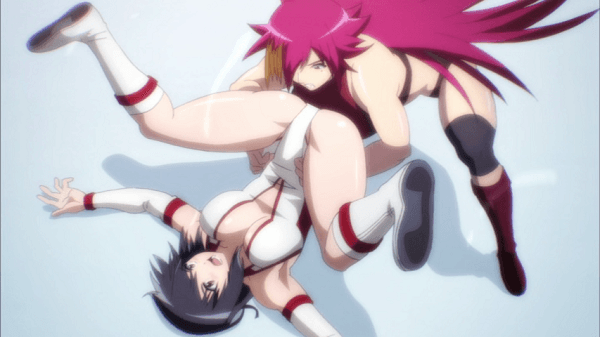 This unfortunately doesn’t translate to most other wrestling moves used in the series as the majority of moves are either handled through cutaway shortcuts that do not show a move actually being executed, only the grab and landing, and even then there are very few moves even used throughout the series. The minimal amount of idol performances are handled quite well thankfully and the crowd in these scenes are well handled, though the same cannot be said during wrestling sequences as the crowd usually appears incredibly cheap looking.

Audio
With the release of Wanna Be the Strongest in the World! FUNimation has opted to include an English dub for the series to accompany the original Japanese voice track. As mentioned before, due to the series’ enthusiastic love for pained moans and cries, this isn’t a series you’ll want to listen to loudly but for the most part the English voice work is handled very well while most of the song performances by Sweet Diva and the rest of the cast are still presented in their original Japanese format.

The soundtrack for the series is fairly standard, with a few of the girls given special opening themes that are extremely brief and relatively rare while the insert songs are enjoyable. The opening theme “Beautiful Dreamer” by the Japanese voice actress for Misaki is fitting for the series but ultimately forgettable while “Fan! Fanfare!” by the Sweet Diva voice actresses serves as an energetic closer accompanied by fitting animation.

Extras
The bonus content for Wanna Be the Strongest in the World! comes with two episode commentaries, clean versions of the opening and ending theme, the US trailer for the series, and a collection of six English dubbed OVA shorts, half of which focus on placing the female wrestlers in heavy fan service moments such as oil wrestling and more featuring plenty of nipples and grinding while the other half does spend some time on the actual wrestling side of things serving as a decent balance. 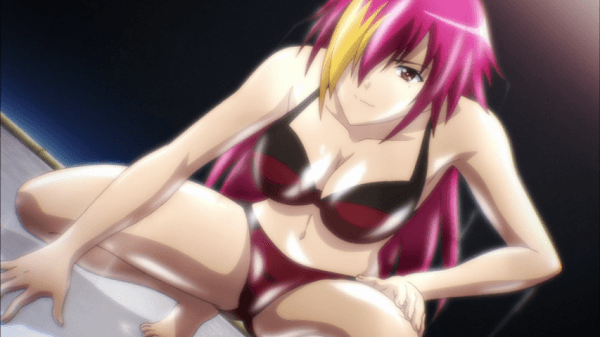 Overall
Hidden beneath the camera angles zoomed in on a girl writhing and crying in pain in the Boston Crab and heavy fan-service element there is still something of a worthwhile series here in Wanna Be the Strongest in the World!. Although the vocal pain may be something that would drive most away, those who do stick with the series will find a guilty pleasure of sorts with a sports anime unlike any other with a few different twists tossed in near the end to try and wrap things up.